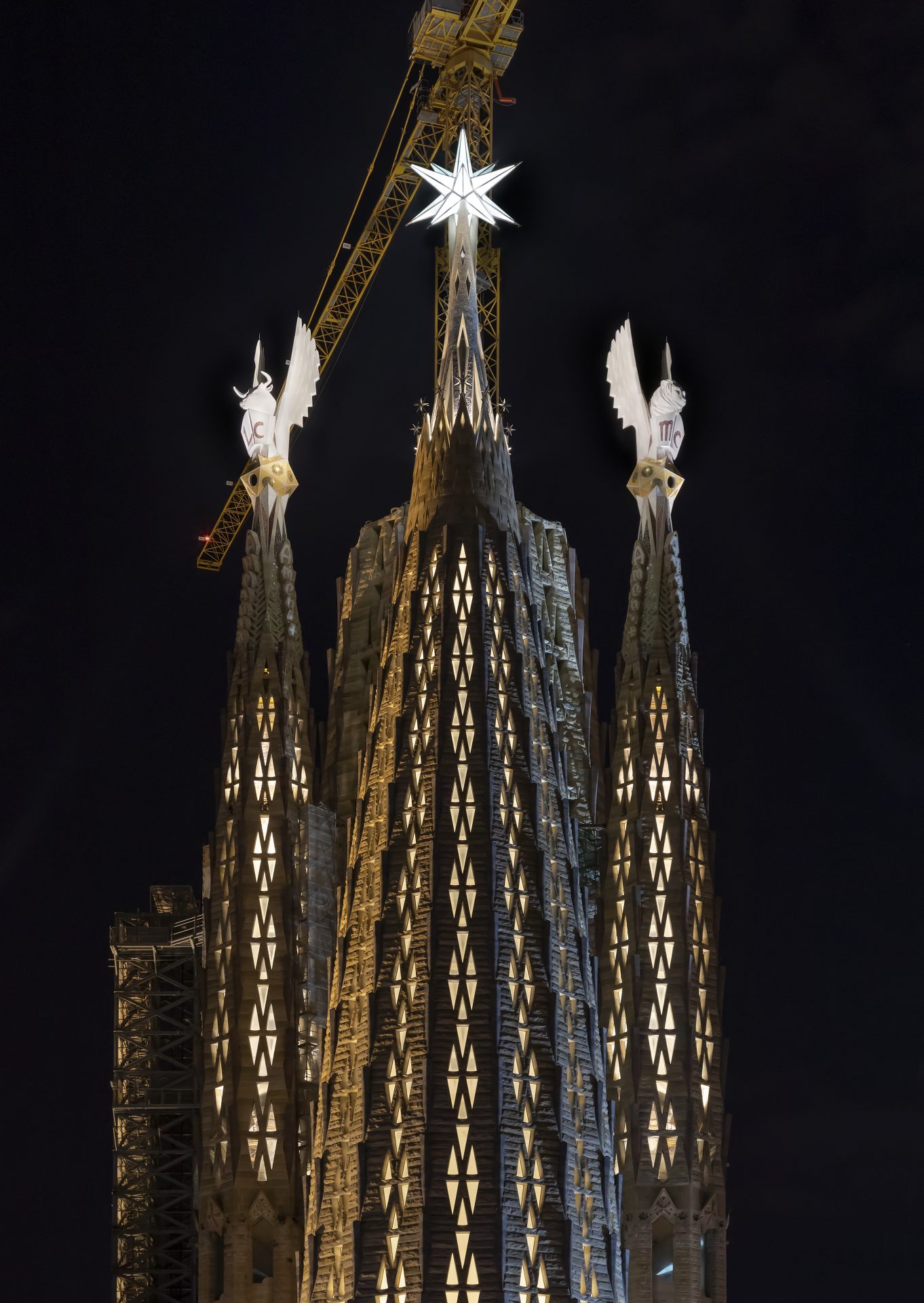 At the end of 2021, the iconic star of the Virgin Mary was illuminated for the first time, crowning one of the central towers of the church of the Sagrada Família. Since 16 December 2022, two new landmarks at the Barcelona skyline have been shining next to the star, the Evangelists’ towers of Mark and Luke. After the traditional Christmas concert, the illumination of the towers of two of the four Evangelists was solemnly inaugurated and presented to the city and the world. Mark is crowned with the sculpture of the lion, and Luke with the figure of the ox.

Six of the eighteen towers planned by Gaudí for the Sagrada Família form the central nucleus of the world-renowned Basilica. The two completed towers are located on the north side of the Basilica and for the end of 2023, the completion of the towers of Matthew and John is planned, which will allow the long-awaited inauguration of the whole Evangelists’ complex.

The base of the tower is vertical and has more elongated openings than the body of the tower. Inside the tower, a spiral staircase with a stone railing allows visitors an impressive climb up. The body of the tower has triangular openings, like in the tower of the Virgin Mary, which allow natural light to enter the inner core and reveal the interior lighting at night.

The terminals are similar to those of the bell towers on the facades and composed of three elements: the hexagonal shields with the praises Amen and Alleluia are at the bottom; above the shields there is an icosahedral decorated with gold-colored trencadís, and finally there is the figure corresponding to the tetra morph with the book and the grand wings on top. The sculptural ensemble of each Evangelist is 4.5 meters high and can be boldly seen from the city.

To achieve harmony in the lighting design for the church’s nocturnal image, each part of Gaudí’s architecture is treated individually, always considering the holistic approach to the entire building and its adequately subtle nocturnal appearance.

The interior and exterior lighting of the Evangelists’ towers is harmoniously balanced. Mounted underneath the spiral staircase slab in the towers, the lighting is directed towards the interior walls, illuminating them in a soft and homogeneous manner as well as the staircase itself. At night, the interior lighting, with a color temperature of 3,000 K, gently emanates through the triangular windows and allows the observer to perceive the volume of the tower.

The exterior illumination of the Evangelists’ terminals is provided from the highest levels of the church. A total of four LED projectors for each tower illuminate each sculpture of the Evangelists Mark and Luke and allow a symmetrical and homogeneous rendering of each side.

The spotlights installed on the crown of the terminal of the Virgin Mary tower are integrated between the tips of the crown and house twelve narrow-beam 15-degree optics in each fixture. The combination of two narrow-beam projectors and an anti-glare ring to control the light makes it possible to precisely illuminate the entire sculptural ensemble favoring the modelling with a soft light that highlights the whiteness of the figures and the golden braiding of the icosahedral.

Two more projectors, with a much narrower beam and additional anti-glare rings, are integrated into an icosahedral in the towers of the Apostles. These are oriented towards the terminals, completing the lighting in a symmetrical manner and modelling the figures. With twelve independent lenses and a 6-degree optic each, the projectors allow precise control of the light.

The figures of the ox and the lion with the book and wings emerge magically from the blackness of the sky under the soft projected light. They are shown in a beautifully balanced light flow in combination with the star, illuminated with cooler light from inside with 4,000 K.

All luminaires in the towers are controlled by a DALI system, allowing maximum flexibility with full dimming and scene programming. This powerful control system makes it possible to seamlessly integrate the new lighting into the current and future lighting scheme within the overall illumination of the Basilica.

Since December 2022, the Sagrada Família church and the Barcelona sky have two new landmarks, which glow white and bright in the sunlight and subtly accompany the star of the Virgin Mary at night. 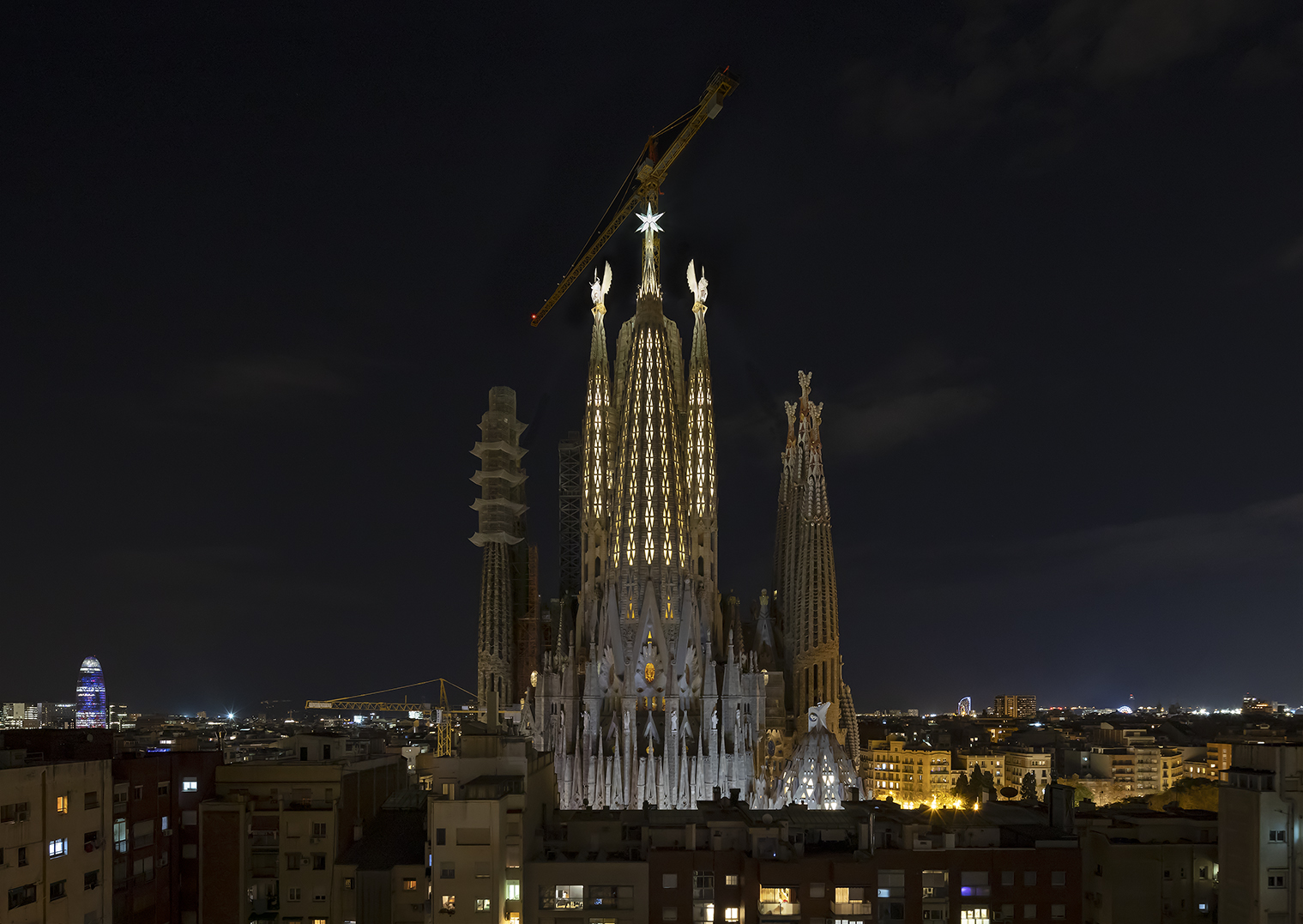 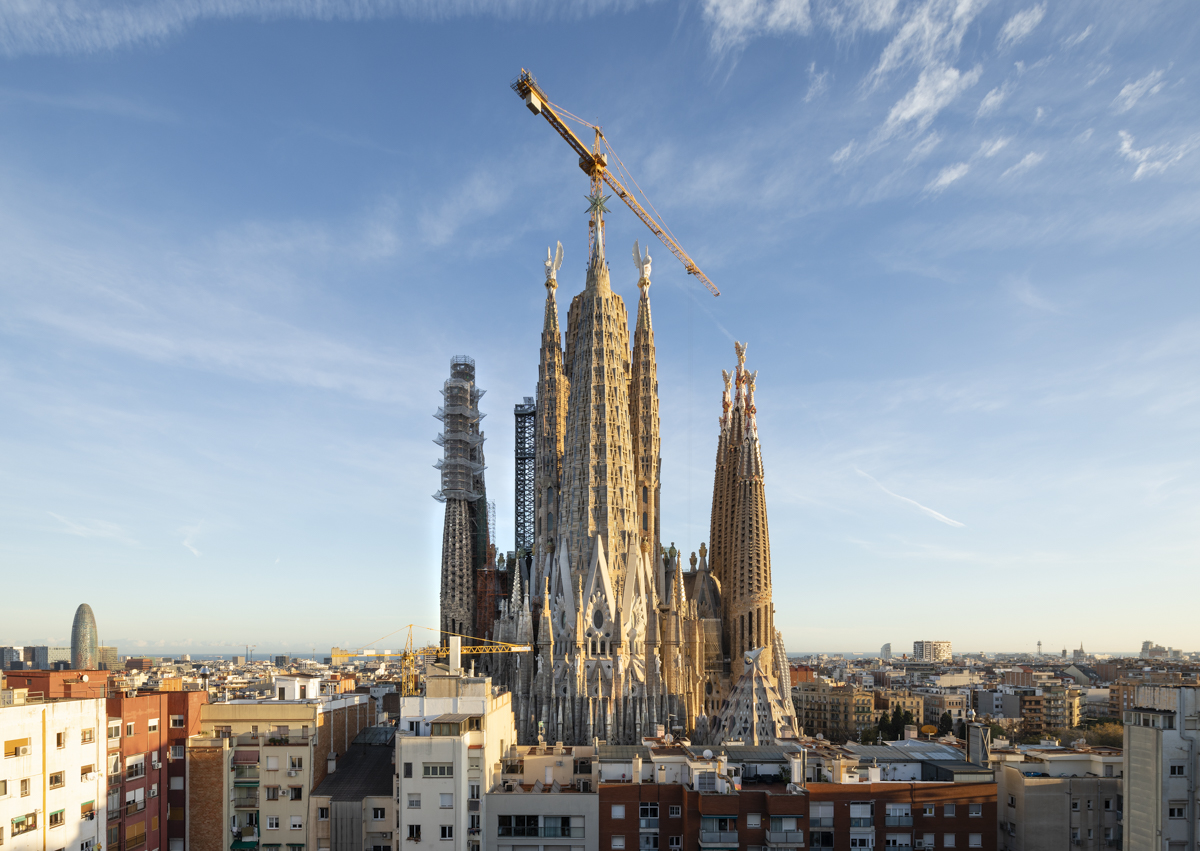 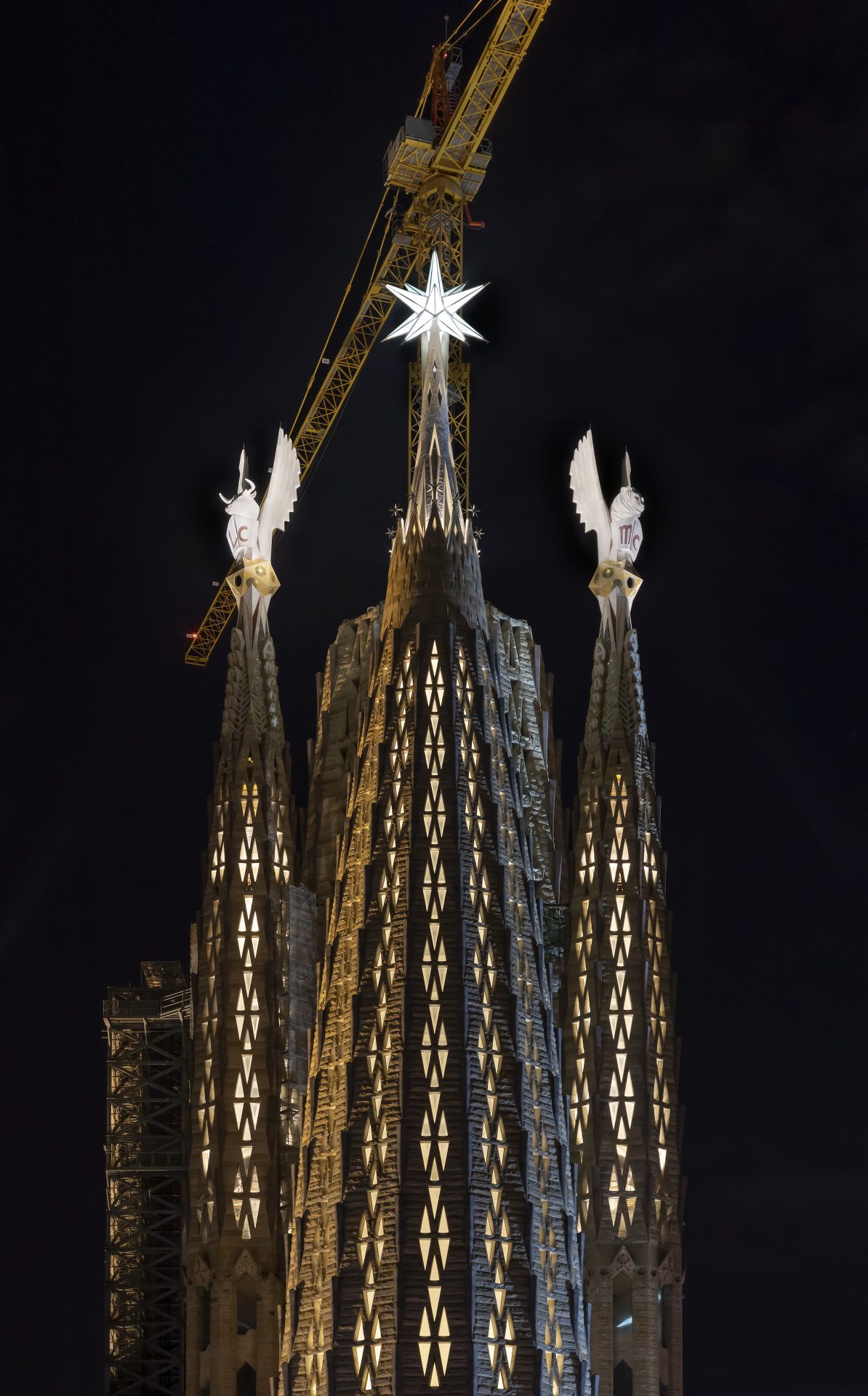 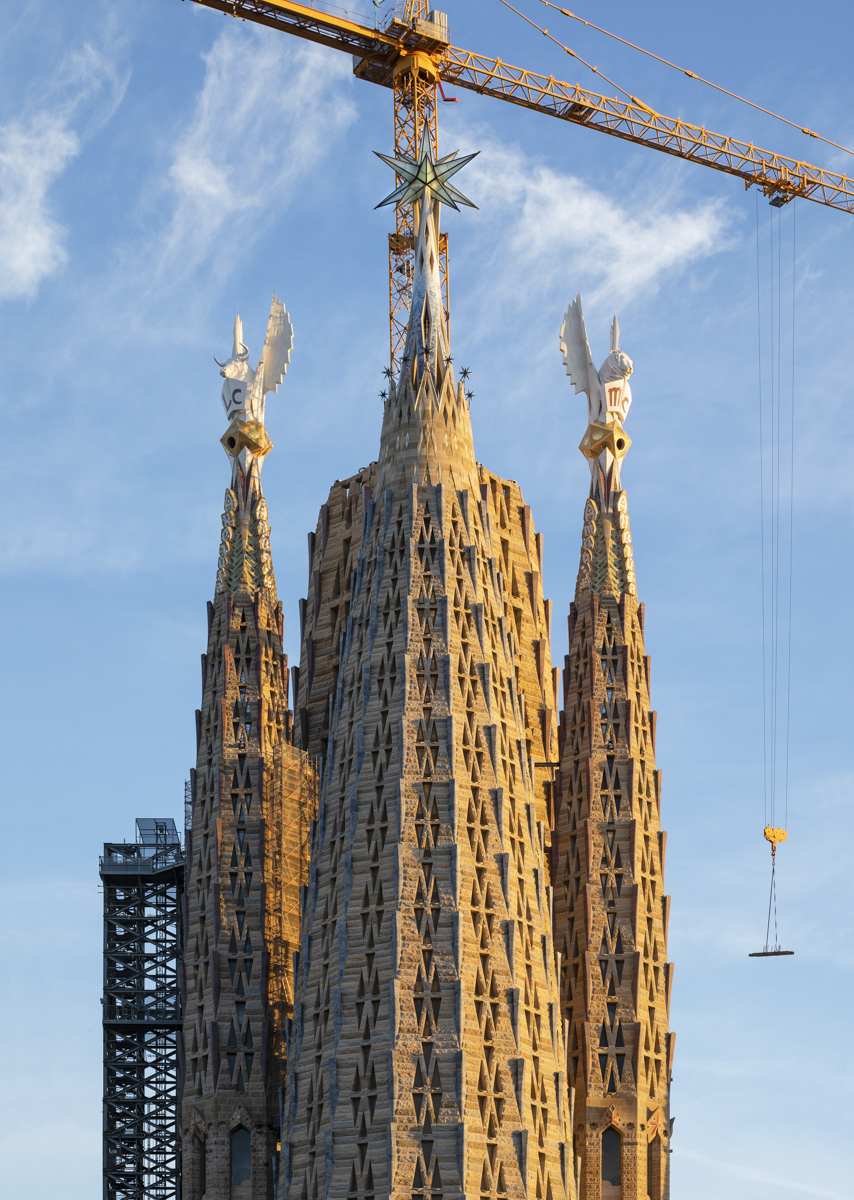 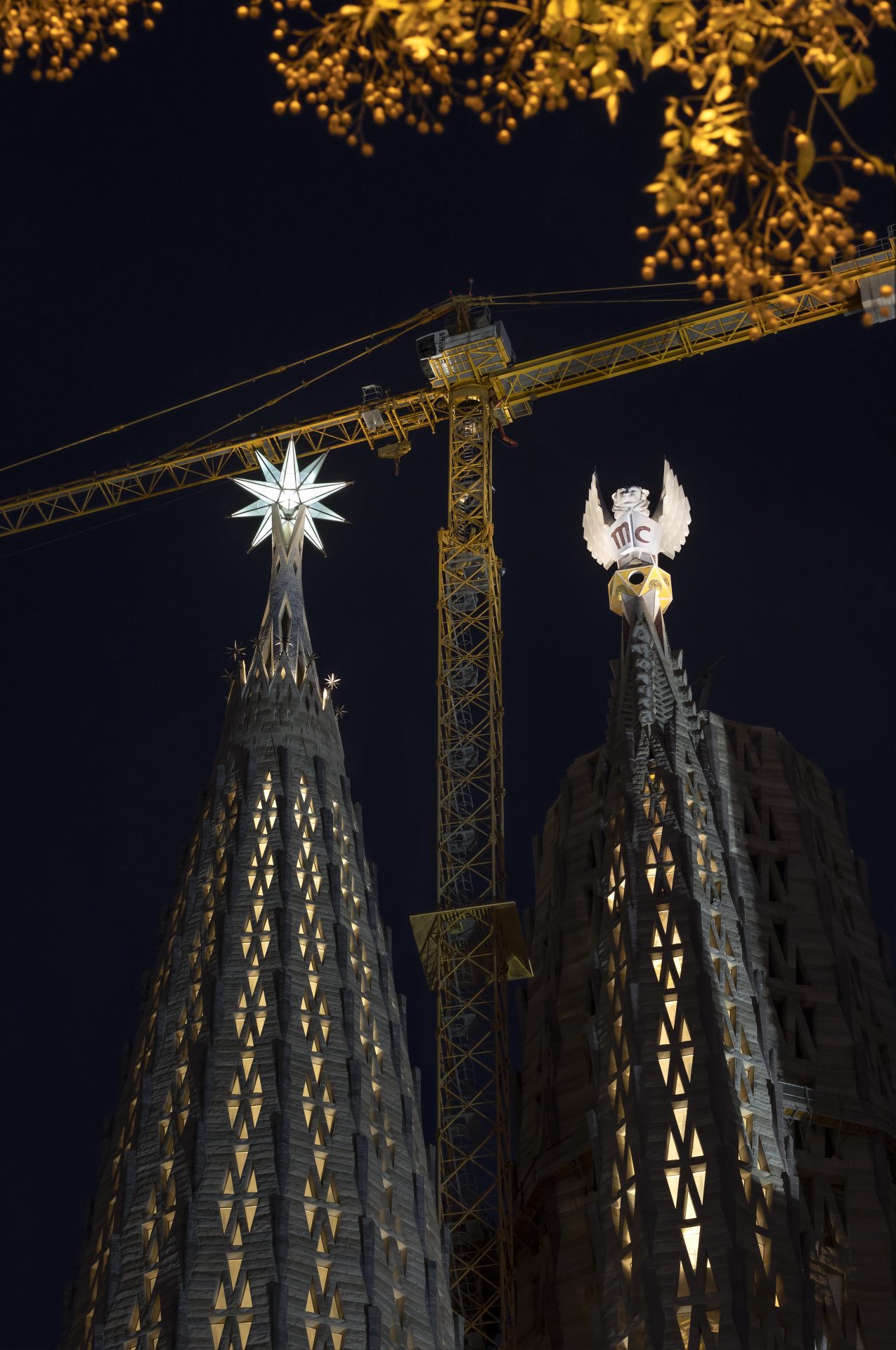 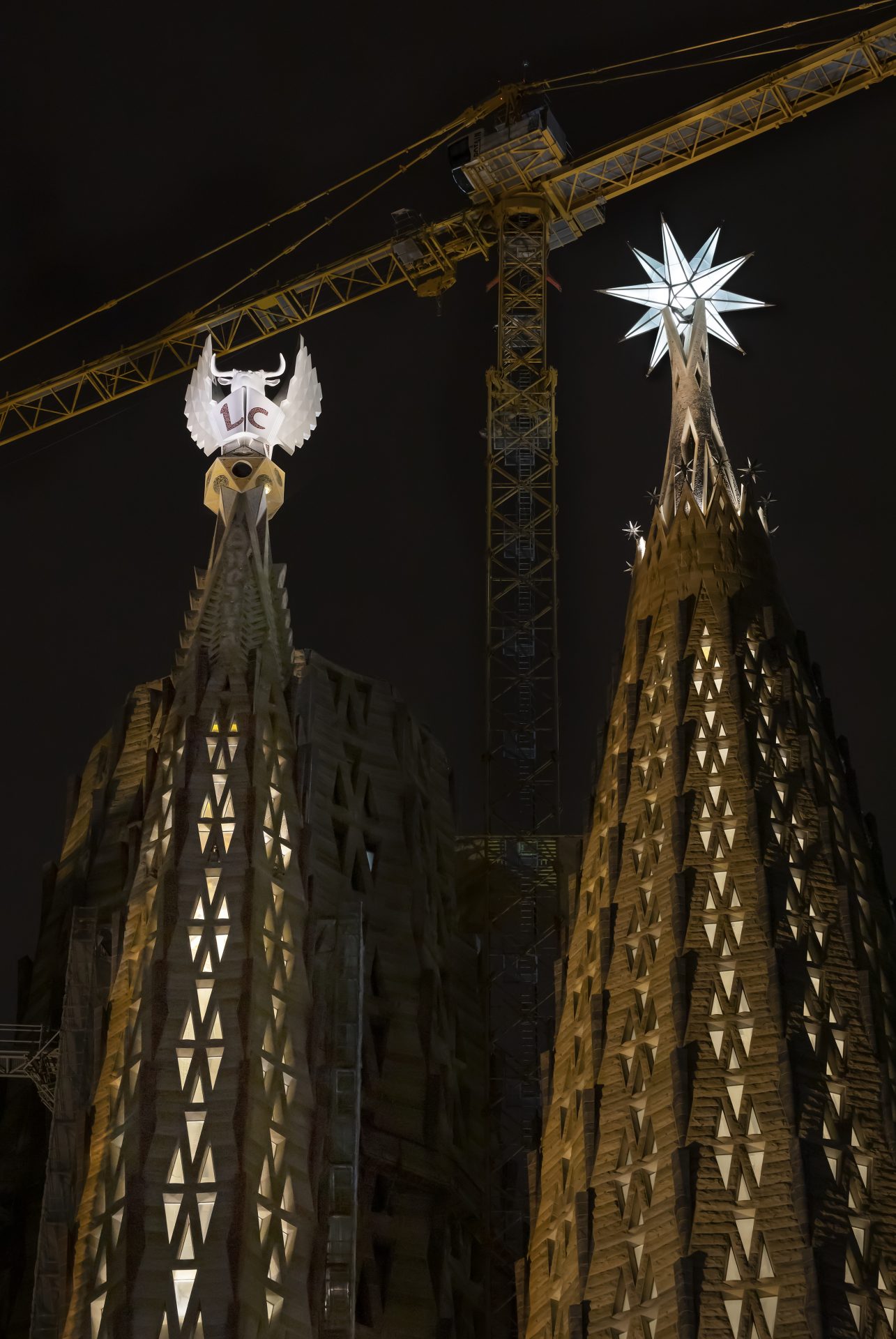 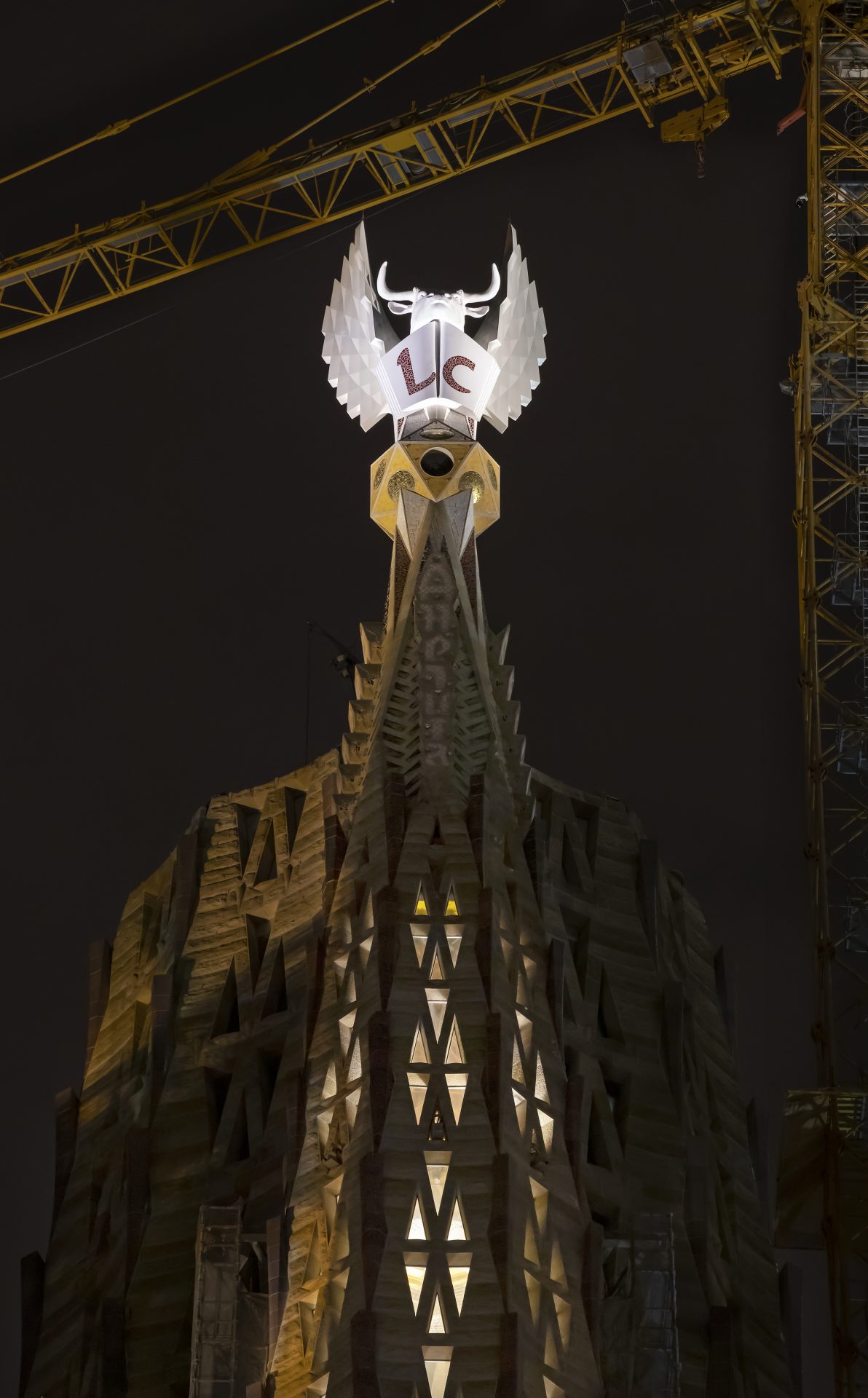 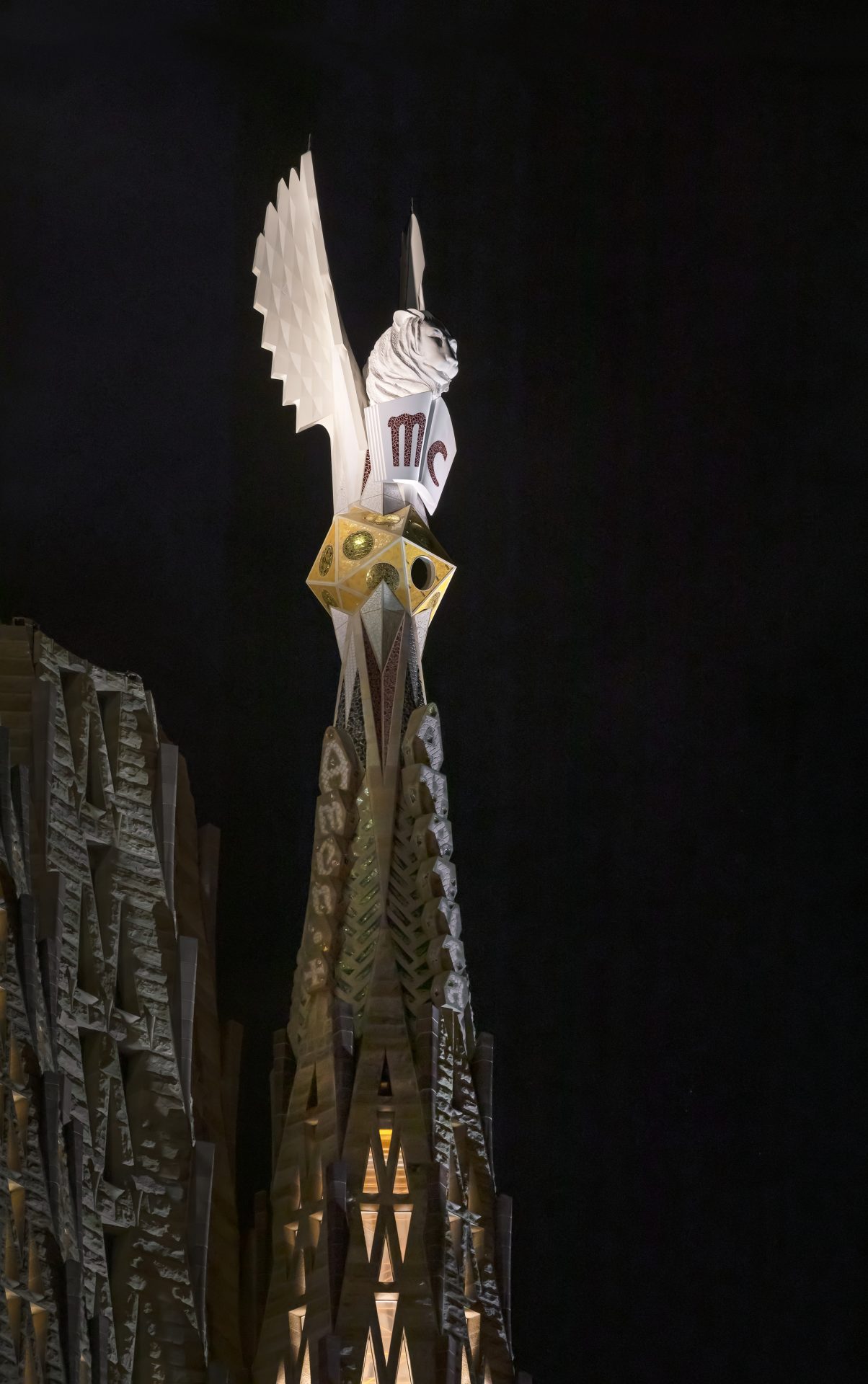