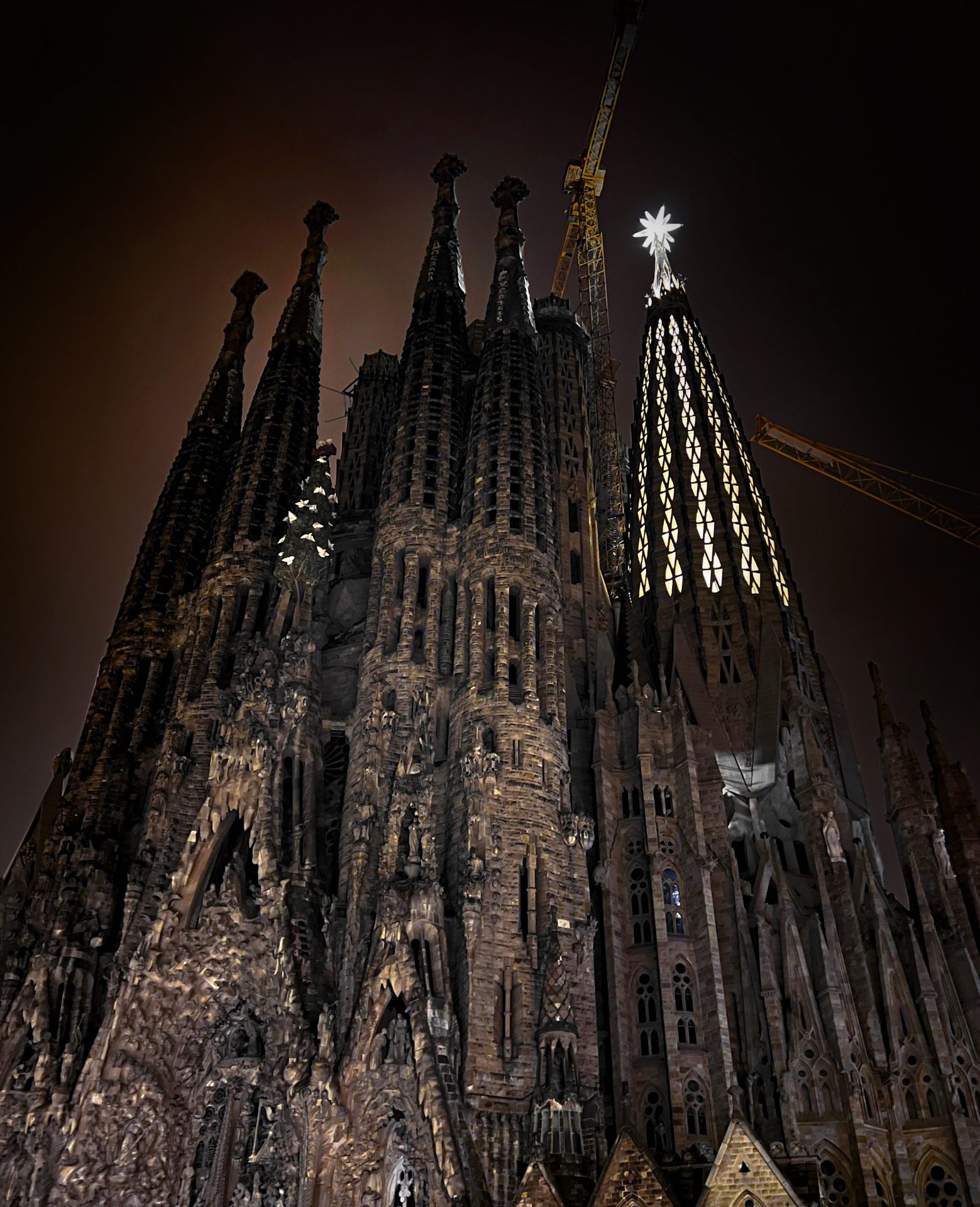 Tower of the Virgin Mary at Sagrada Família

Located in the Eixample district of Barcelona, the place of worship is a landmark in in the city and one of the most visited sights in Spain. Before the outbreak of the pandemic, more than 4.5 million visitors were counted annually.

The Sagrada Família will have 18 towers when Gaudí’s magnificent work since 1882 will have been completed. Each of the architectural elements has a symbolism that relates it to its entirety. Likewise, each of the towers also has a symbolism and hierarchy underlined by its height.

The tower of the Virgin Mary, located above the apse of the church, is 138 m high and will be the second tallest after the tower of Jesus Christ, which will measure 171 m. This height is slightly lower than the altitude of the Montjuic mountain in Barcelona, and as this mountain represents the work of God according to the architect, he decided that the temple should not superelevate for reasons of respect.

At the beginning of the project, the most important task and challenge was to get to know the architecture of the basilica in its entirety. It was crucial for the lighting designers to thoroughly understand and read Gaudí’s architectural intentions in detail to be able to provide adequate lighting solutions within the overall framework of the project. The lighting concept is based on Gaudí’s ideas: “…His crowning star must be a luminous element at night, and during the day a non-transparent architectural element, so that it does not become dematerialized. The luminosity of the star must not be excessive, but rather dim to avoid the architectural dematerialization of the star…”.

The illumination the tower consists of three components adding to a well-balanced overall scheme: the interior lighting, the lighting of the crown and shaft and the illumination of the star.

Inside the tower, there is a large central hyperboloid which filters the natural light falling in the windows of the tower towards the presbytery during the day. During nighttime, the inner skin of the tower is illuminated from the top of this hyperboloid. Three groups of luminaires with different optics are placed on top of it and provide a soft and uniform illumination of the walls. The reflecting warm white light with a color temperature of 3,000 K indirectly illuminates the interior space and emanates through the windows of the tower as a gentle glow.

The lighting designers followed this premise and developed a respectful, subtle and discreet lighting concept that complements the fascinating architecture of Gaudí and allows it to be admired from near and far.

At the terminal, the crown is shaped through the illumination of the shaft, which starts from the crown and supports the star. The shaft is gently illuminated from bottom to top by means of 12 small narrow-beam spotlights directed towards the facade. A finely tuned gradient from bright to dim light puts the star in the focus of this striking architectural composition.

In favor of a noticeable far-distance effect, the star is additionally lit from the inside. It is the only tower that is crowned with a luminous body and represents the morning star as a symbol of Mary. Inside the star, there are 12 projectors custom-developed for this project, one for each point of the star.

The color temperature chosen for the illumination of the star and highlighting its glass structure is 4,000 K – the light color appropriately contrasts with the warmer hue of the facade lighting.

The entire set of luminaires in the tower is controlled by a DALI system which allows maximum flexibility in dimming and scene programming. This makes it possible to display the tower and its terminal as the most prominent elements or to integrate these elements into the basilica’s illuminated ensemble in the future.

During the day the star is illuminated by sunlight, while at night, the star emanates light from inside and becomes an iconic beacon and a strong visual point of reference in the sky of Barcelona. 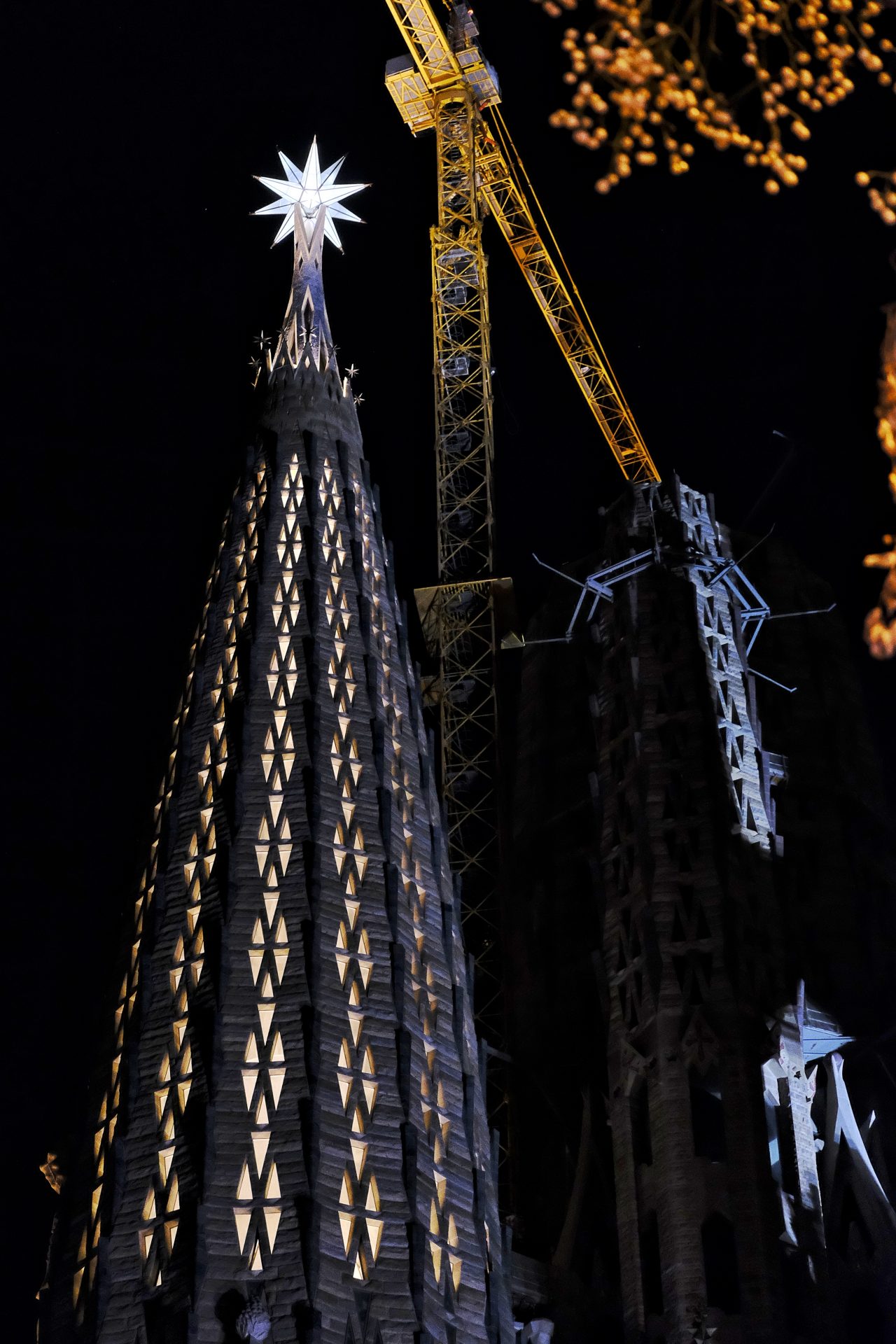 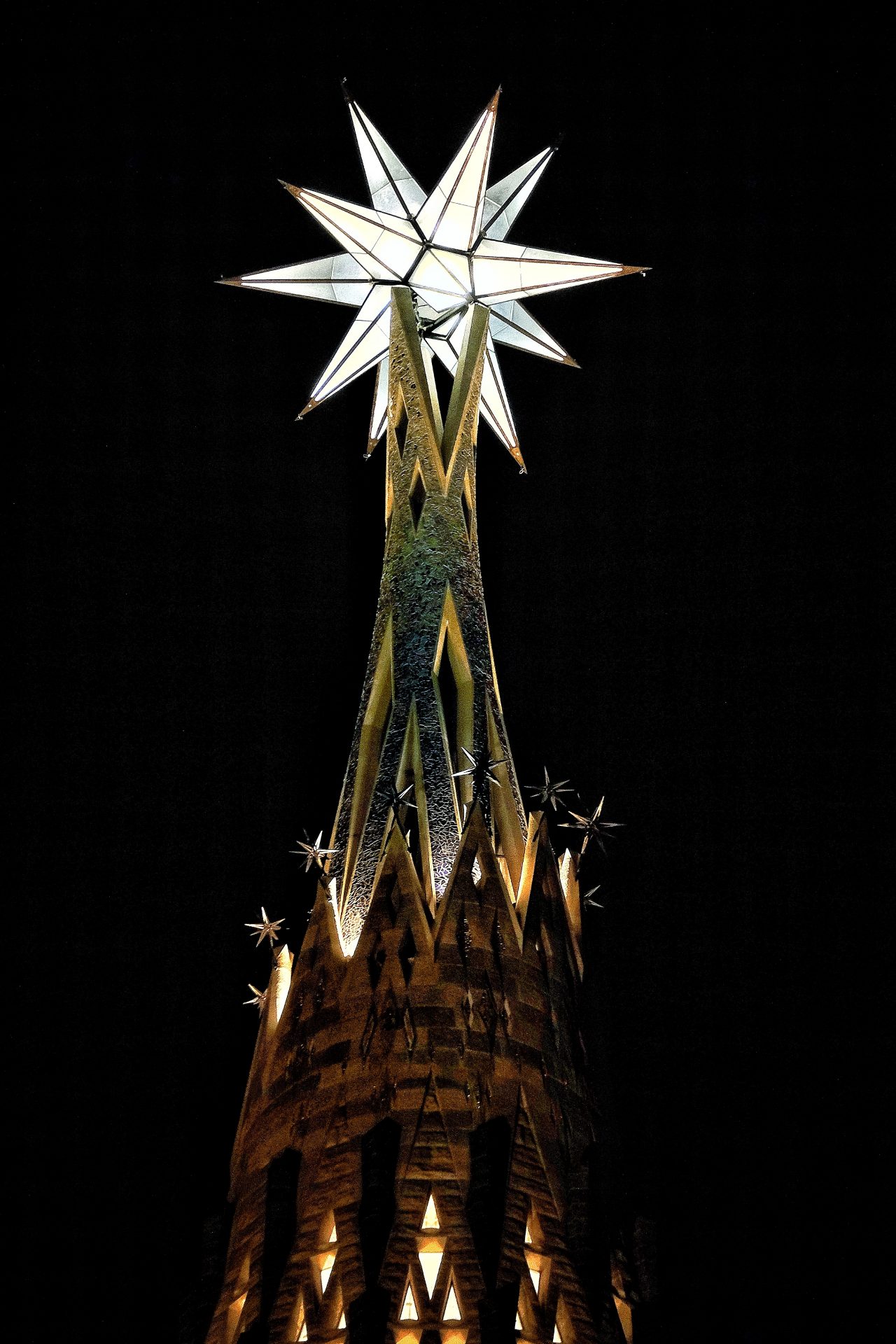