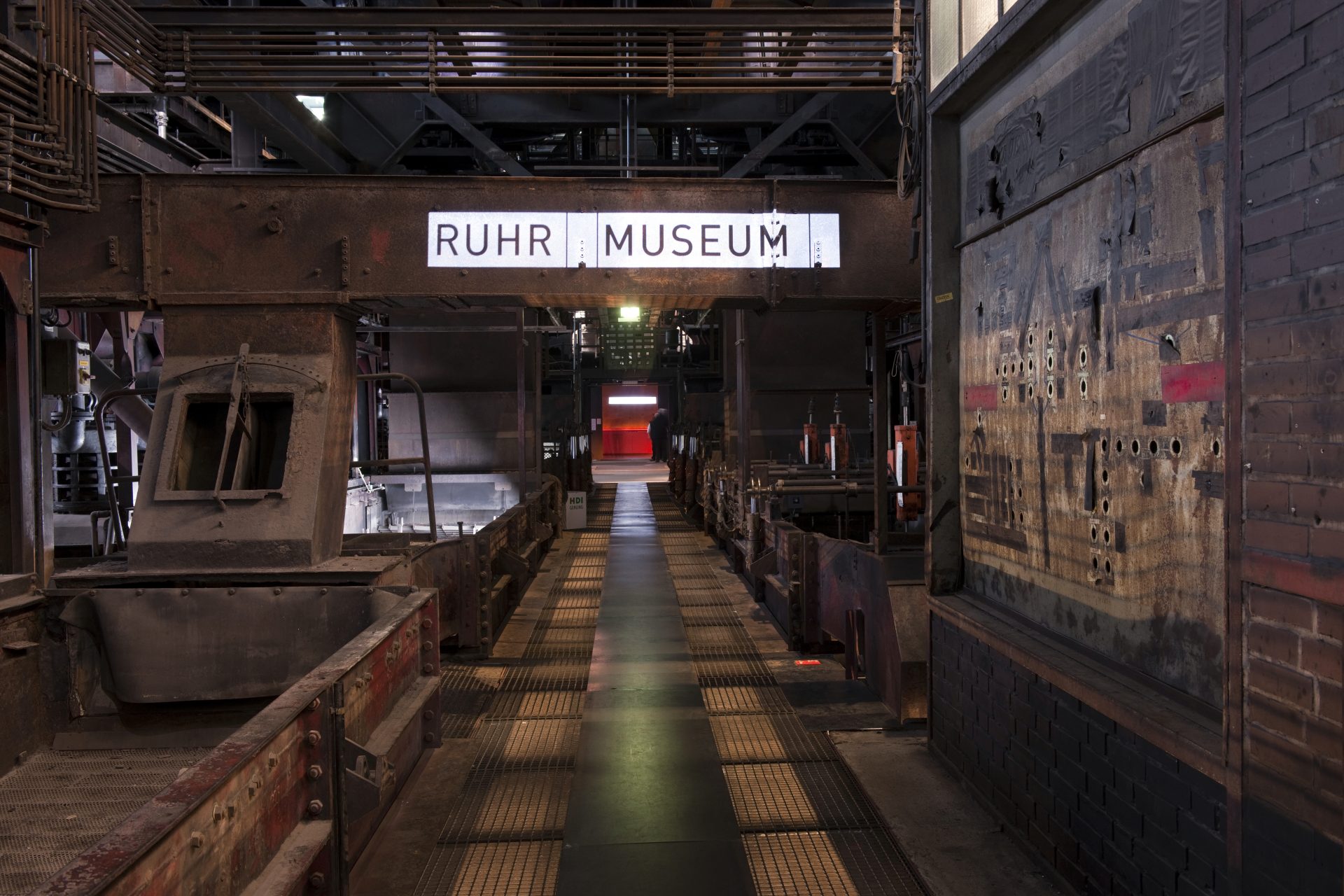 The Ruhr Museum in Essen

As one of the most beautiful and fully preserved collieries in the world, the Zollverein Colliery is a particular magnet for visitors to the Ruhr region. In 2001, the site was designated a World Heritage Site by UNESCO and has received international attention ever since.

The Ruhr Museum is a place that offers visitors a cultural combination of industrial history and art in the closed down machinery of the coal washing plant. The brute architecture of the building, which forms the shell for the massive coal washing machine, impresses with its functional aesthetics. The atmosphere of the place still tells of the noise, the coldness and, above all, the humidity by which it was determined at operating times. Daylight coming in from the side immerses the entire scene in a cool blue haze, which further emphasizes the sobriety of the facility.

The lighting concept conveys and interprets this special mood. The artificial light is not perceived as such, but appears as a natural feature and thus integrates itself inconspicuously into the overall picture.

The complex architecture of the building and the most diverse exhibitions in the Ruhr Museum automatically asked for divergent quantitative and qualitative demands on the lighting, which were further intensified by the building’s division into two parts: On one hand a massive multi-story reinforced concrete body on which stands a steel skeleton, whose facade is lined with brick and has a great amount of windows, and on the other hand a concrete base with only a small amount of daylight, in which there are massive silos with funnel-shaped outlets, which were made functionally neutral by means of intensive concrete renovation, the insertion of a suspended ceiling and the removal of all non-stationary machinery and conveyor belts to become merely an overwhelming backdrop for exhibitions.

The main criteria for the lighting concept was to find an element for the multi-layered structure of the building that was adaptable so that it could be used in most of the public areas.

This complex task was solved by using a “luminaire track” as a support for a wide range of different applications. This element consists of two cable tracks with a flush-mounted power rail integrated between them. In areas with low ceilings, these tracks are mounted directly on the ceiling while in high rooms the profile is suspended and additional indirect lighting is provided by fluorescent lamps. In this way, a homogeneous indirect basic lighting is created and the luminaire itself is not identified as such. 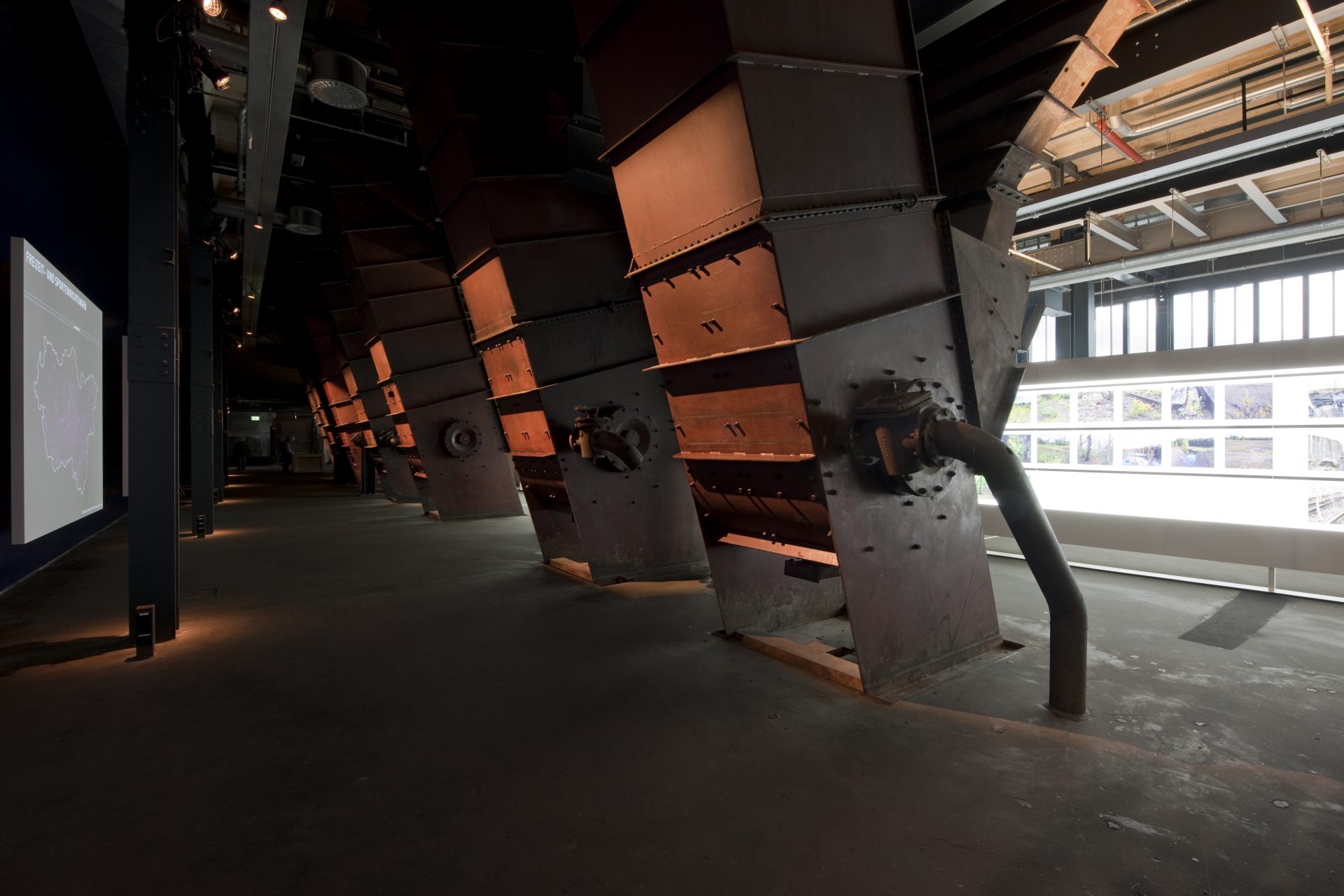 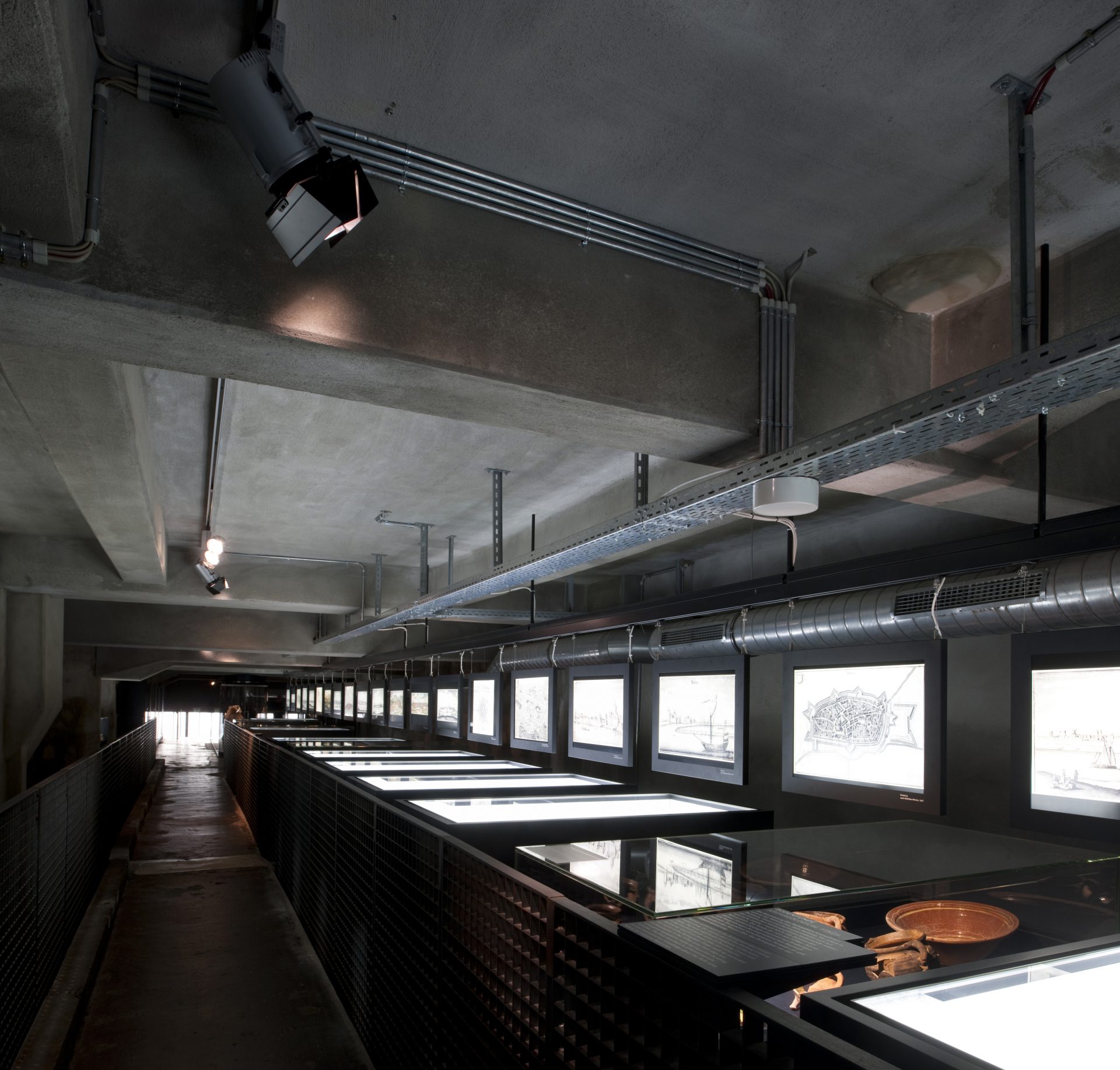 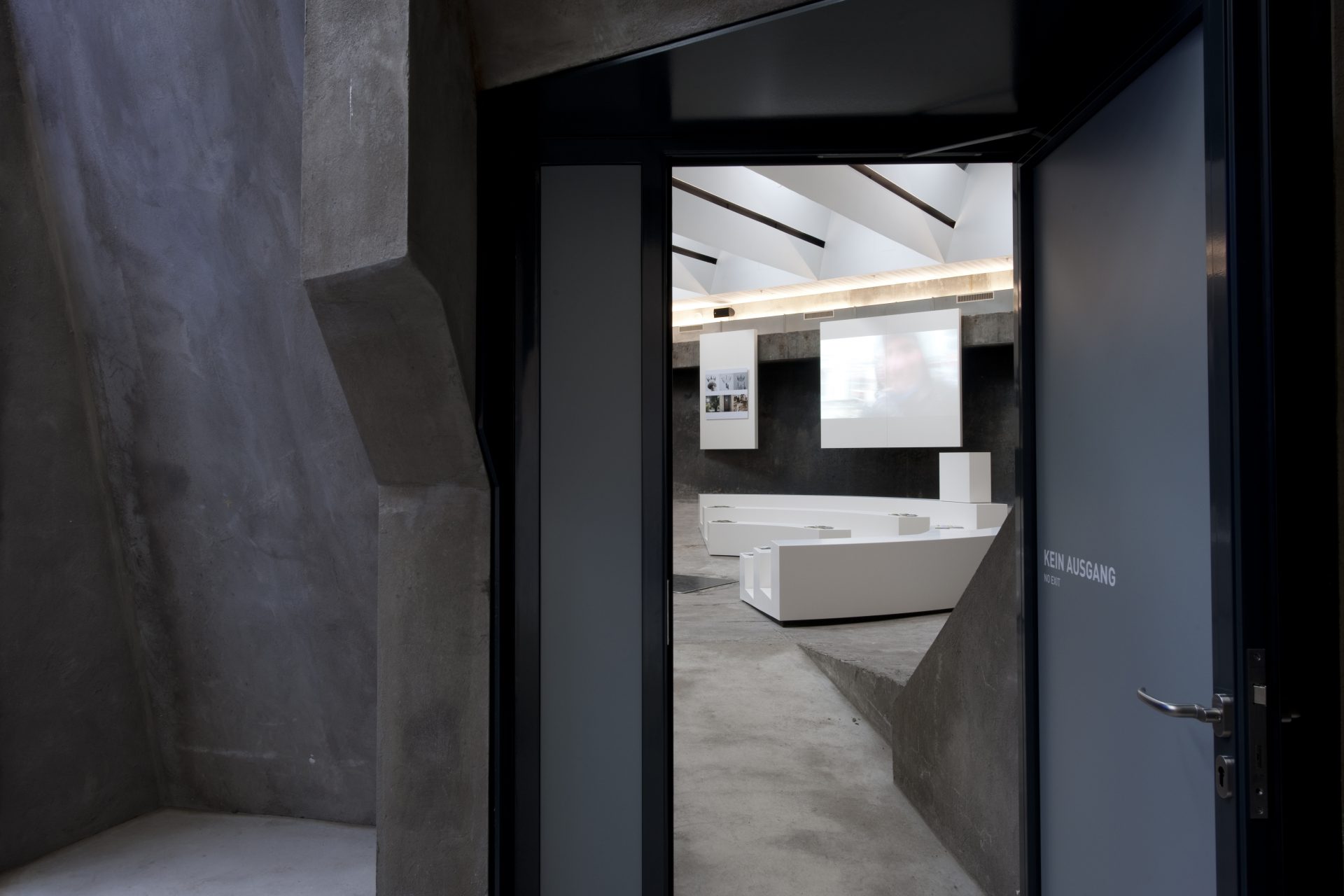 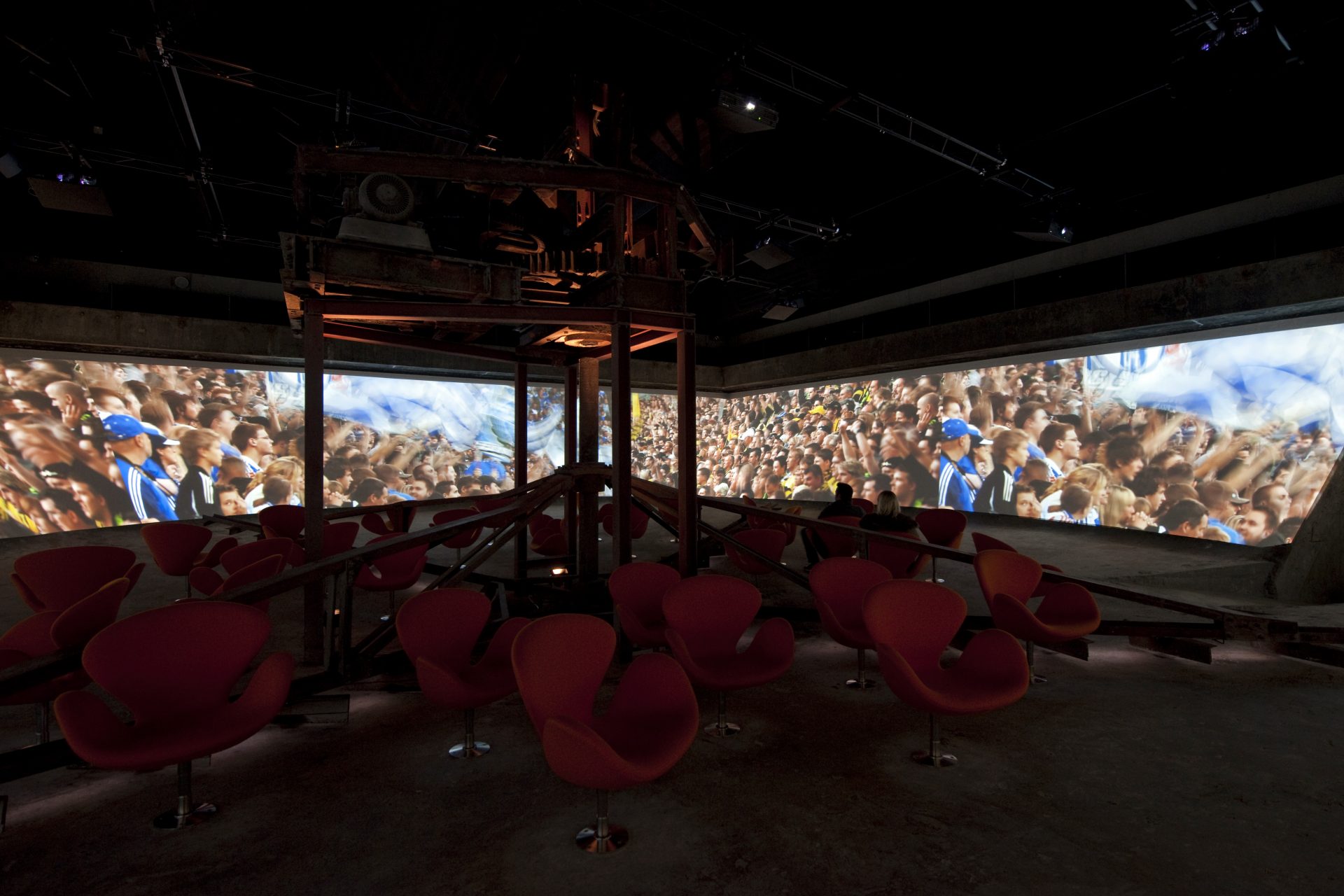 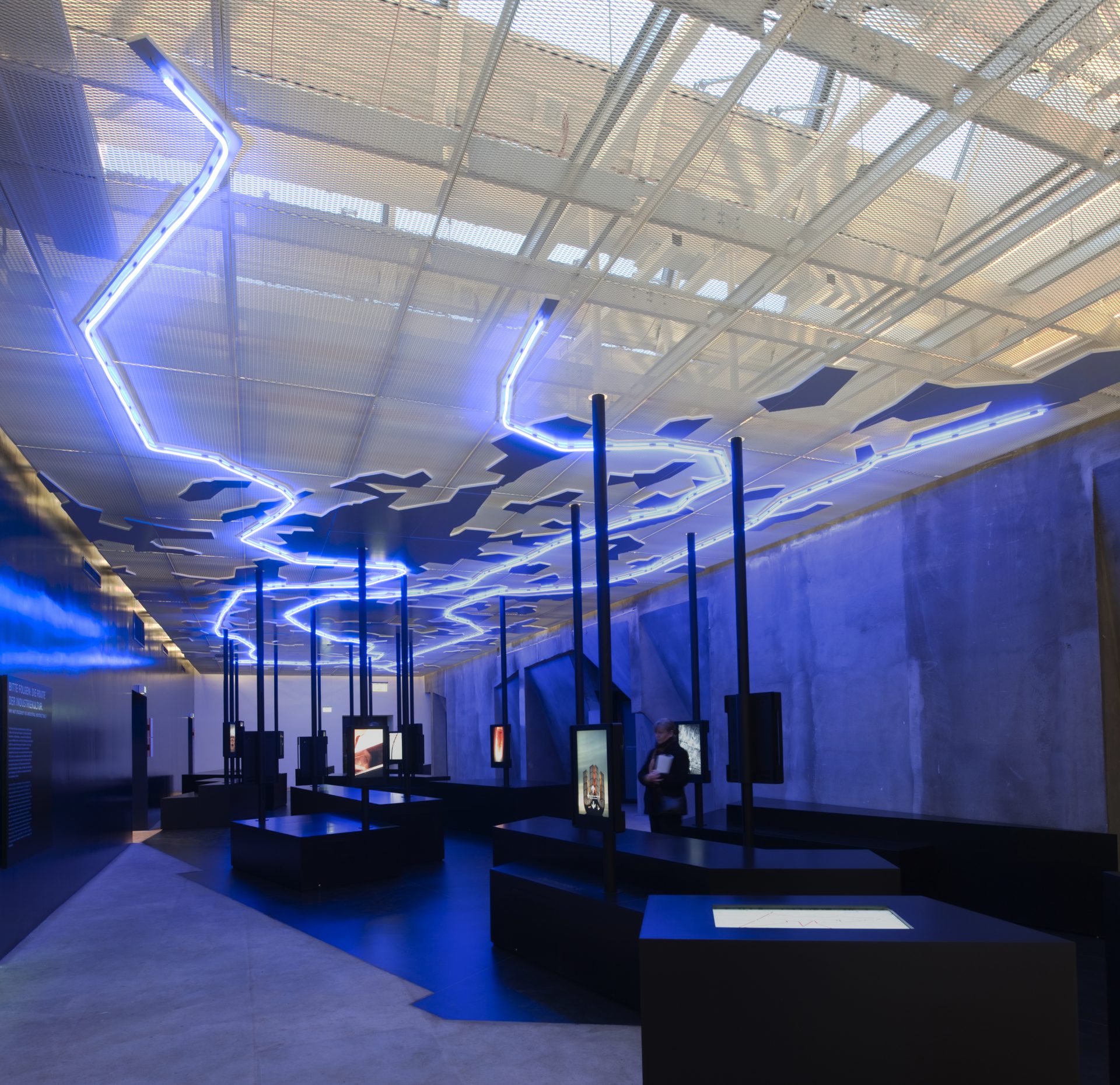 Visitors to the Ruhr Museum approach the building via a “gangway” and reach the visitor center above it. The gangway accommodates two escalators and a single flight of stairs. LED handrail lighting provides basic brightness for the stairs, while the colored translucent stringers of the escalators are backlit with fluorescent lamps.

The foyer, enclosed on three sides with glass, is bathed in a warm light via surface-mounted downlights while the back wall is specially staged by a two-dimensional mural. In the dark, this is particularly illuminated by means of a vertical grazing light. The visitor center is very versatile in its structure and, as a reception area, accommodates many different functions in addition to the exhibition, such as the ticket office, a café and a bookshop. Most areas can be illuminated by the previously described track lighting, but this is only possible to a limited extent in the central part.

The area of the permanent exhibition on level 6 is defined by the concrete funnel outlets of the coal silos above. Here, cable routes with conductor rails are mounted directly under the beams in every second transverse axis. Since the routes for the power supply have already been provided, the fusion of several tracks in one element is again successful at this point. In the other axes, only conductor rails are used. The basic lighting is provided by light strips located in the support niches.

Level 12 with permanent and temporary exhibitions is located inside the silos and is a newly created area due to the installation of a suspended ceiling. Conductor rails and safety lighting are integrated into the longitudinal axes of the red expanded metal ceiling. Homogeneous architectural lighting is ensured via light strips that can be inserted into the conductor rails. 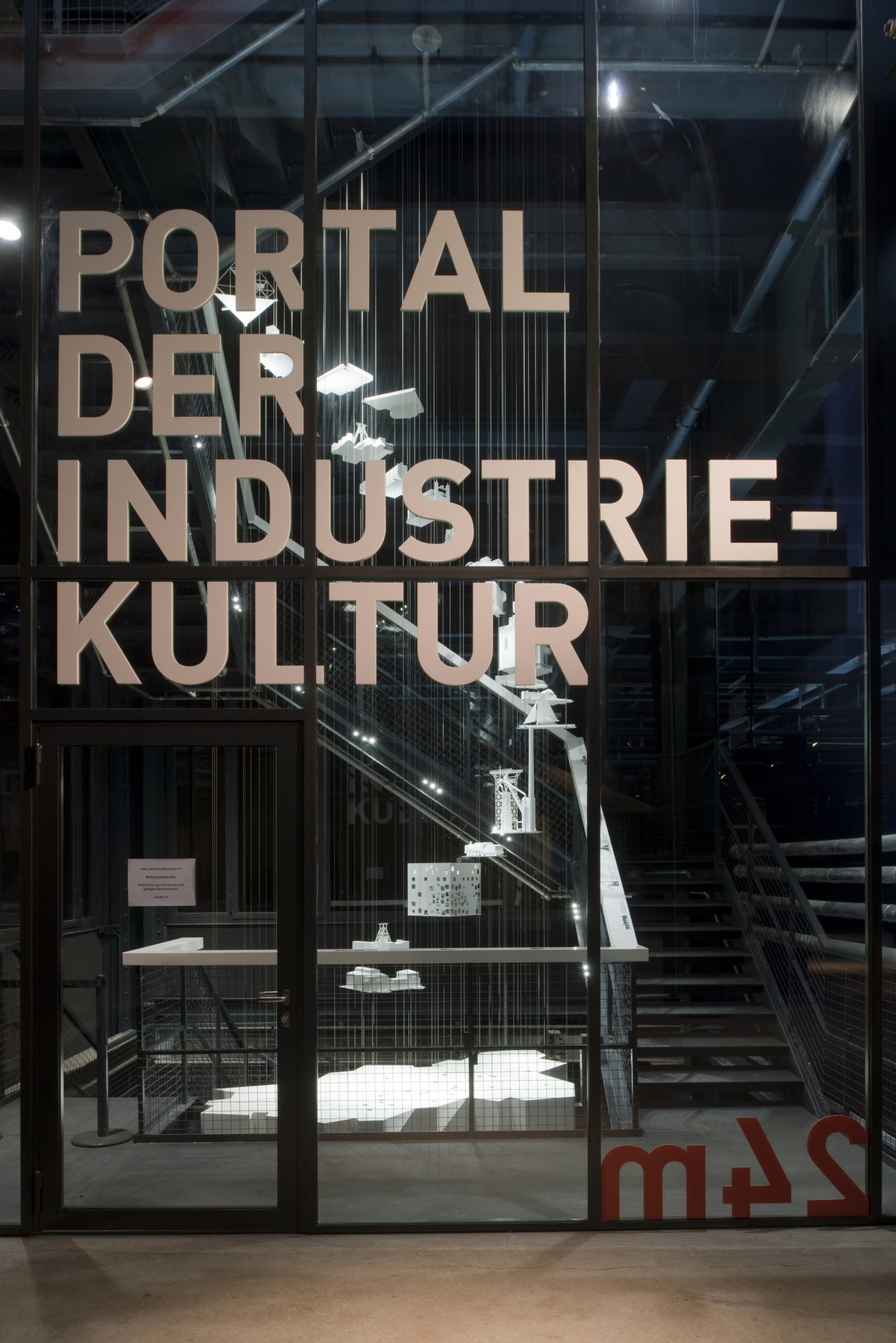 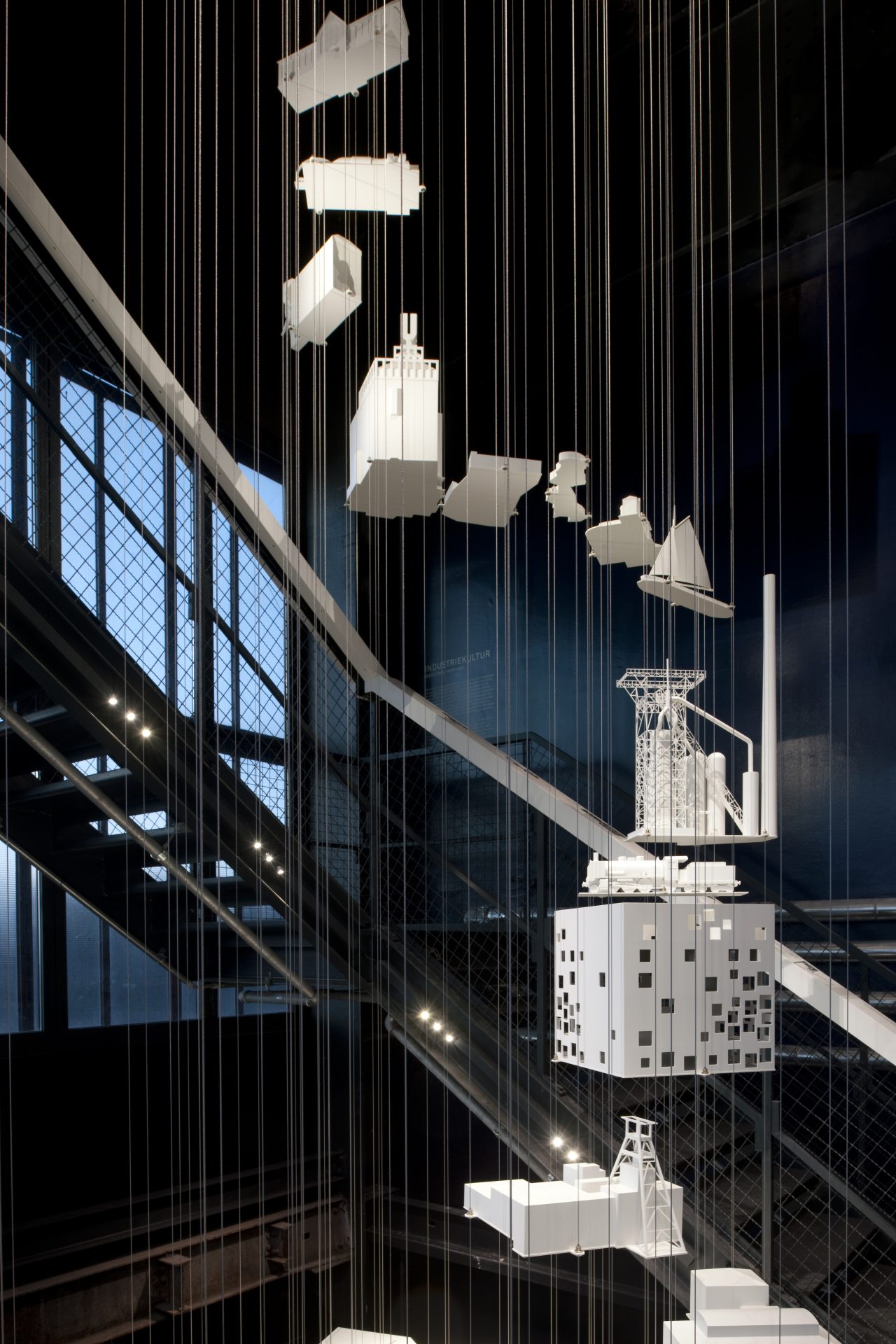