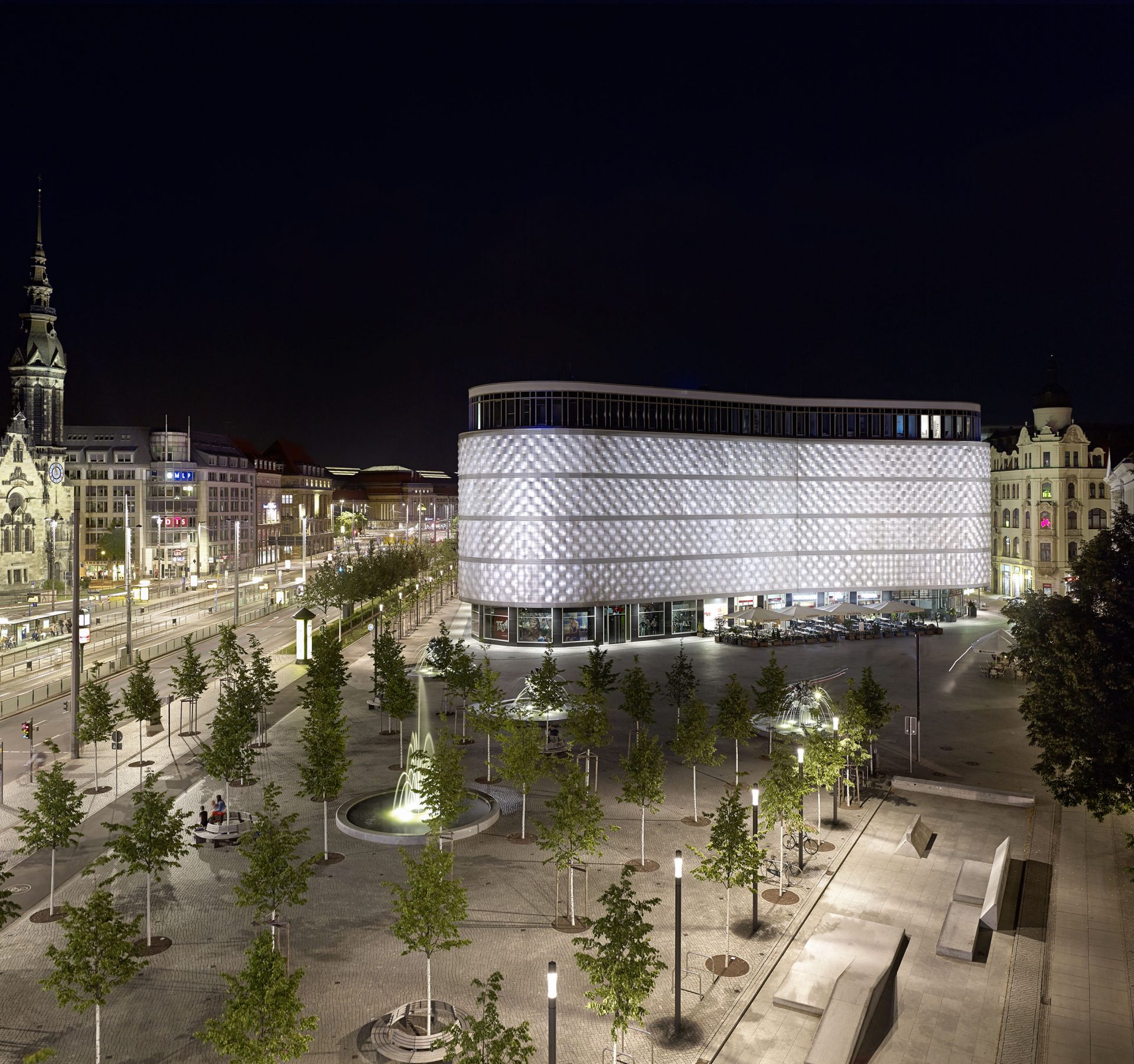 The very ambitious shopping center development project, forming an eastern extension of the Brühl district’s so-called “Blechbüchse”, has caused spirited discussions among the citizens of Leipzig, as well as an attentive intervention in the building process. 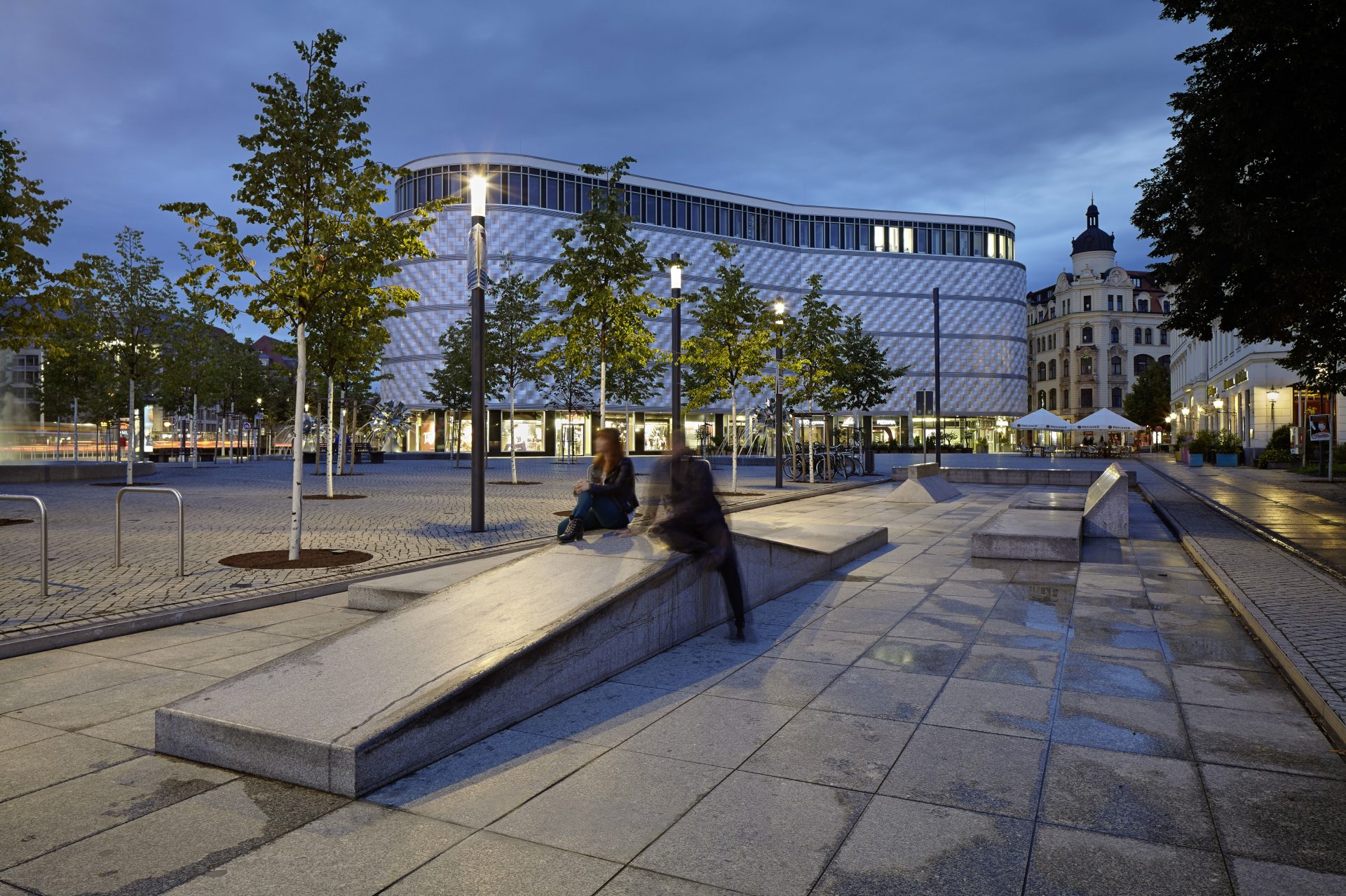 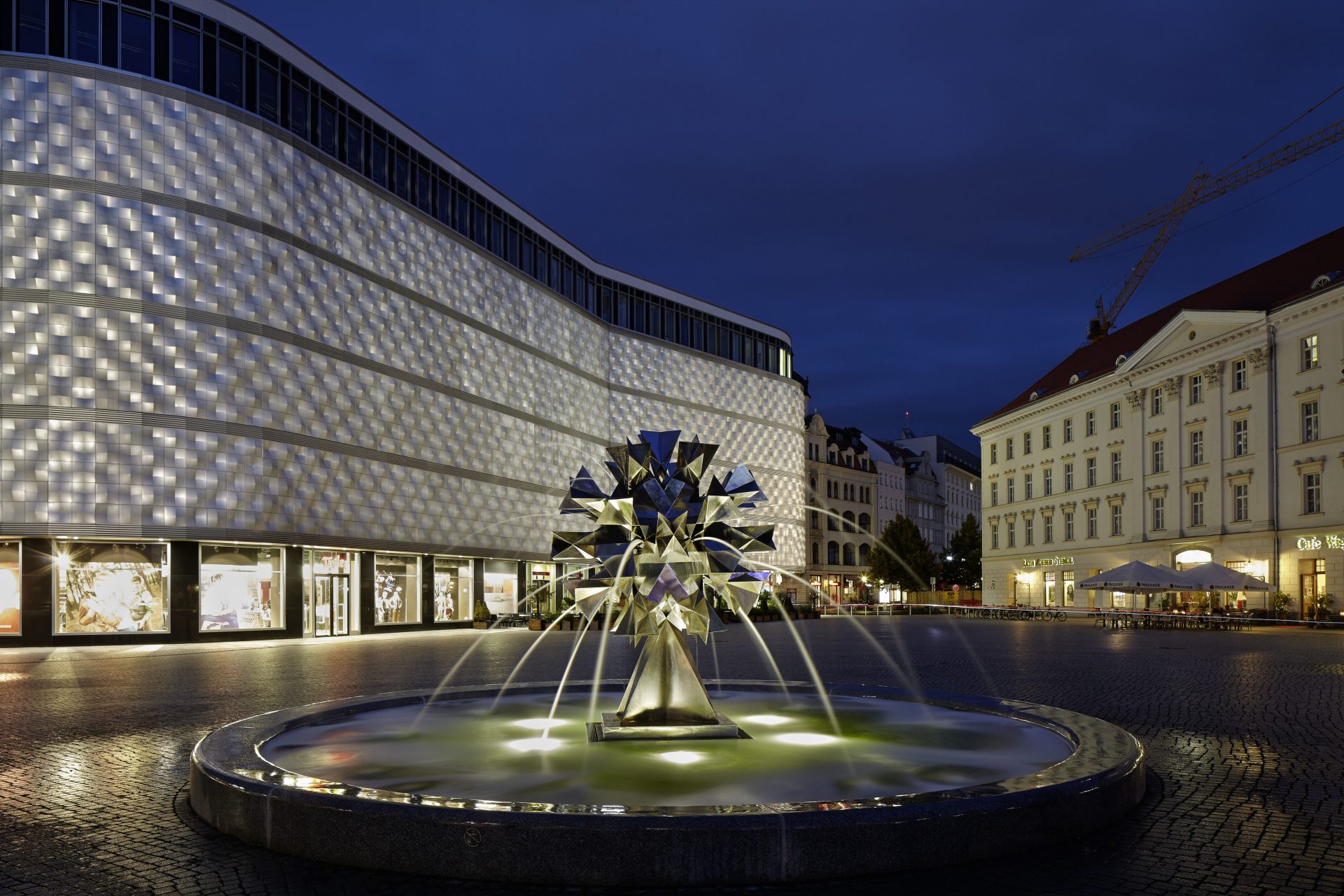 The “Blechbüchse” (tin can) is an iconic building that is firmly rooted in Leipzig’s city self-image. It was designed by the artist and metal designer Harry Müller in 1966. Since 1968, it accommodated the “Konsument am Brühl”, the GDR’s largest shopping venue of its time.

Situated in front of this building, Richard-Wagner-Platz not only has a gateway-like function as an entry to the city, but must also and above all respond to the popularity and level of attention this building receives. Therefore, a top-class competition for the redevelopment of the square was organized among landscape designers and with the involvement of Leipzig’s municipal administration. In the process, requirements were established to generate a prominent location and to make the site available for lively use by the Leipzig population. Hence, the awarded design by Irene Lohaus Peter Carl Landschaftsarchitektur from Hanover, includes a skate park and a charming historic fountain.

For the square itself, a lighting system was selected that is able to respond individually to the various spatial layouts and uses. A modular pole system allows the utilization of luminaires that have the ability to service to the square with different light distributions, ranging from accentuated to uniform. As a result, the skate park could be furnished with relatively high illuminance levels, thus meeting its use’s elevated requirements. Different parts of the square, on the other hand, were supplied with a lower and more atmospheric light level.

The newly developed urban ensemble of square and building blocks enjoys great acceptance among the citizens of Leipzig. From afar, the artfully designed facade from the late 60s presents itself as a carefully choreographed eye-catcher – upon approaching the plaza, however, the observer’s perception shifts towards the horizontal plaza and makes one curious to explore the attractions and installations on site. Internationally, the realized project has aroused a great deal of attention and has been recognized with the city.people.light Award 2014 by an experienced jury.

The development of a consistent illumination concept was challenging. On one hand was the prominent artistic envelope of the existing building complex, and on the other hand, the contemporary shopping center facade design by Grüntuch Ernst Architects, quoting elements from Leipzig’s architectural history. Each were to be given special attention without detracting from the square. Correspondingly, the striking and light-responsive facade of the front building has been illuminated with a novel system that uses gobos in a projection technique that precisely lights the building to the edges of its elevation. The goal was to apply a gentle, almost imperceptible light layer; not for the building to appear as if it is flood-lit, but rather to give the impression of it radiating from within. The square in front of the building thus has an appropriate setting in its urban context.