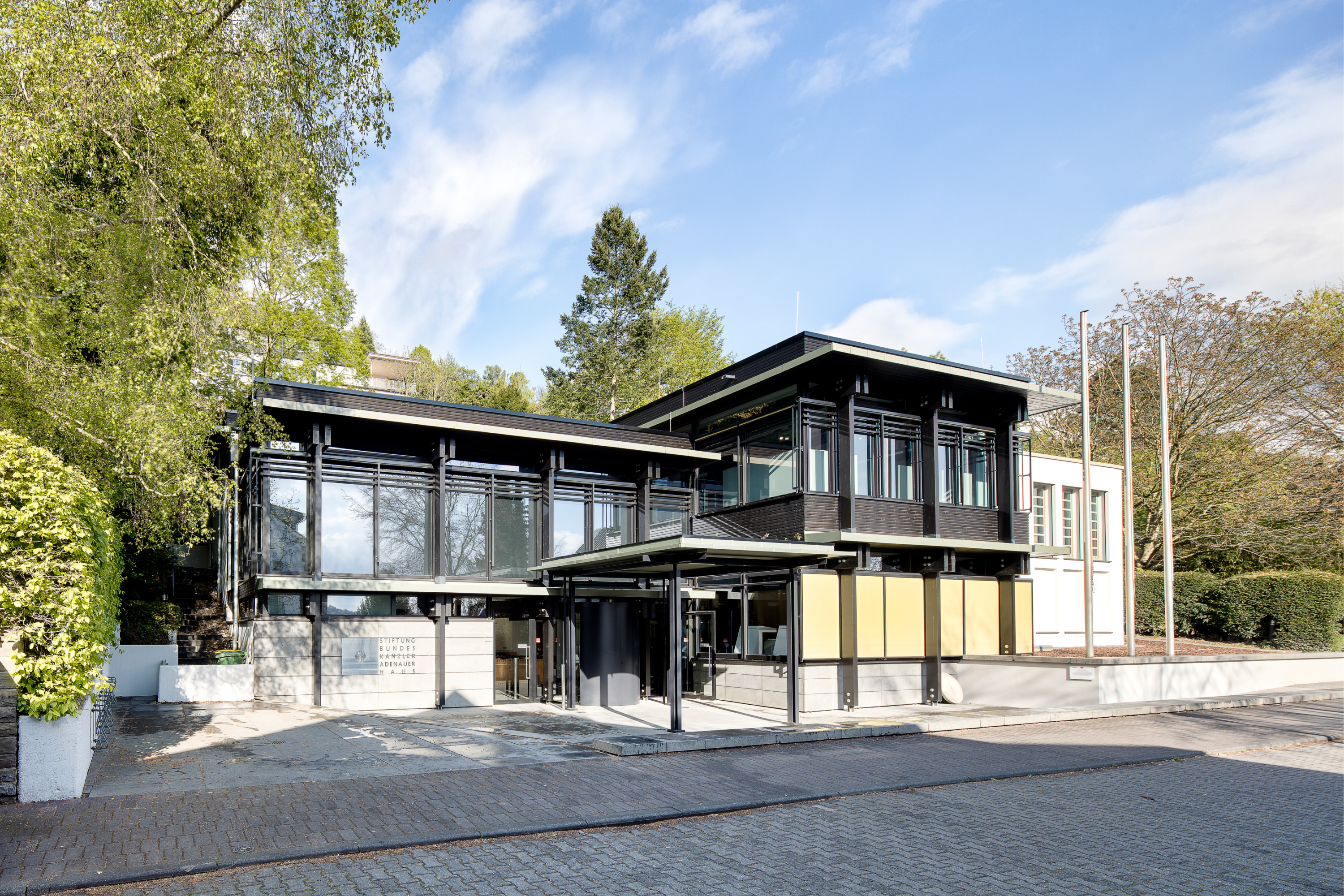 In Rhoendorf, just a few kilometers south of the former capital Bonn, Konrad Adenauer’s residential house is located with a view to the Rhine. The non-partisan foundation “Stiftung Bundeskanzler-Adenauer-Haus” is dedicated to the legacy of the first Chancellor of the Federal Republic of Germany and his former home. This foundation also manages the museum building located on a slope just below the residence, which has made the person and the works of Adenauer accessible to the public since 1975. 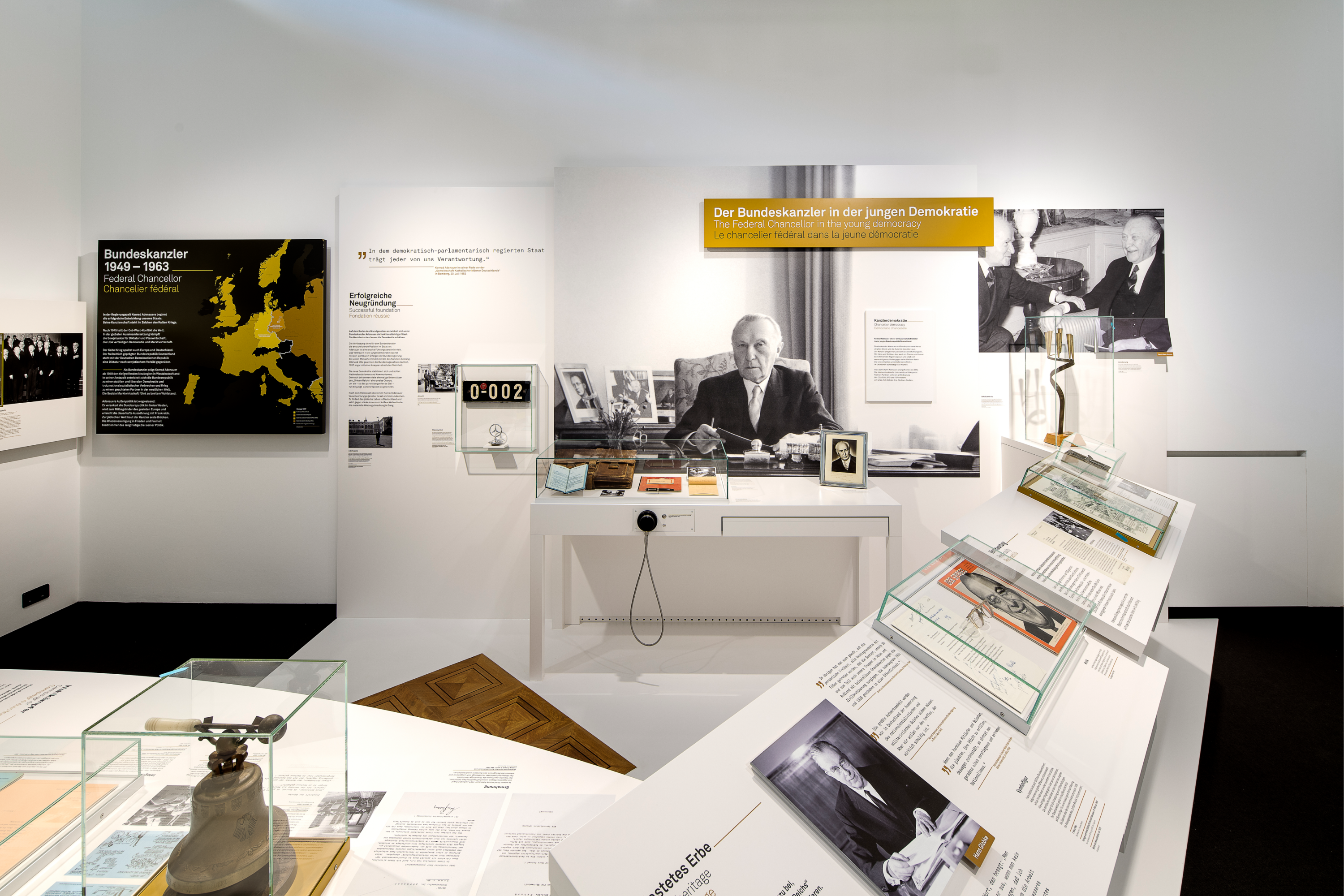 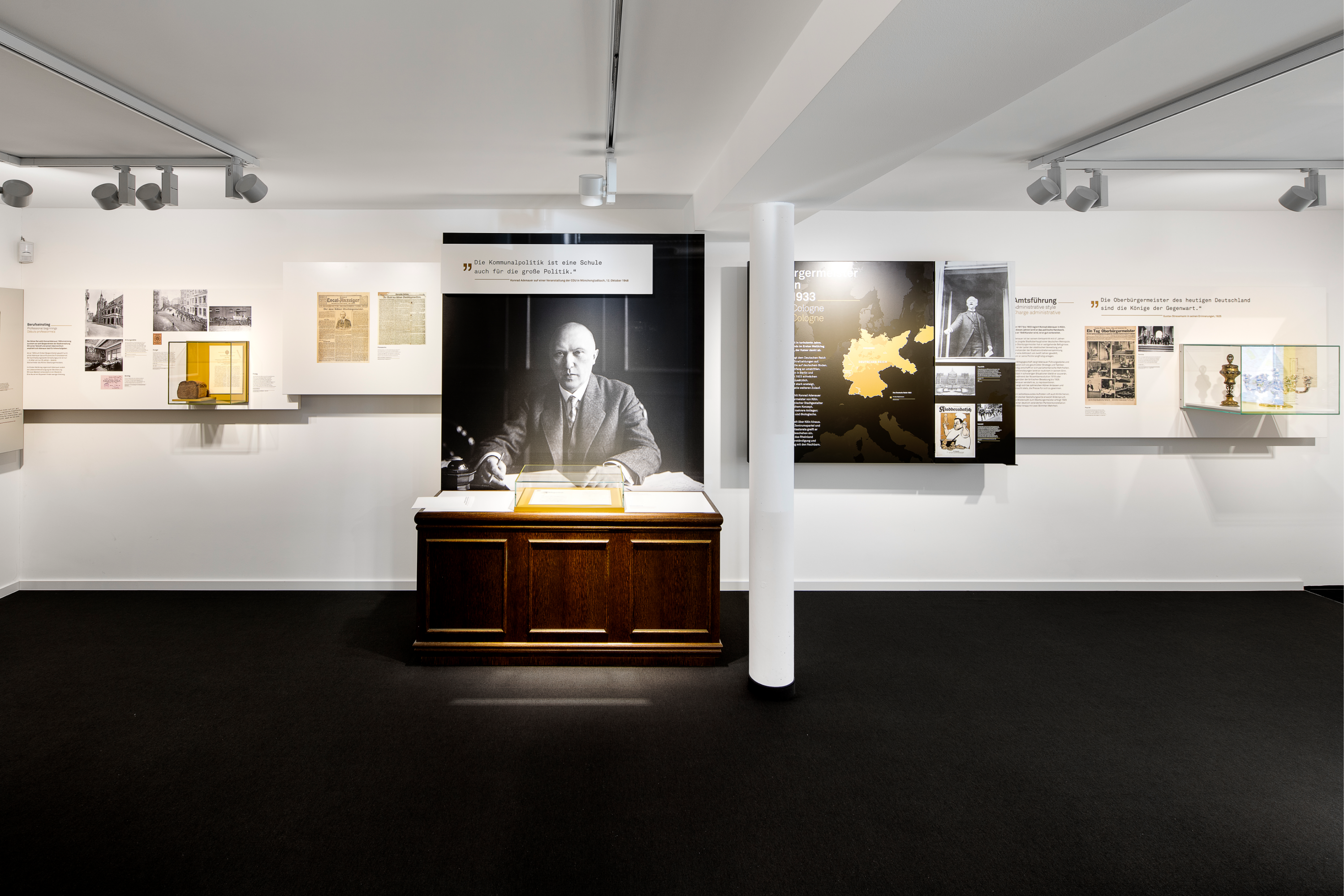 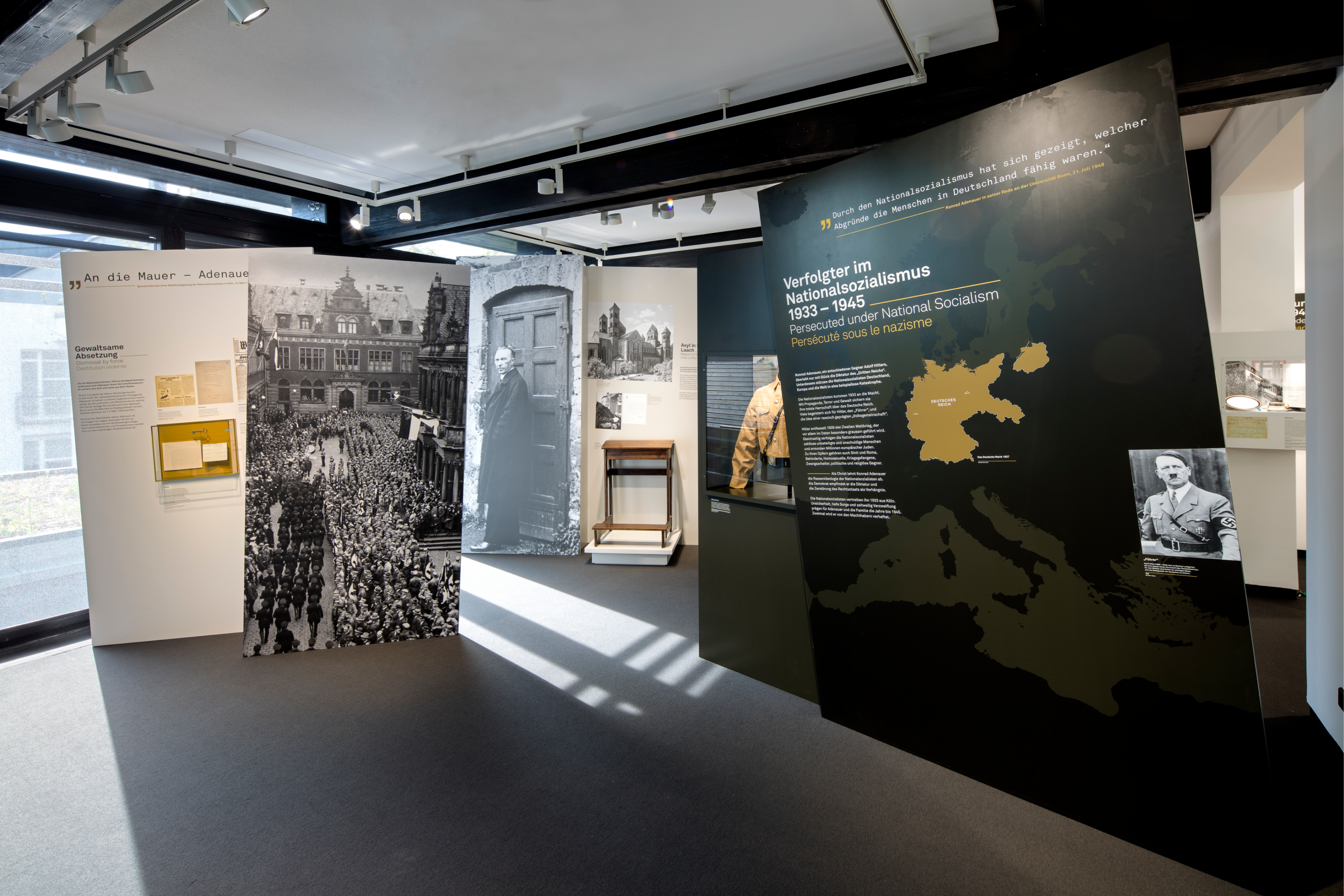 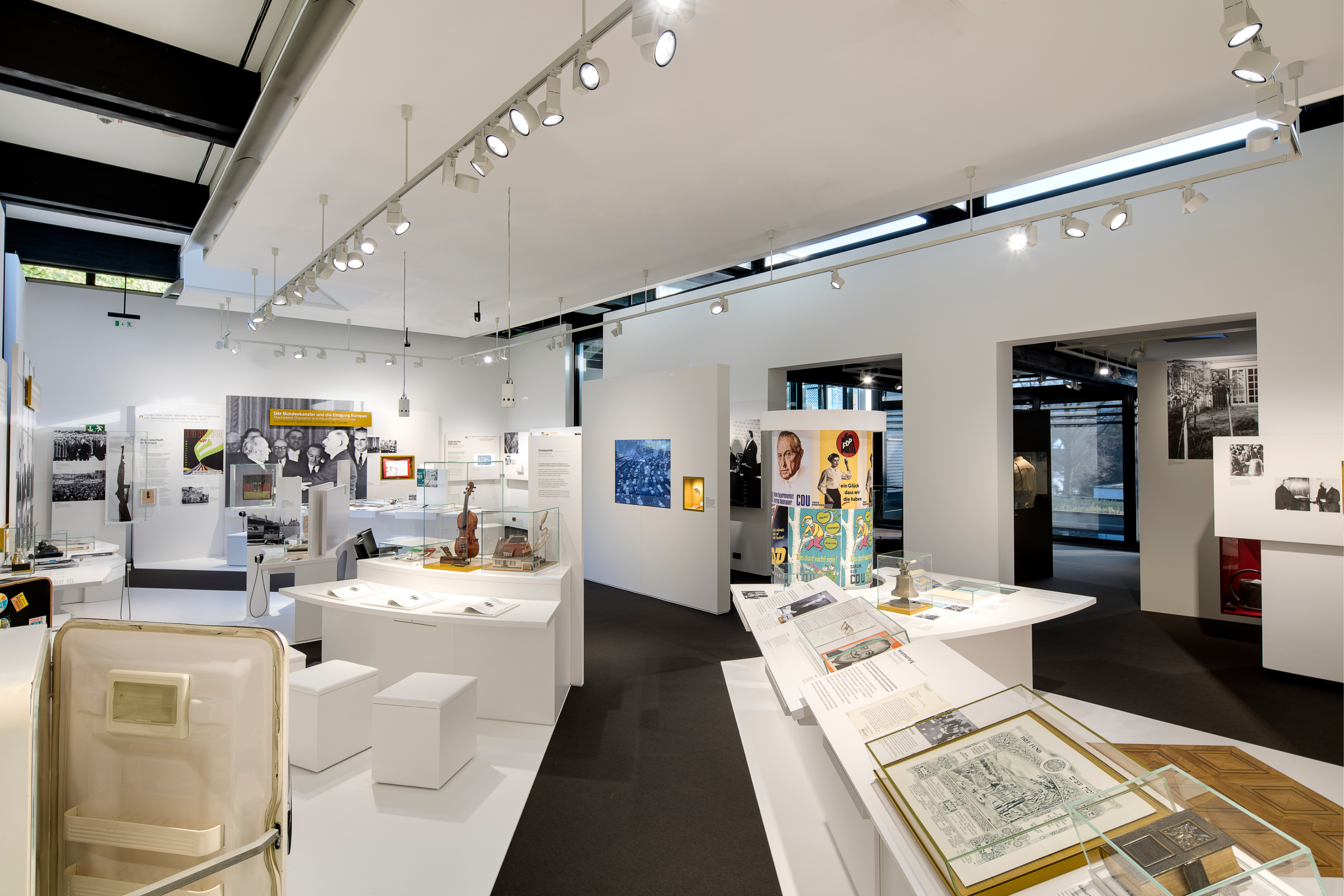 In preparation of the 50th anniversary of Adenauer’s death, the museum building was renovated and the exhibition was completely redesigned by Atelier Brückner.

A complex scenography of exhibition walls and furniture, show cases and media stations has been implemented in the daylight-flooded museum structure. Adenauer’s history from the German Empire to the end of the 1960s is documented in a condensed exhibition, extending across three floors and six subject areas.

In this ensemble, the lighting basically works with classic frames of tracks, which were cautiously integrated into the existing structure. Since the scenography functions rather independently of the existing ceiling structures, the tracks translate between these two spatial structures.

The lighting concept fulfills three tasks: the illumination of the exhibition areas and the traffic areas, the visual conveyance of the scenography and the balancing of artificial light and daylight.

By specifically illuminating just the exhibition’s surfaces, the scenographic fixtures naturally stand out and detach from the existing structure’s background. The lighting works with just one family of adjustable spotlights, which are equipped with different optics and illuminate the heterogeneous displays and exhibits in a very differentiated way while purposefully playing with the shadows of the polygonal fixtures.

In many glass cabinets, a concealed system of adjustable miniature luminaires has been integrated so that special exhibits are highlighted very precisely.

The emphasis through artificial light in the daylight flooded rooms occurs through an individual adjustment of each spotlight ensuring that the exhibition appears differently according to the time of day, yet remains stringently illuminated at all times.

The lighting concept is implemented solely with LEDs and serves a contemporary and condensed scenography with differentiated yet few elements, so that the reopened museum is able illuminate Konrad Adenauer’s life and work for the next generations.

The new permanent exhibition was opened on the 50th anniversary of Konrad Adenauer’s death in the presence of Cardinal Woelki and the Head of the Office of the Federal Chancellery Peter Altmaier.