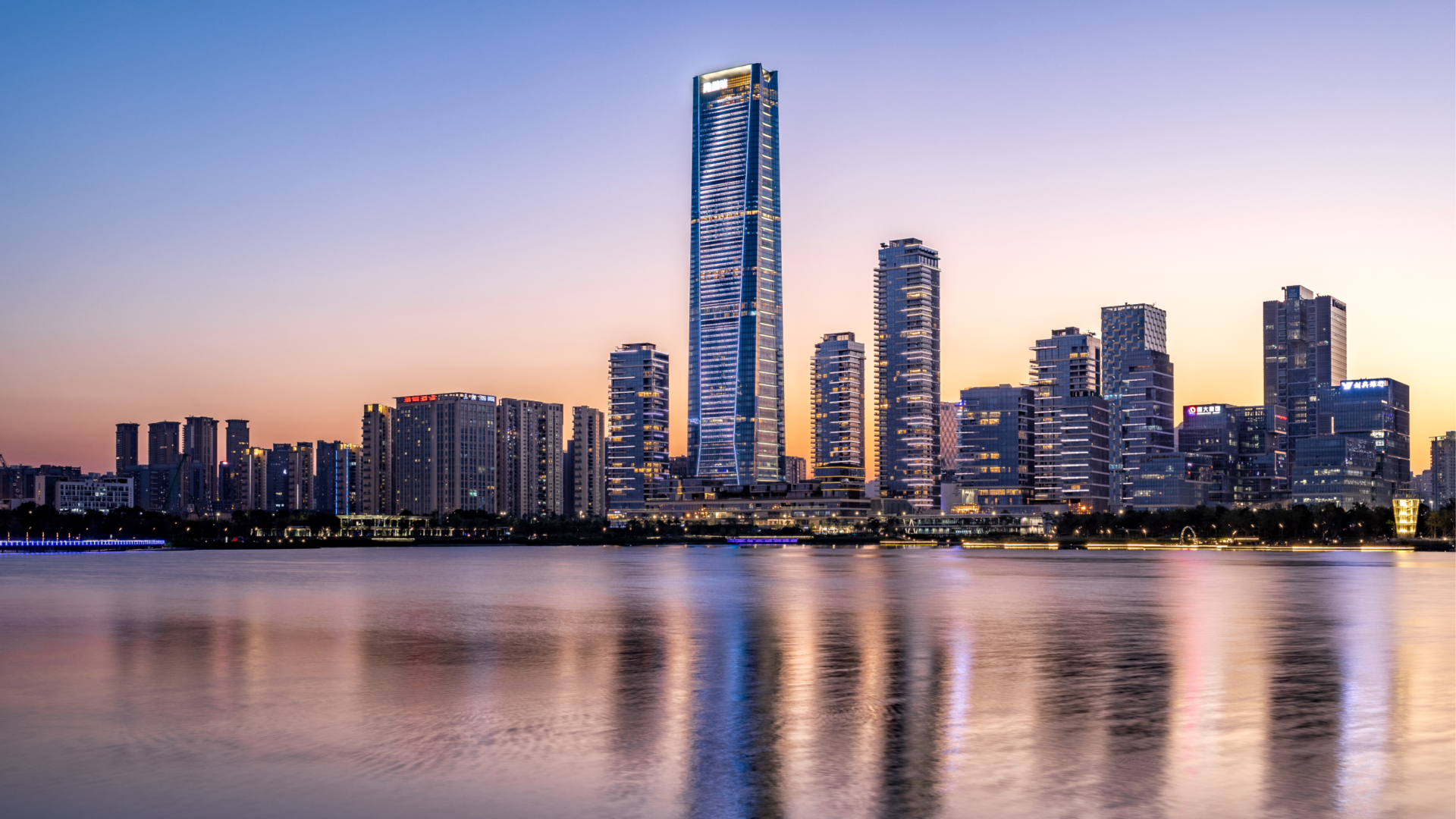 A Rhythm of Light on the Banks of Shenzhen Bay

A vibrant mixed-use development, One Shenzhen Bay serves as an interface between the bustling city and the adjacent tranquil Shenzhen Bay. 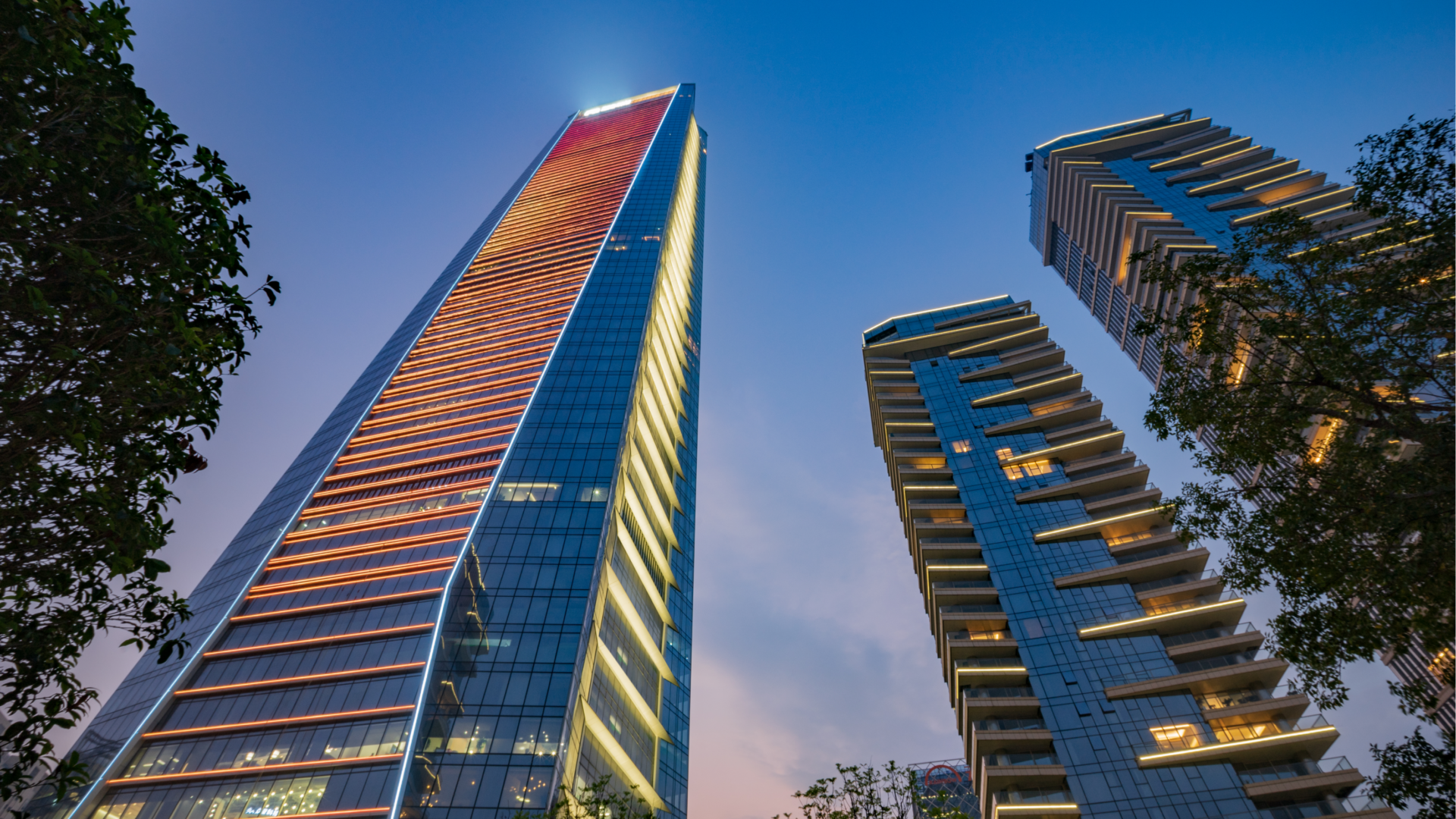 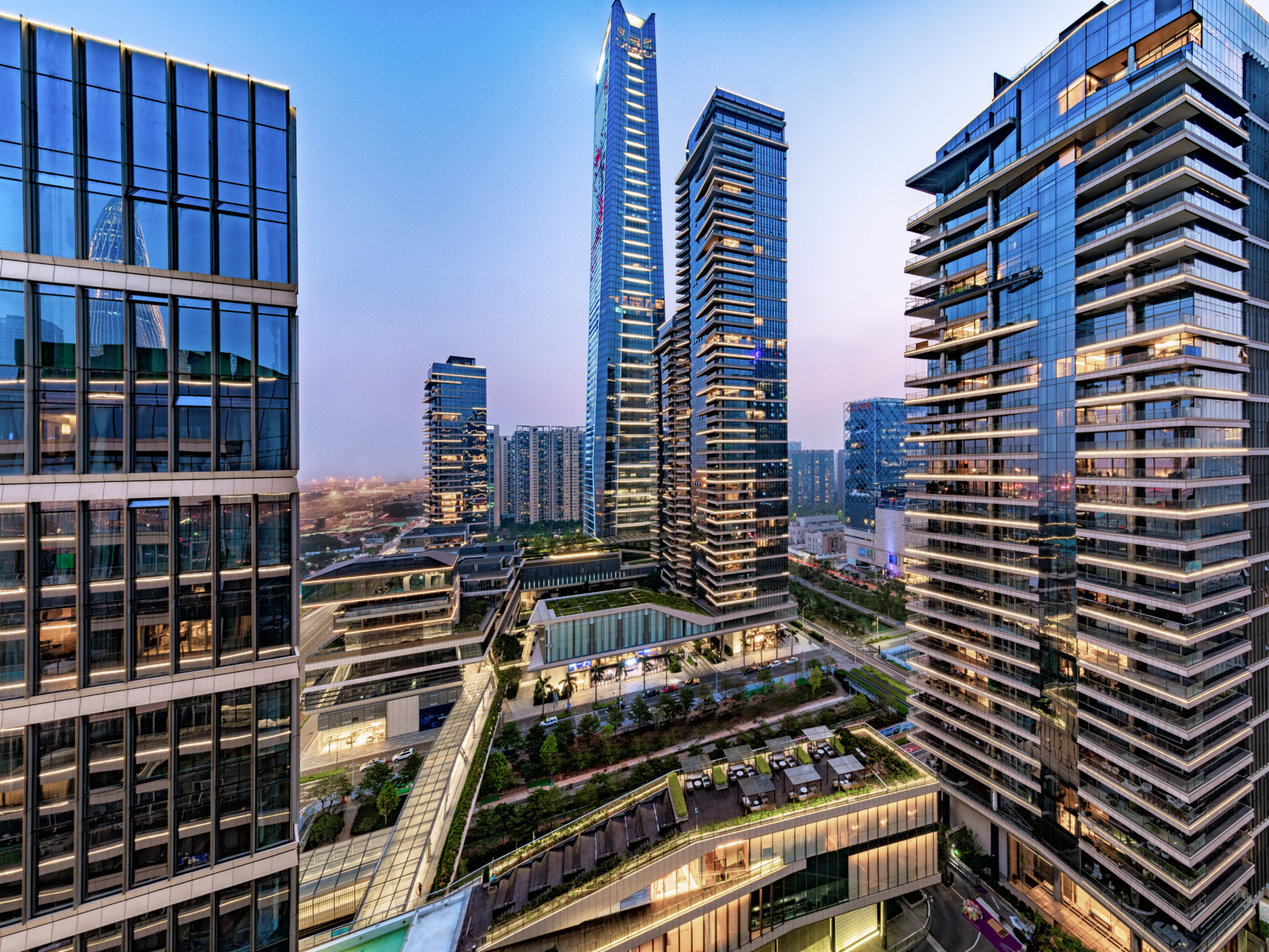 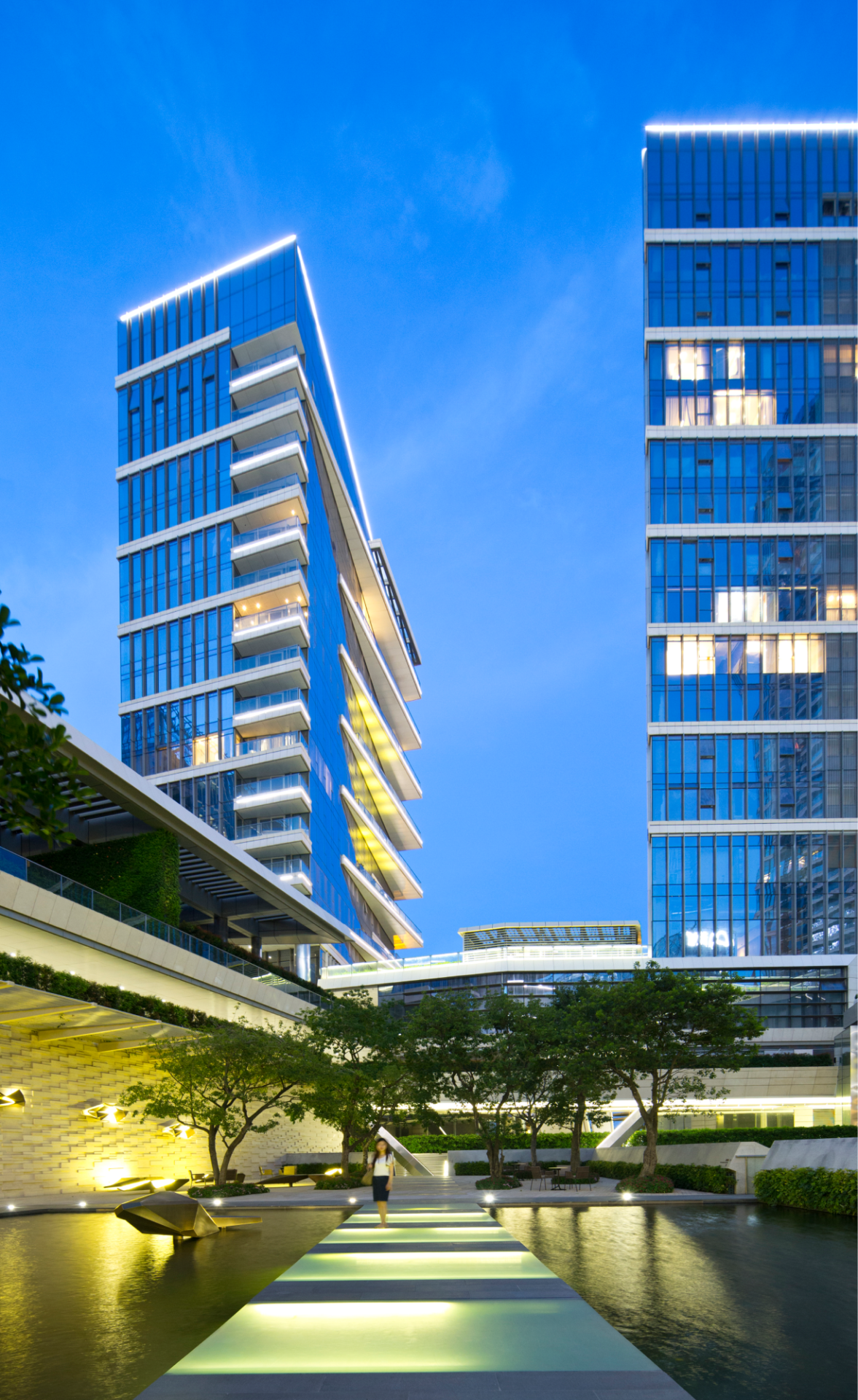 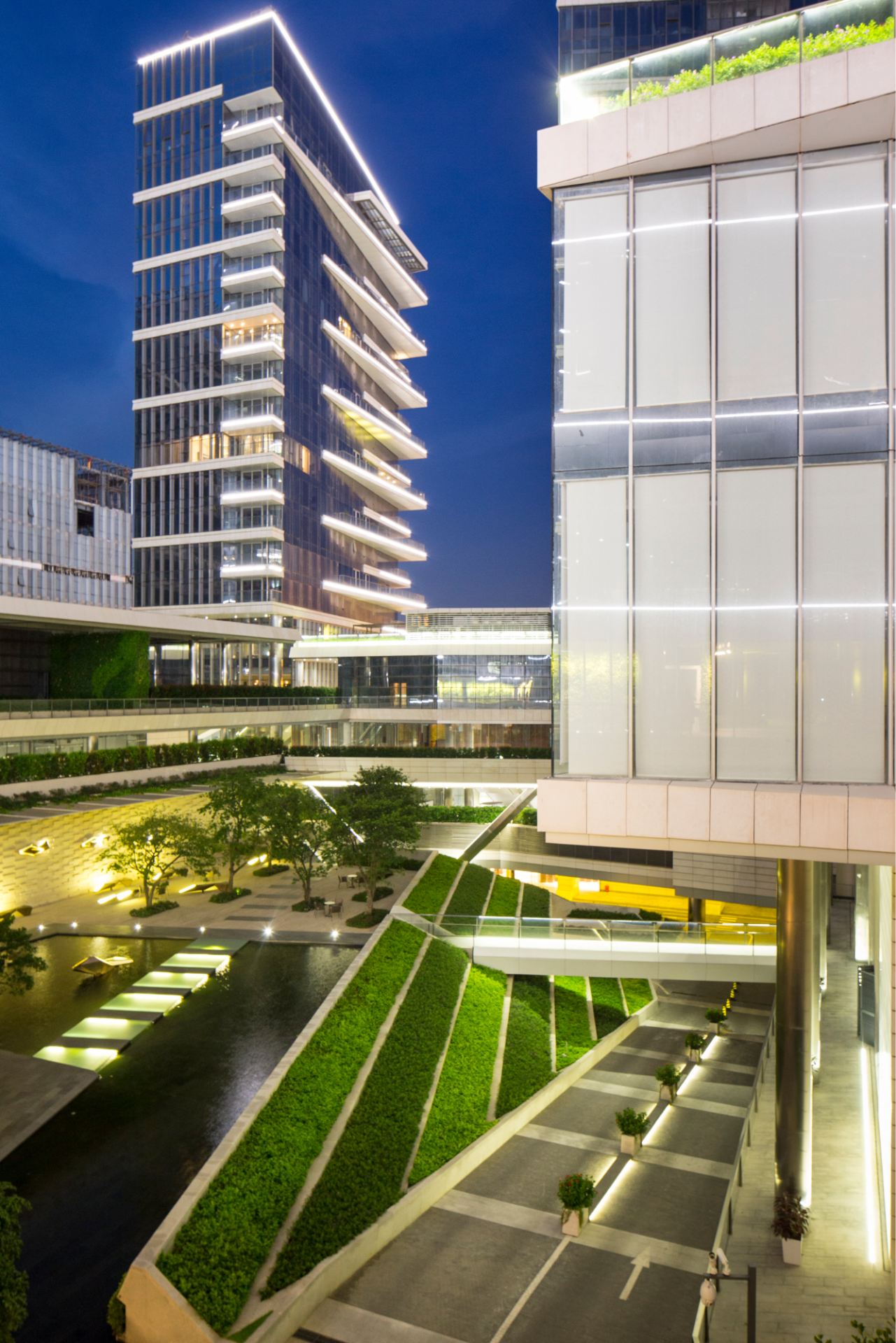 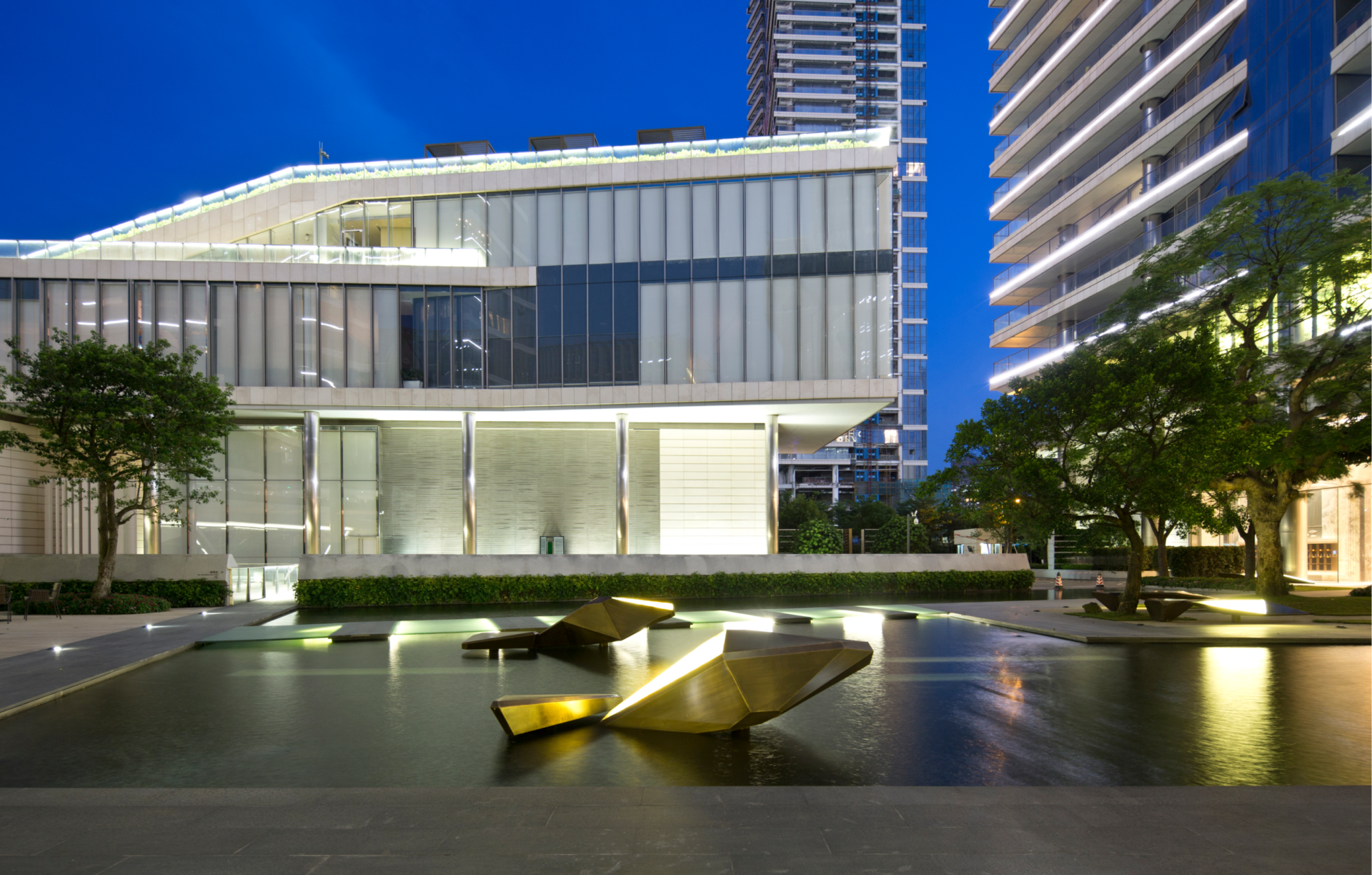 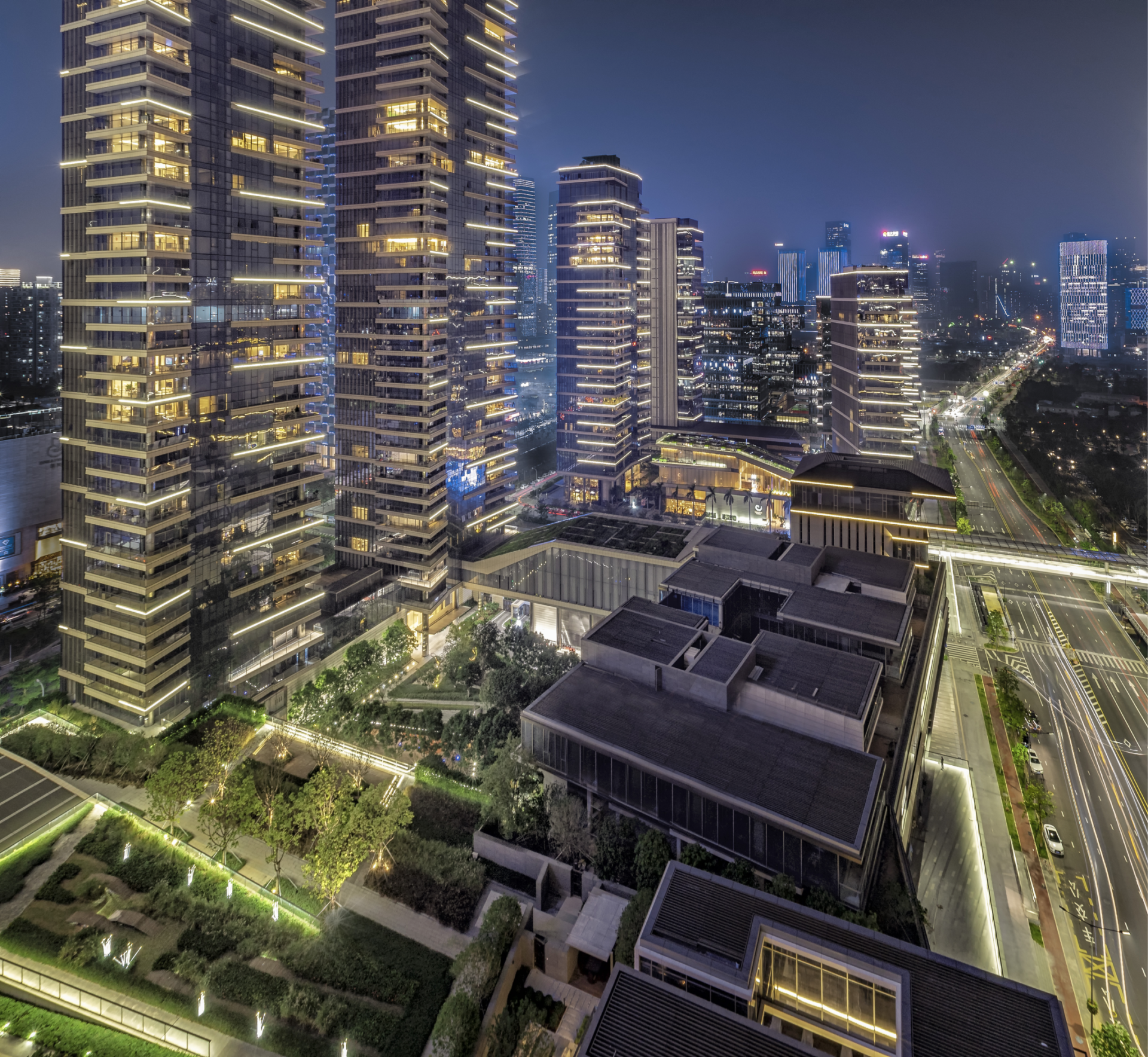 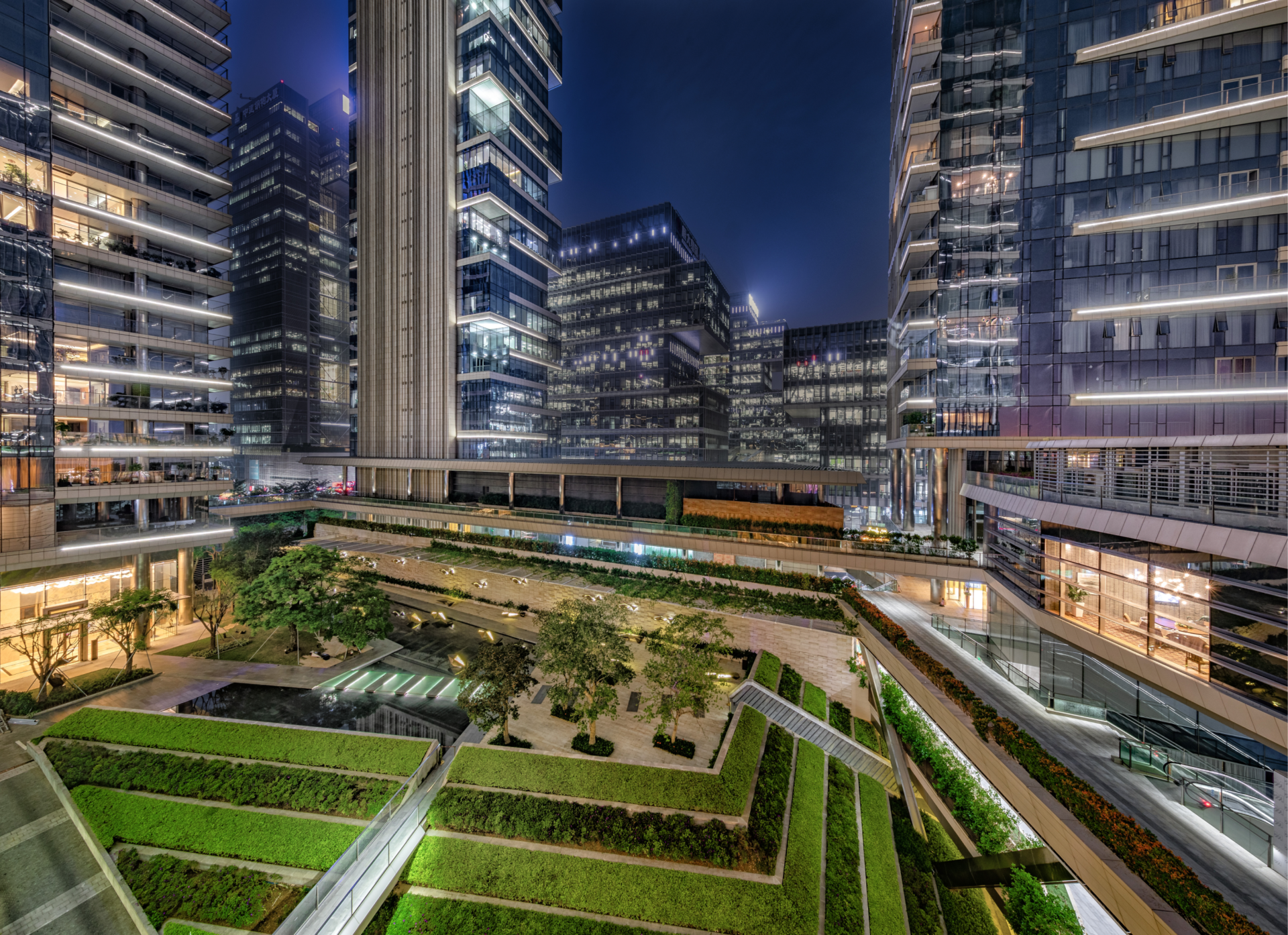 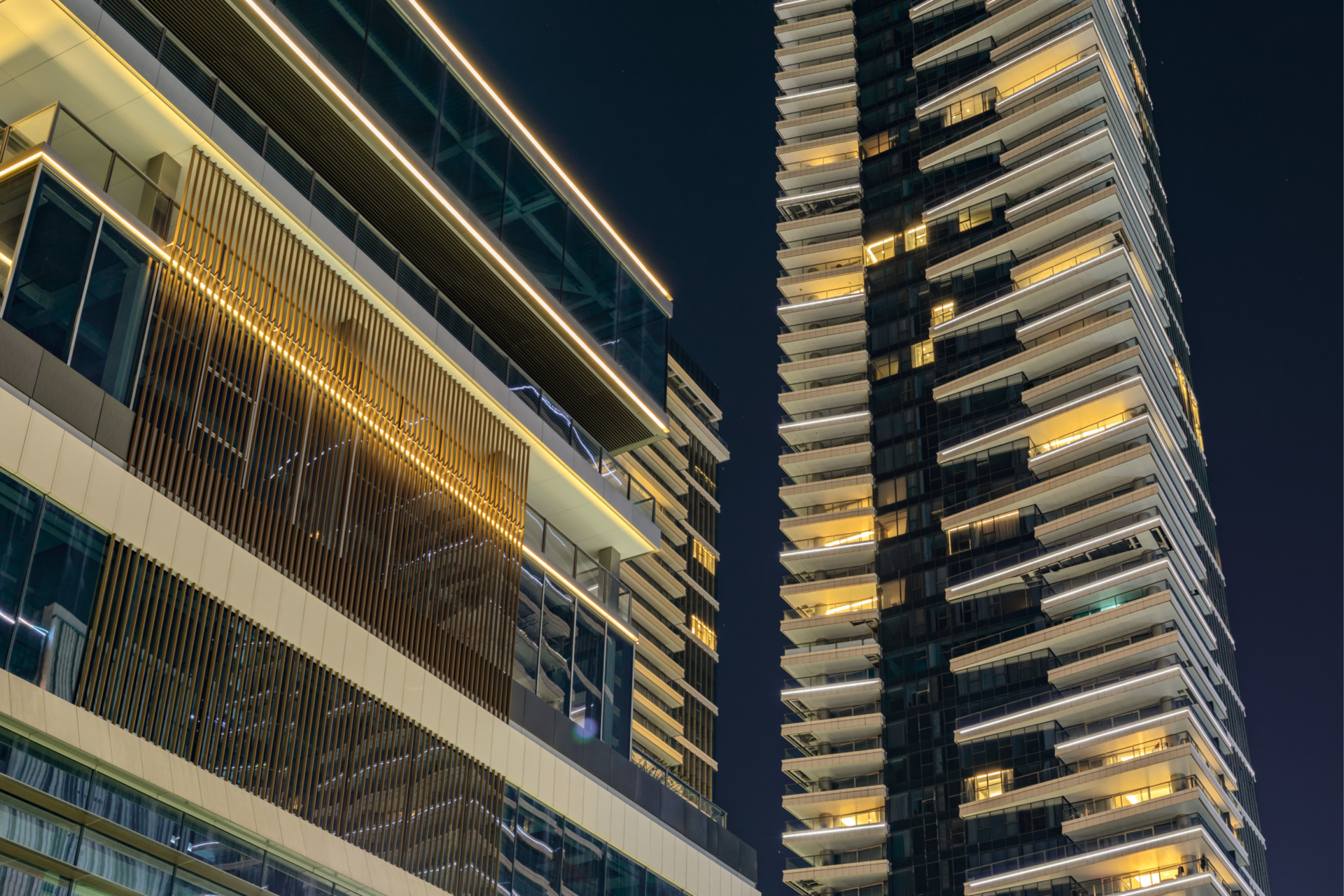 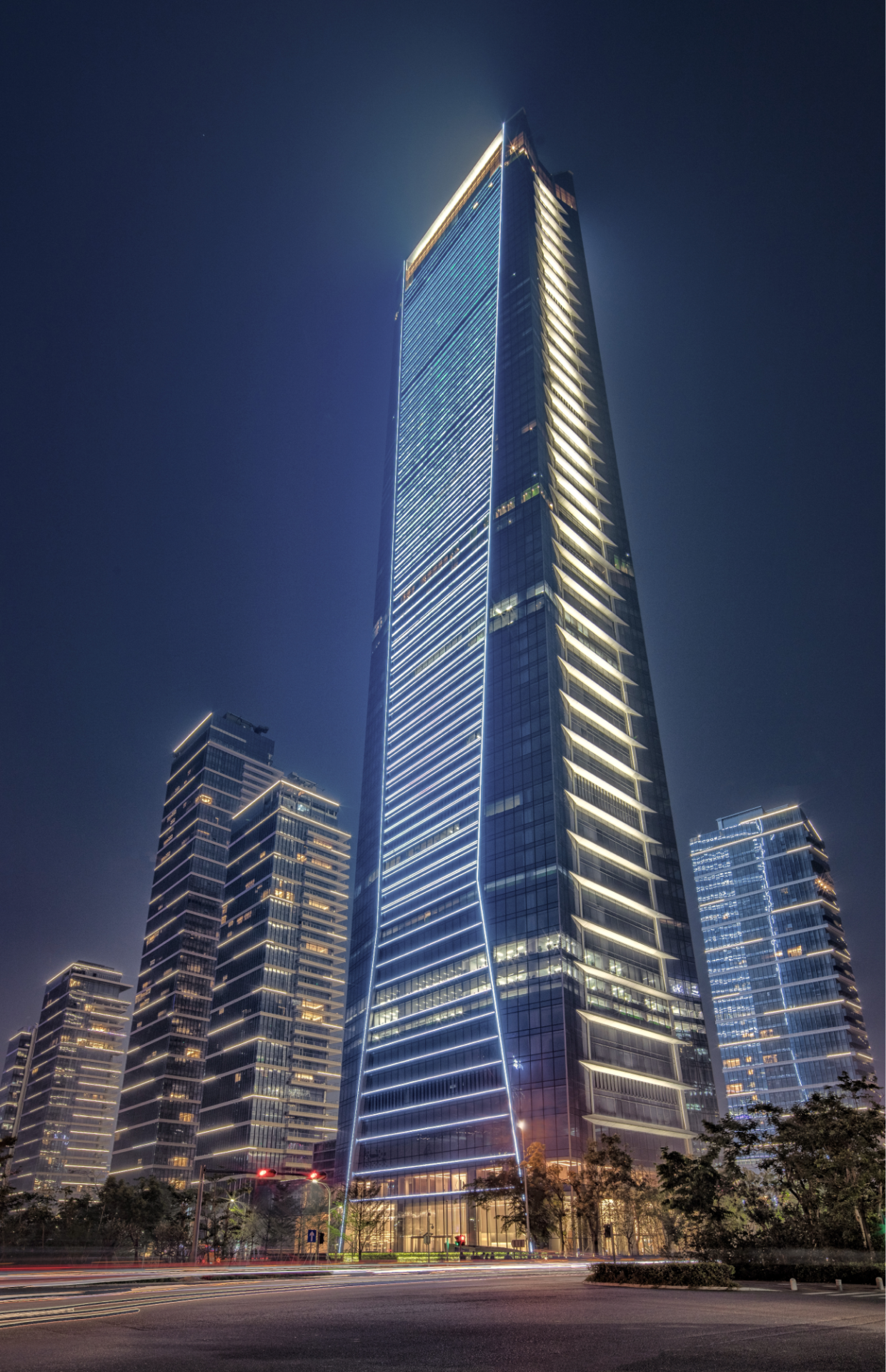 The architect’s careful study of view corridors and sight lines in planning the location and orientation of the towers did not go unnoticed. Detailed attention was given by the lighting designers to ensure the exterior lighting products do not disturb residents, neither by location nor intensity.

Direct linear LED profiles were planned in the residential towers’ horizontal stone spandrel reveals, effectively concealing the lighting products during the day. Through coordination with the architect, the stone panels were angled to provide sufficient cut-off angles to shield the luminous lines from the residents view, regardless of their position. In planning the lighting for multiple adjacent towers, consideration was also given to reduce the LED profiles on the opposing residential facades. Through various mockups, a simple installation detail was developed which ensured the design intent was installed consistently and correctly throughout the project.

On the office towers, an indirect lighting approach was taken. Horizontal graze lights are located behind shields to hide the LEDs from view from both interior and exterior views. These uplights graze the underside of architectural elements which define the facade. For the feature tower, a shielded mounting detail was developed in collaboration with the architect and façade consultant, to frame the light beam at a specific angle; thereby illuminating the exterior architecture without trespassing into the interior tenant spaces.

For this market, it was a radical choice by the lighting designer to elect to light only a select number of architectural elements. A consistent approach at a reduced quantity proved to create a powerful presence. The horizontal light lines construct a cohesive identity by revealing each architectural mass without overpowering the facades themselves.

While the low-level landscape lighting remains white, all elevated facade fixtures incorporate dynamic RGB+W LEDs which are connected to a sophisticated lighting show controller. For holidays and special events, the client is able to recall rhythmic and calm lighting displays which is synchronized across the lighting elements of all facades.

Together, the horizontal light lines across the various towers and landscape features form a rhythmic ensemble of light which remains unobtrusive at close proximities, yet strongly symbolic when viewed at a distance. At a broader scale, the media facade and dynamic lighting components provide One Shenzhen Bay the ability to relate to the active atmosphere of the city, while the purposefully gentle content is designed to reinforce its identity on the banks of Shenzhen Bay.