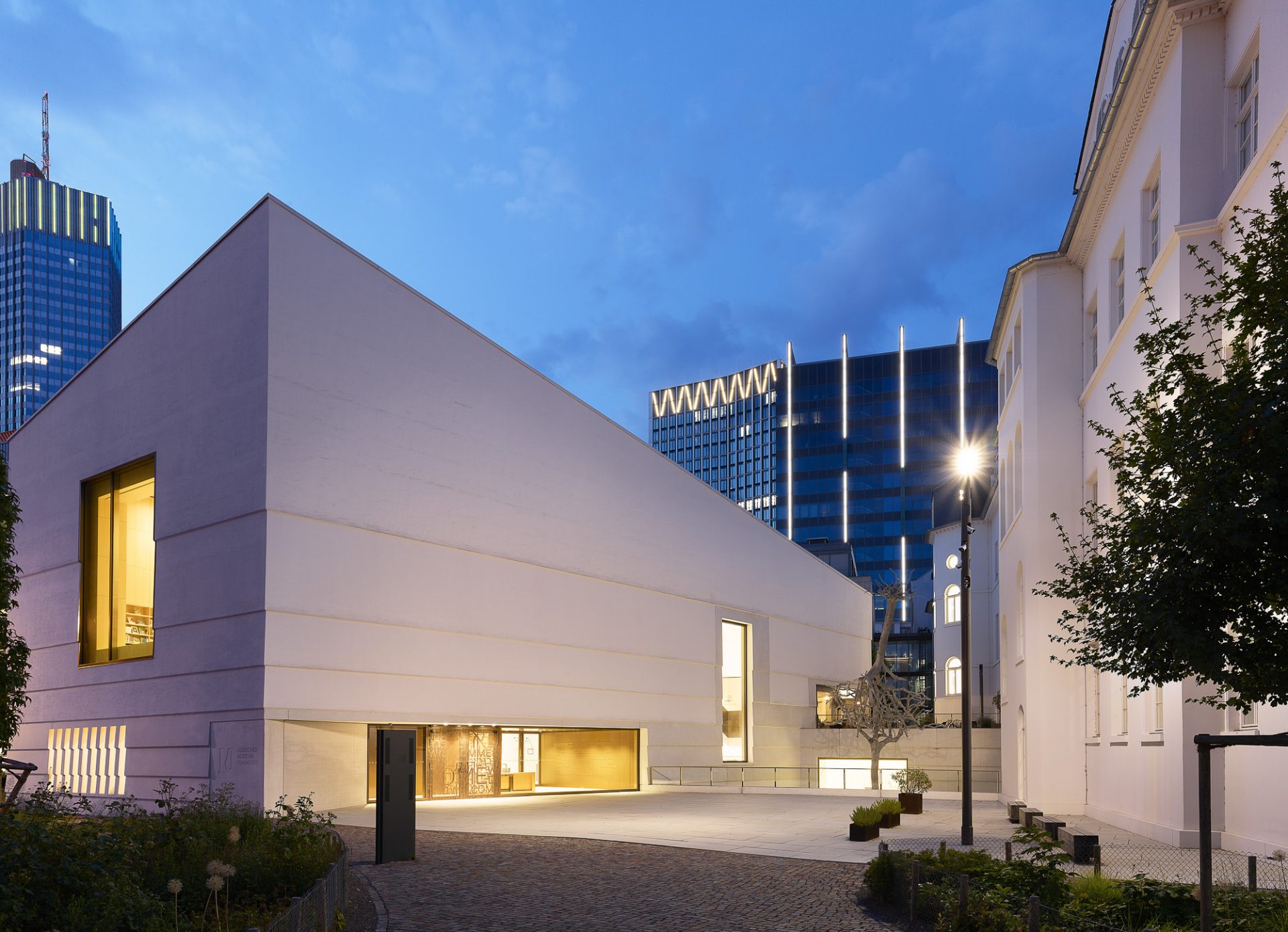 In the former gardens of the Rothschild Palais, a listed building, a modern extension has been built which provides over 600 square meters of space for temporary exhibitions in the generous basement. The design of the new building by Staab Architekten includes a multifunctional lecture hall and reading room with a public library, as well as a kosher deli, a museum store and the new main entrance with a connected foyer, which is used for a wide variety of events. The historic home of the Rothschild family was also stripped and renovated to restore it to its original historic condition. The new permanent exhibition, which is spread over three floors on approx. 1,500 square meters, tells the story of the Jews in Frankfurt from the Enlightenment and Emancipation around 1800, to the present. The office of Licht Kunst Licht AG carried out the daylight and artificial lighting design of the new building and the permanent exhibition. 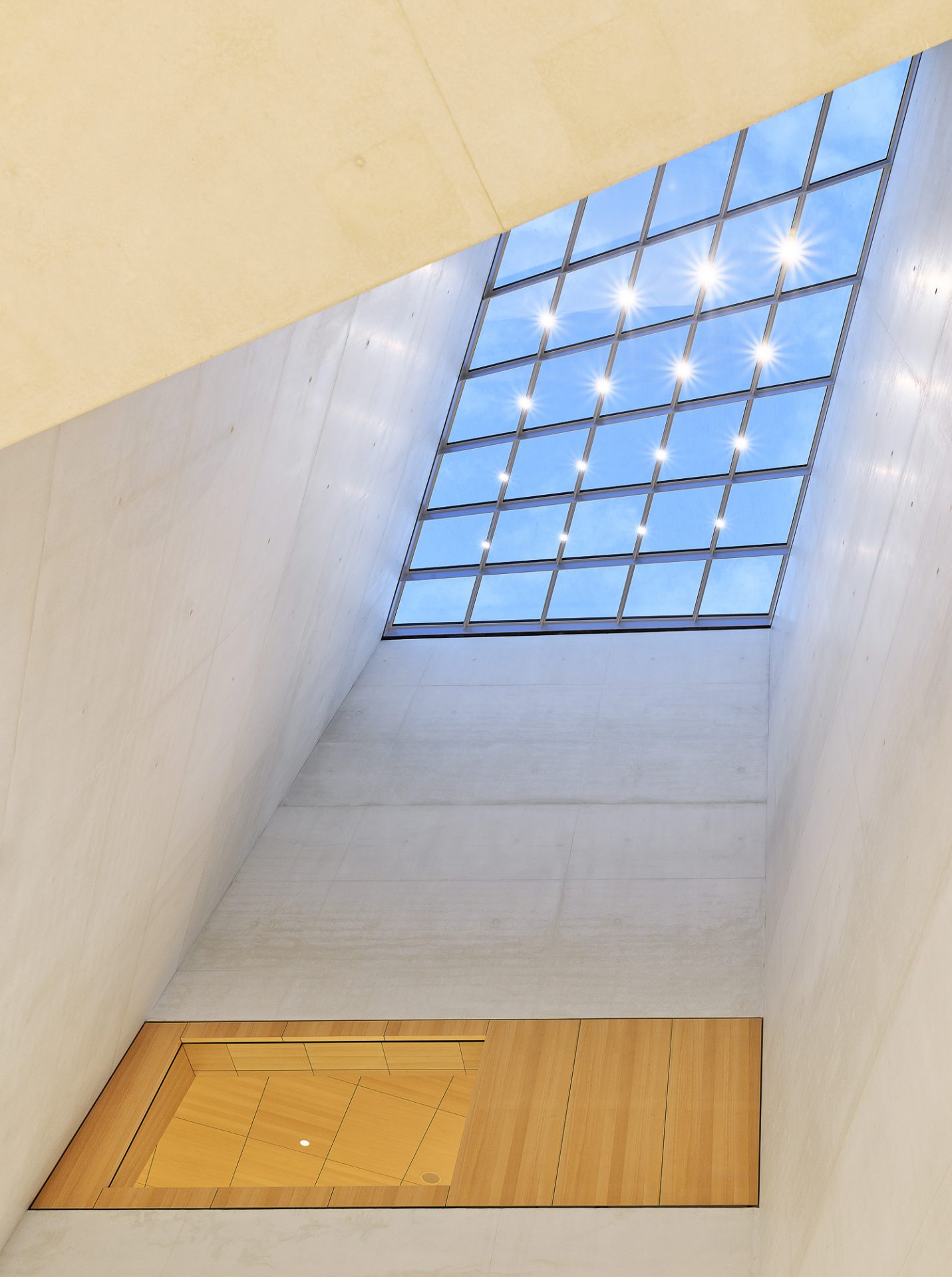 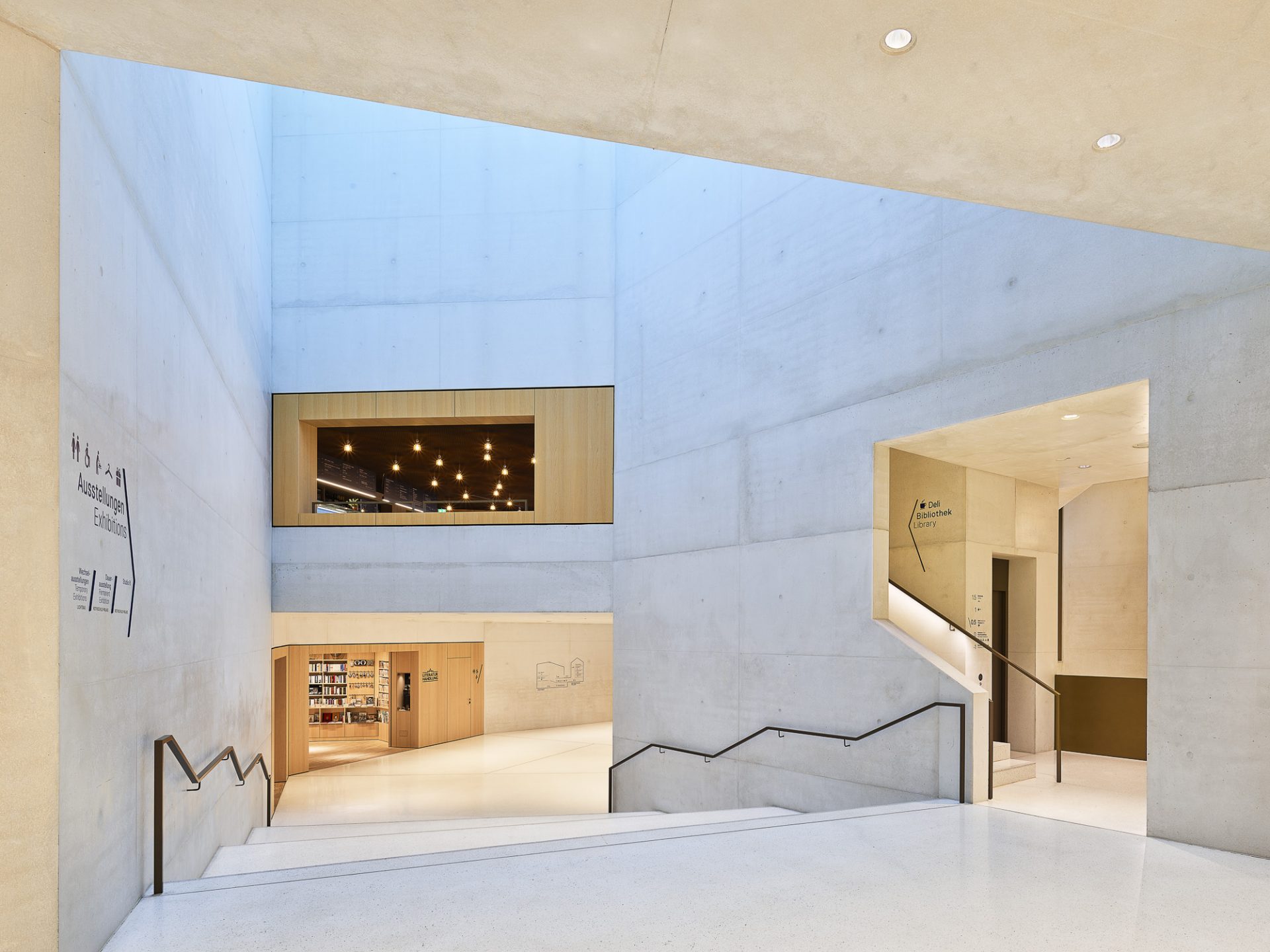 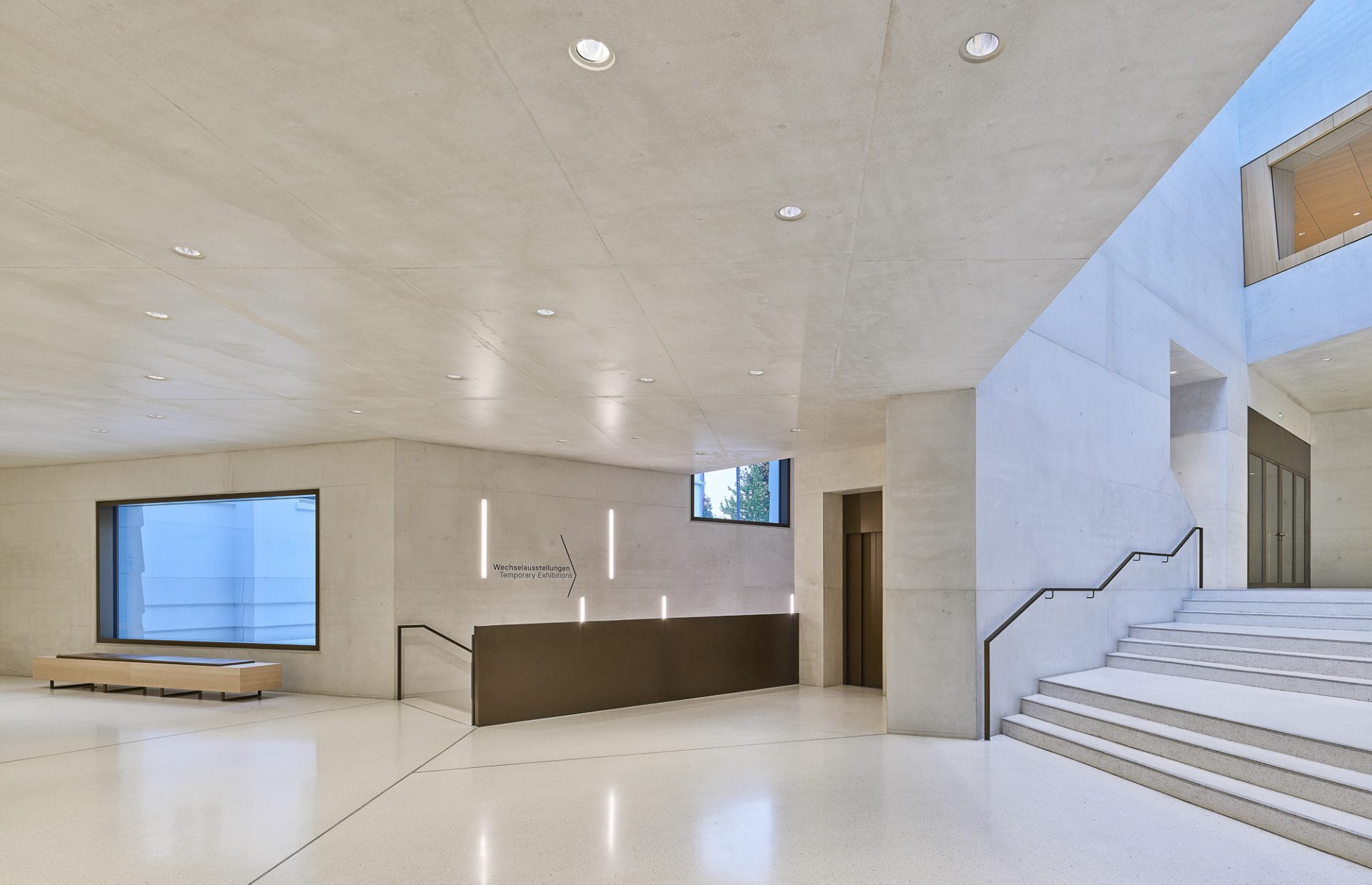 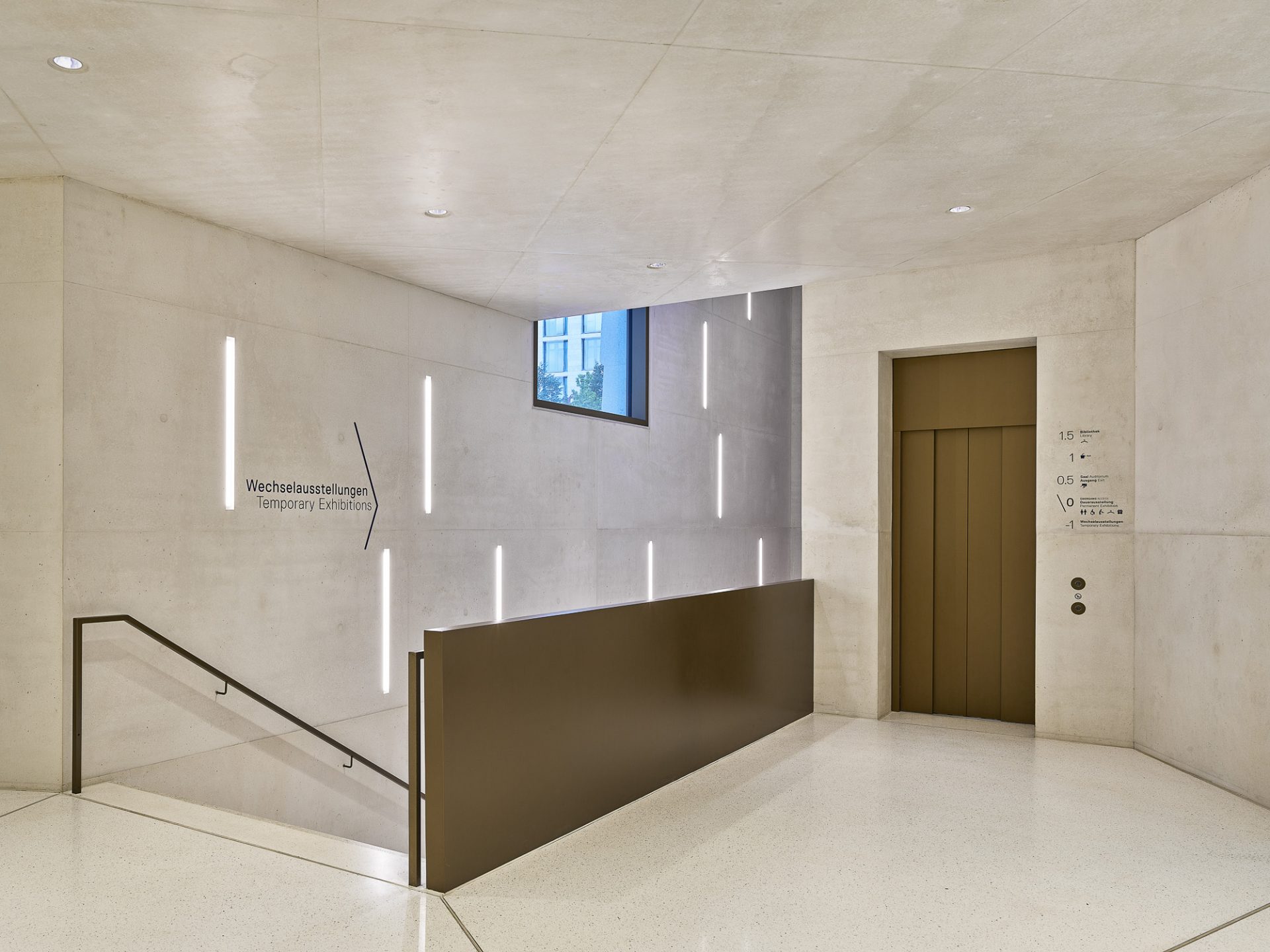 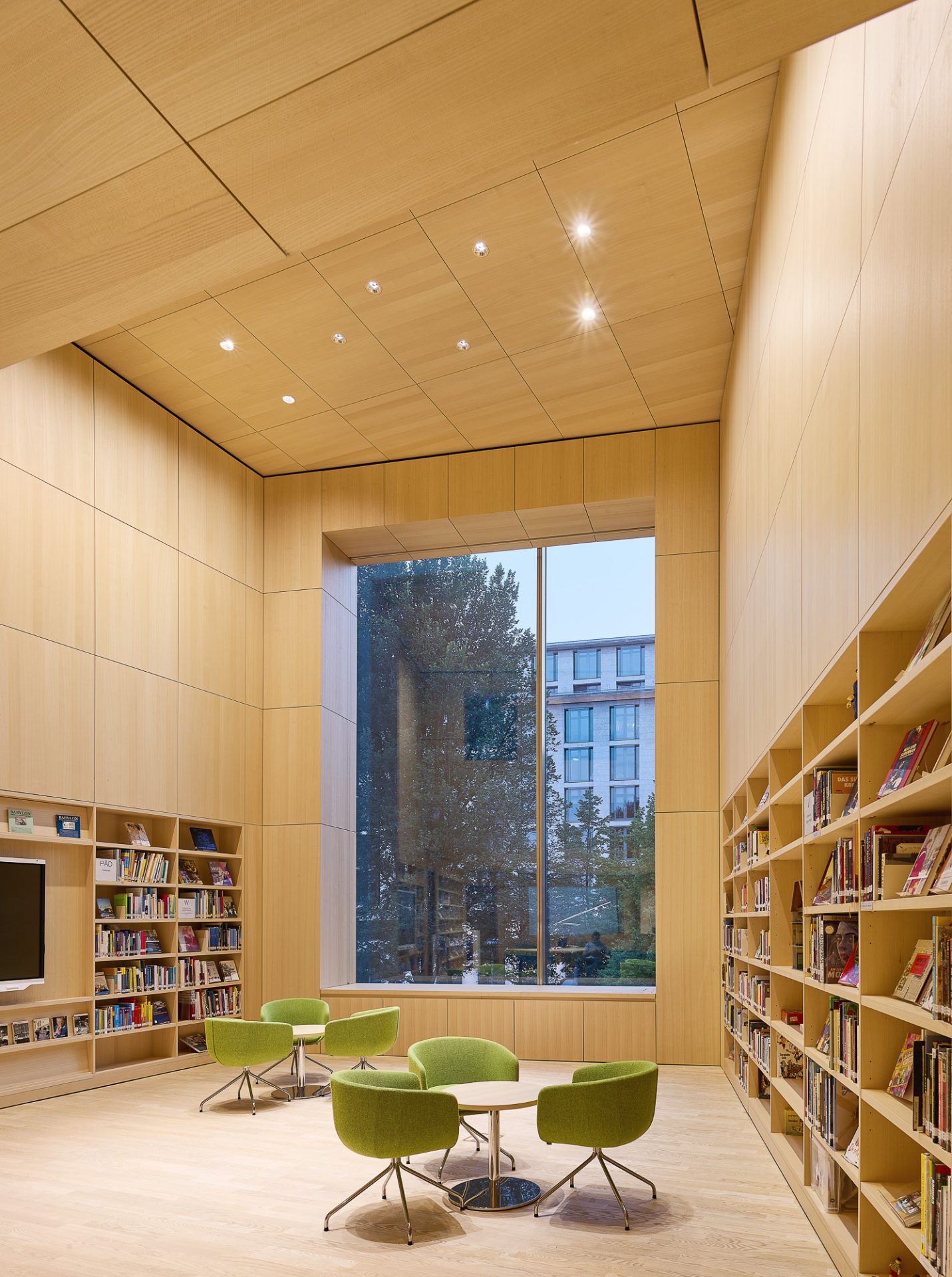 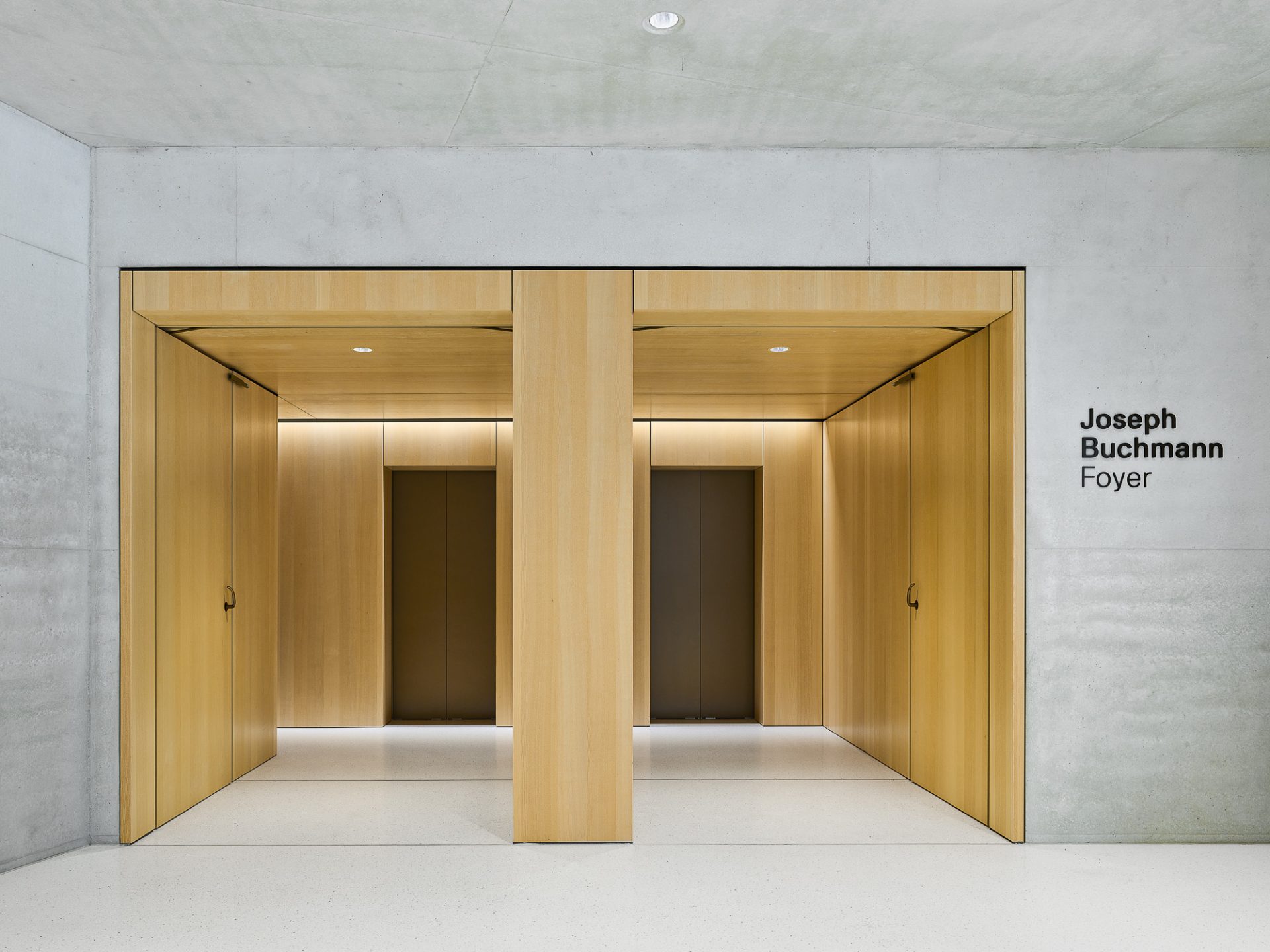 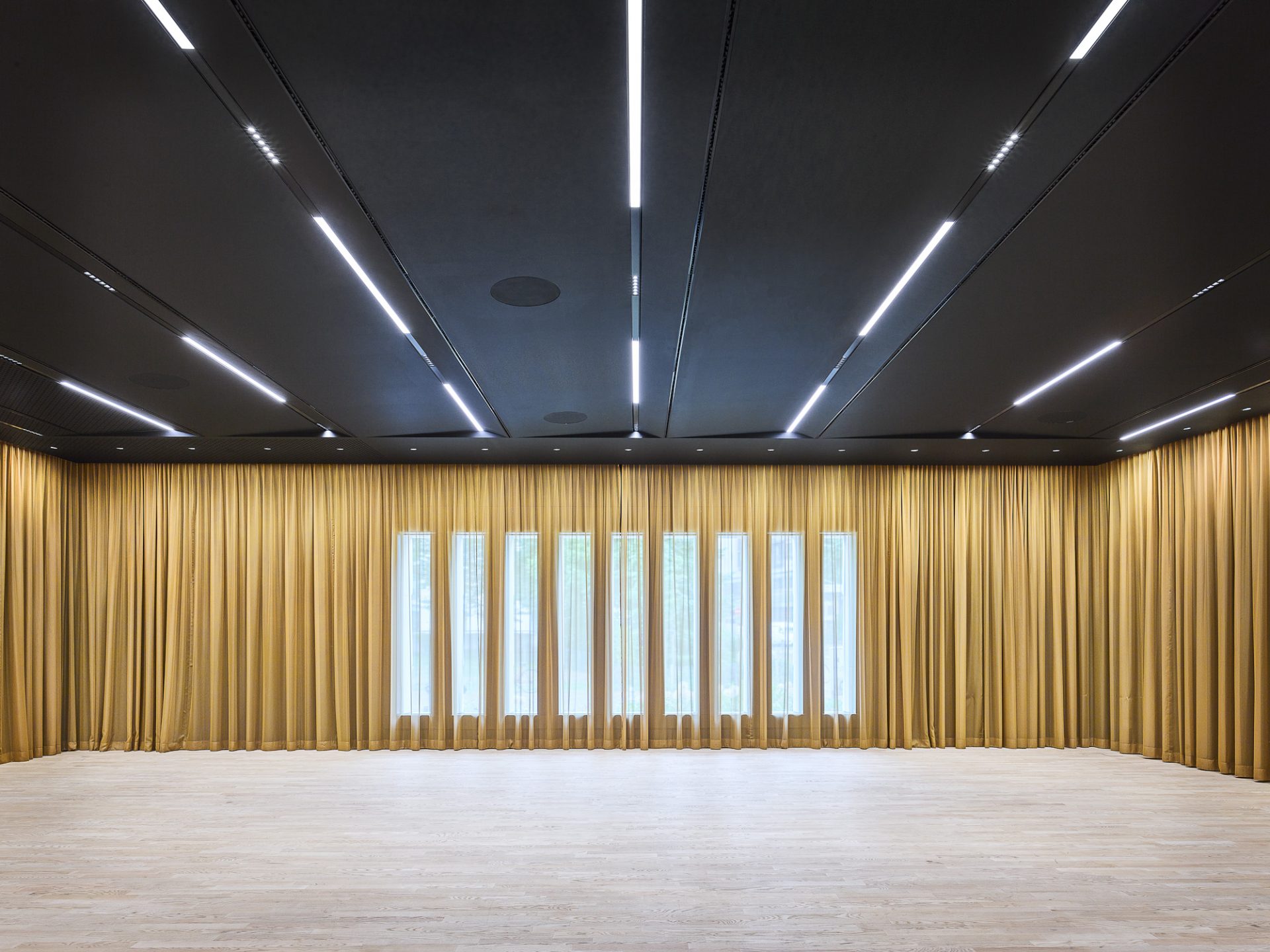 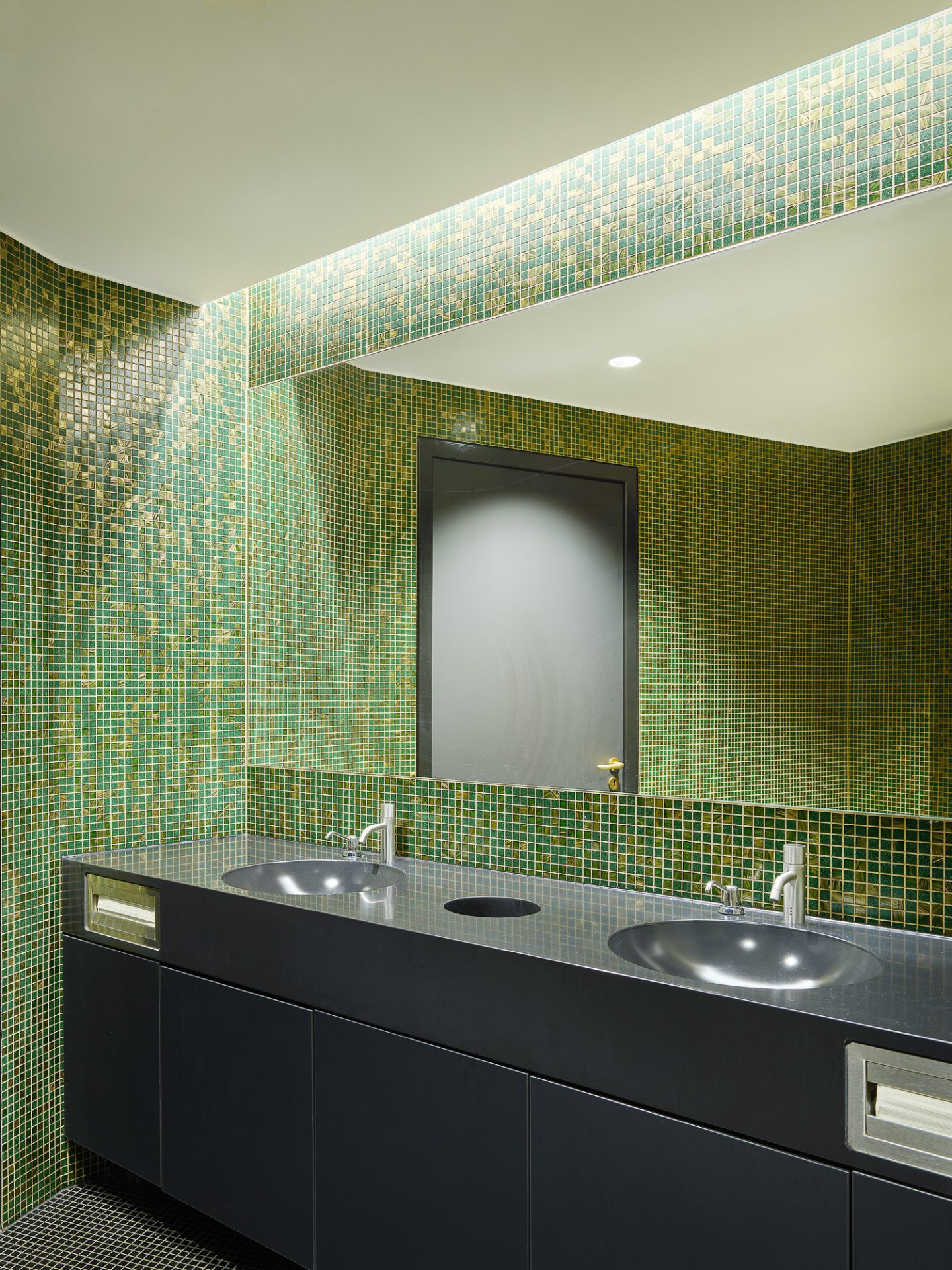 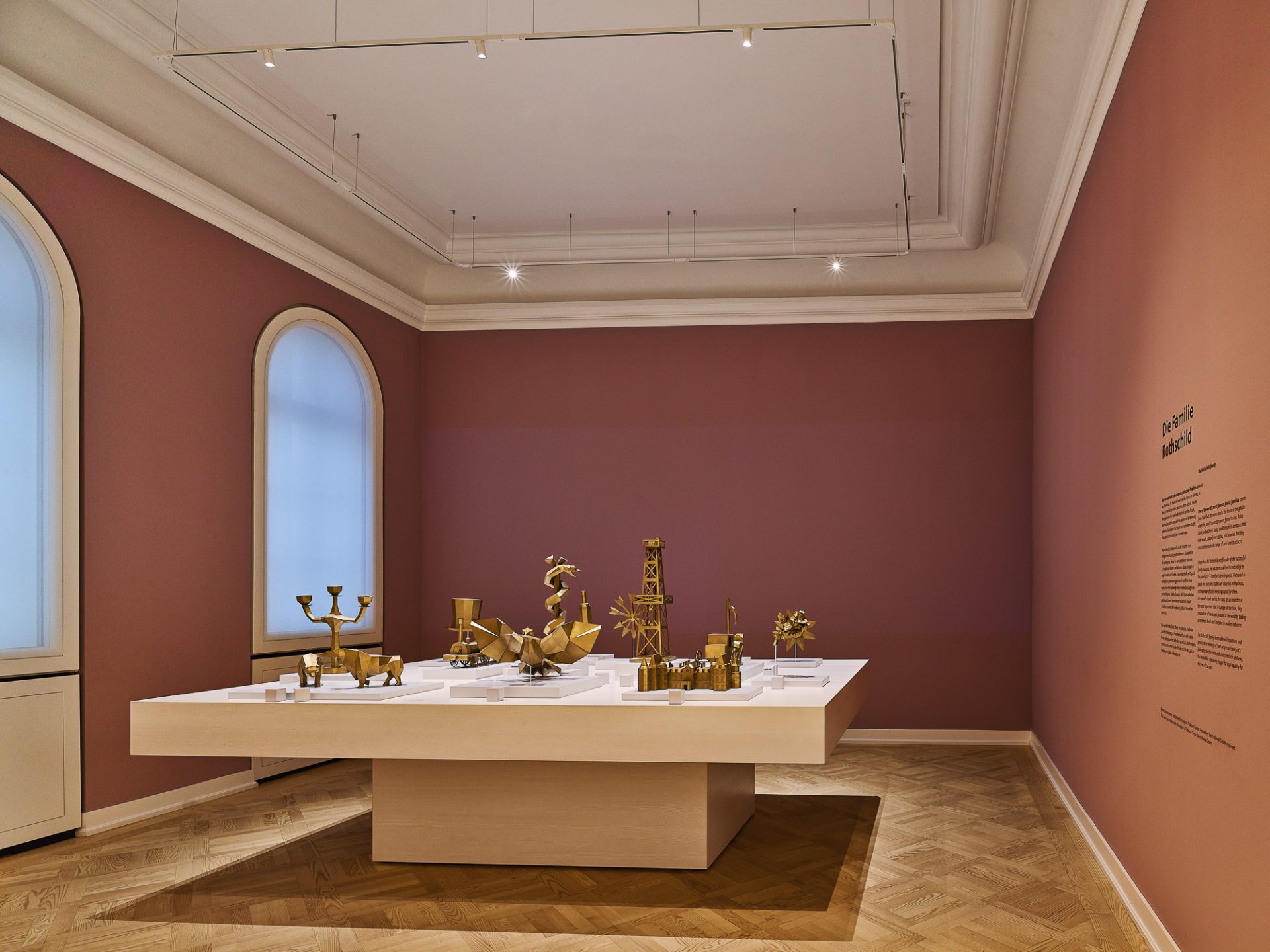 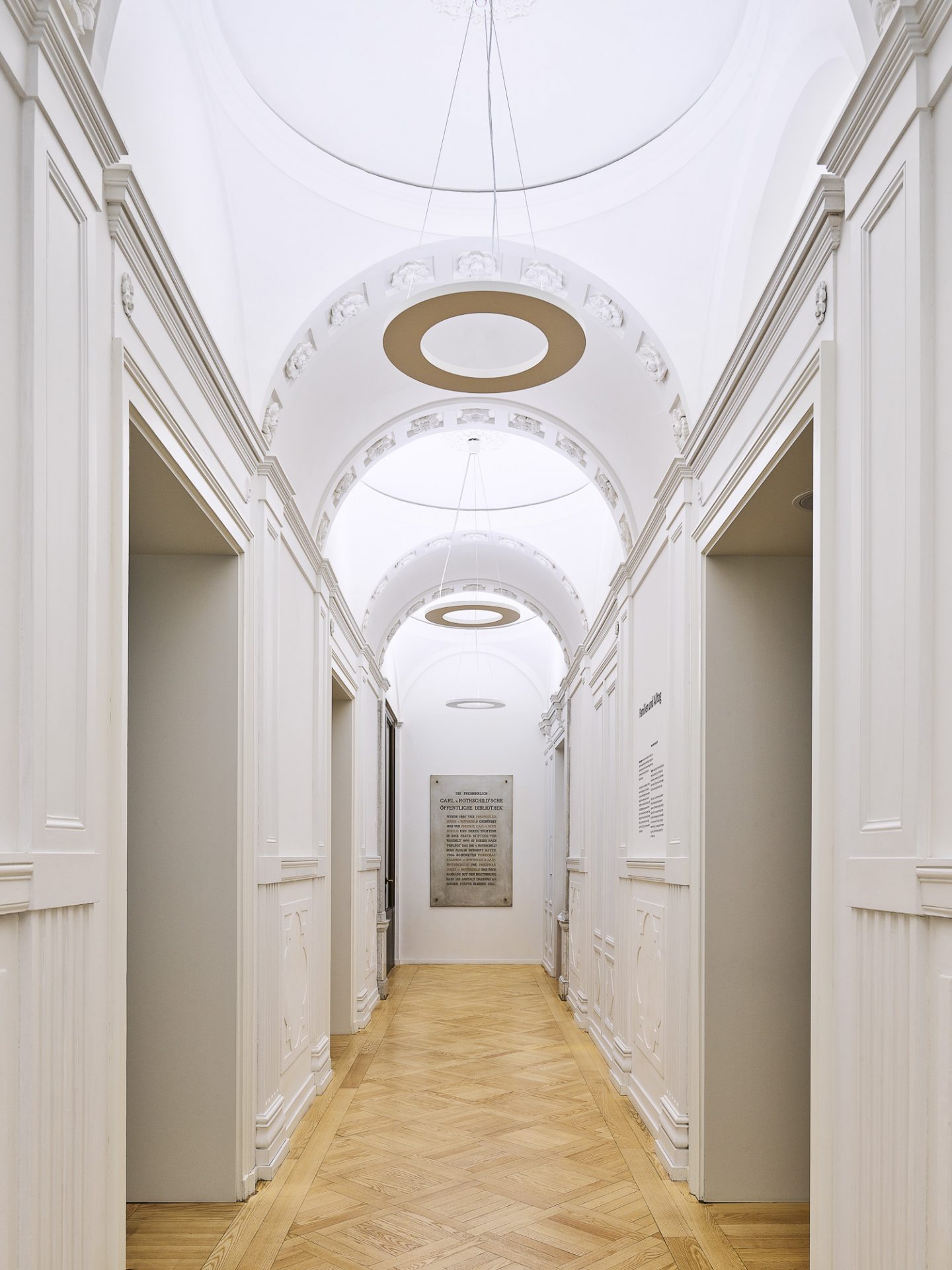 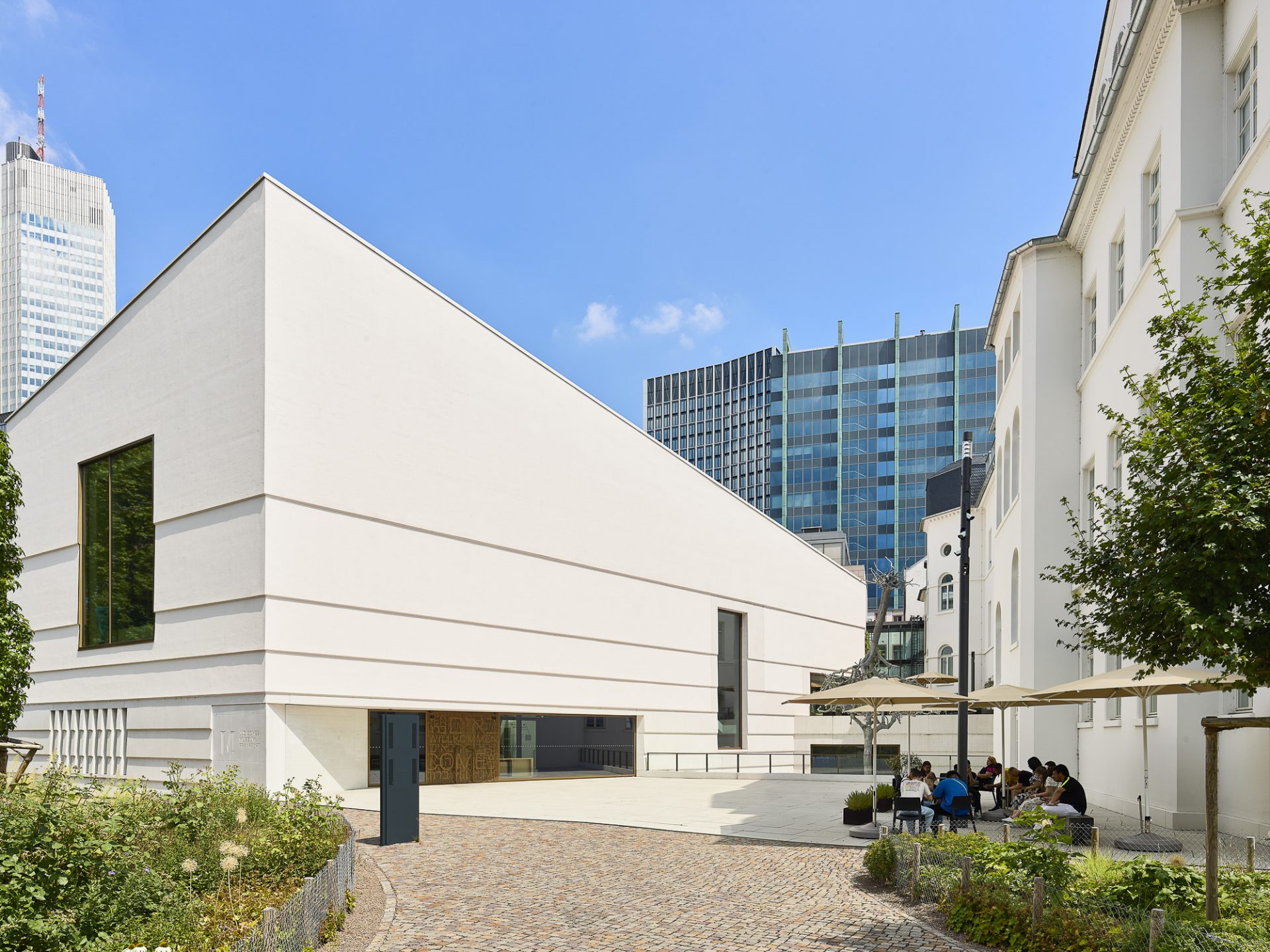 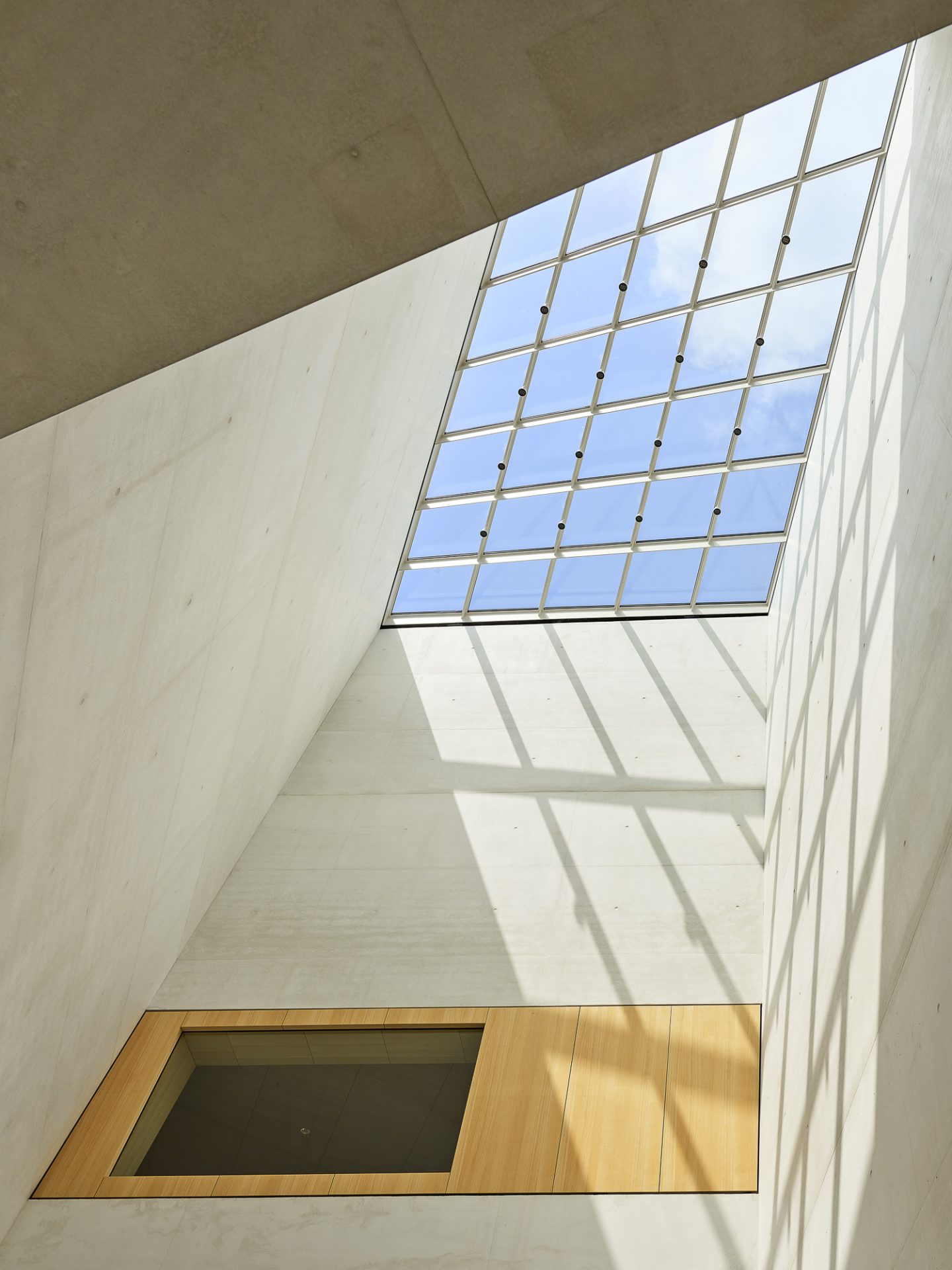 In order to carry the distinct lightness throughout the entire foyer, downlights were integrated into the bare concrete ceiling in both halves of the foyer in a relaxed, dynamic arrangement. In favor of a ceiling soffit that is as undisturbed as possible, the downlights are small-format, flush-mounted and trimless. The atrium between the café and the library receives narrow-beam, directional light from spotlights that are connected to the skylight structure in a uniform grid.

In the library, downlights deliver powerful yet distinguished general lighting, while directional spotlights provide the necessary accentuation in the room. The luminaires are dynamically arranged on the ceiling.

A flexible light channel system finds its place in the lecture hall. An extruded profile is integrated into the ceiling folds at regular intervals, which accommodates an alternating pattern of diffuse lighting components and directional linear downlights. The walls are accentuated by wallwashers on all sides. The individual components can be switched and dimmed separately to suit a wide variety of events and atmospheres.

The stairwell, which opens upwards from the foyer, has a gracefully sculptural appearance. On the facade side, a generous window lets abundant daylight into the stairwell. Meanwhile, diffuse light lines are arranged graphically across the entire façade side in wall recesses, illuminating the stairwell to be bathed in soft light. The functional light on the stair surface is provided by handrail lighting, which can be integrated into very narrow stair railings using LED technology and achieves an exciting difference in brightness in the spatial structure. In the elevator area, integrated linear light coves provide an impactful effect that offers visitors pleasant orientation.

In the restrooms, cove lighting is also used along the mirrors, giving the room a pleasant, well-lit indirect illumination. The additional downlights complement with powerful accents and, together with the elegant wall tiles and furniture, create a glamorous room atmosphere.

In the permanent exhibition area, a minimal rail system is used in order not to overload the historical structure, while at the same time ensuring the highest possible flexibility for the exhibition. For this purpose, spotlights in appropriate dimensions were suspended in the respective rooms and equipped with different track head components, including various interchangeable lenses, wallwasher optics, and gobos from a uniform luminaire family, which react to the exhibits of the permanent exhibition.