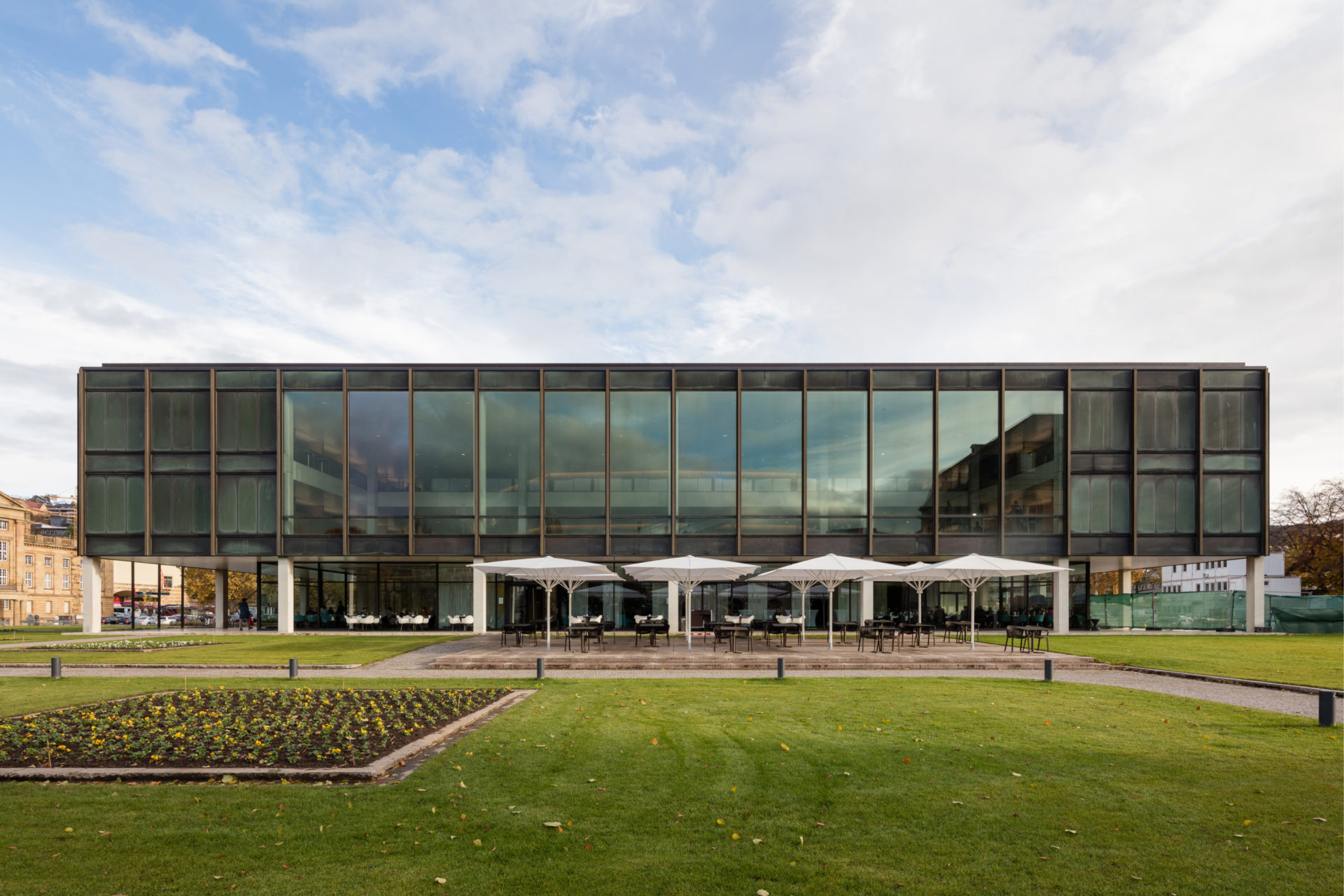 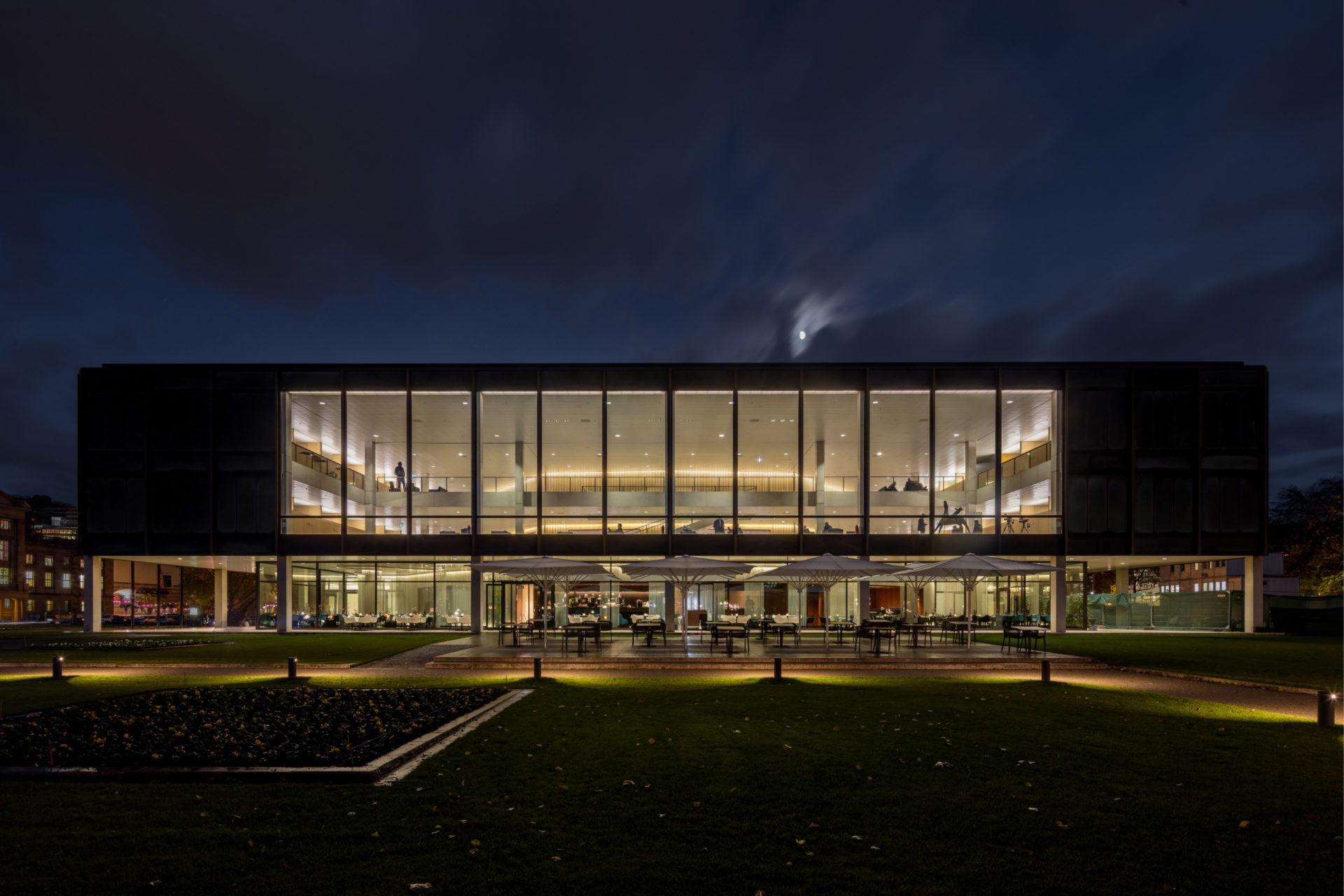 The State Parliament of Baden-Württemberg

For the general renovation of the state parliament building in Stuttgart, the State Administration for Property and Construction had set two goals which seemed difficult to reconcile at first sight: on one hand, the historic registered properties of the building had to be preserved. On the other hand, the assembly hall – previously solely lit by artificial light sources – was to be opened up for daylight. In close collaboration with Staab Architekten an elegant solution was developed, which does not alter the external appearance of the structure characterized by glass and bronze, yet brings daylight even into its very core. In the remaining areas of the parliament building, a consistently LED-based lighting concept celebrates the elegant approach of post-war modernism. 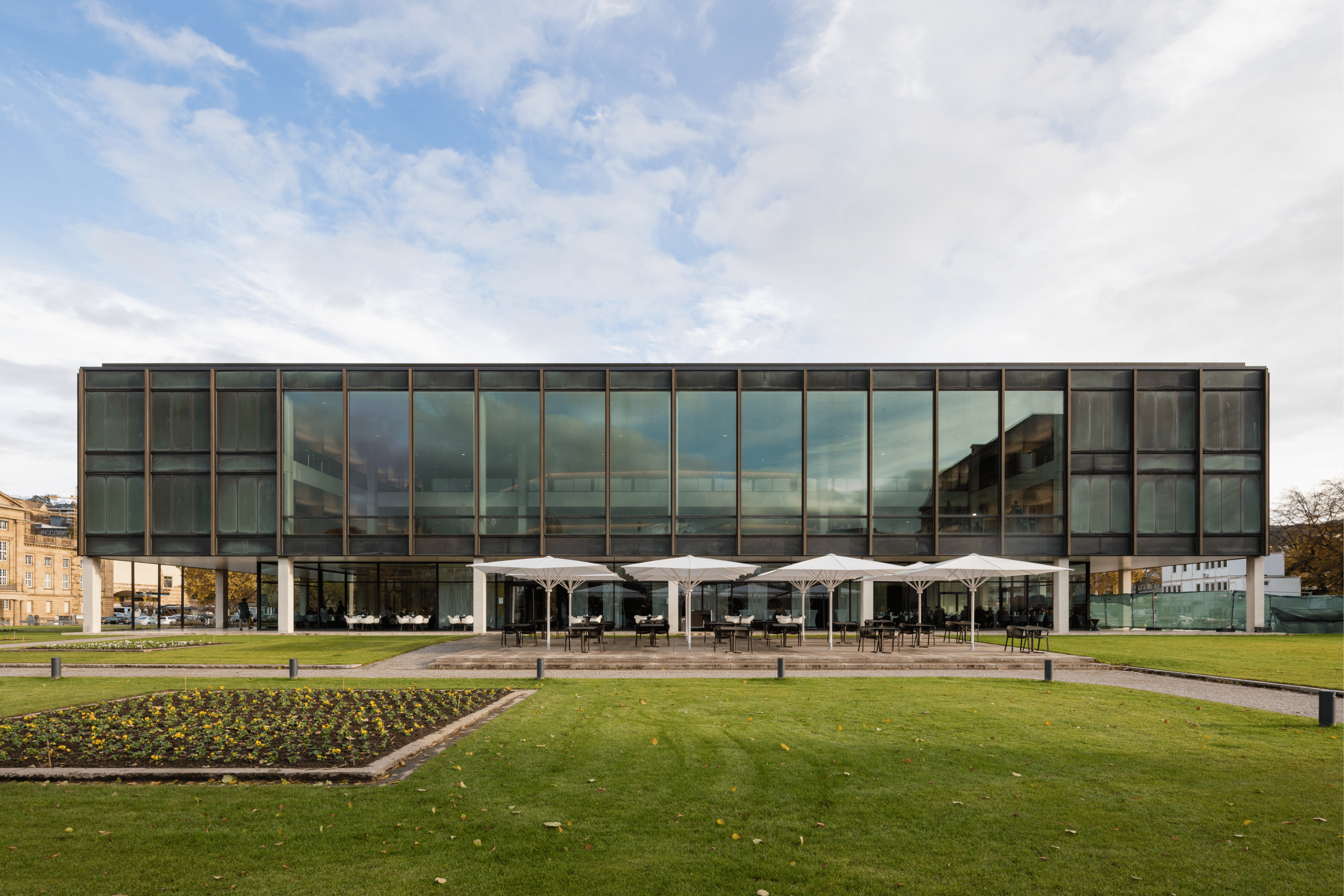 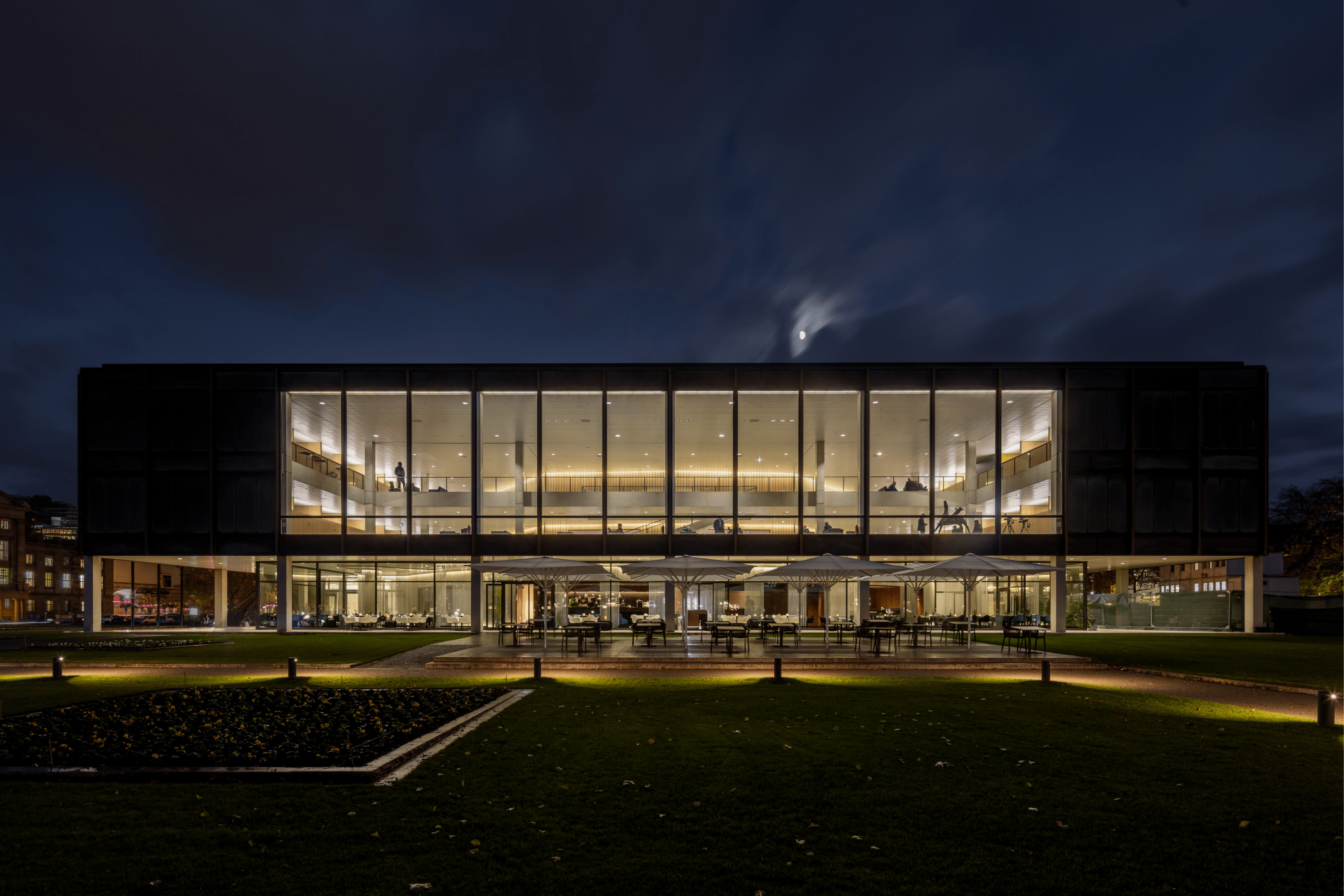 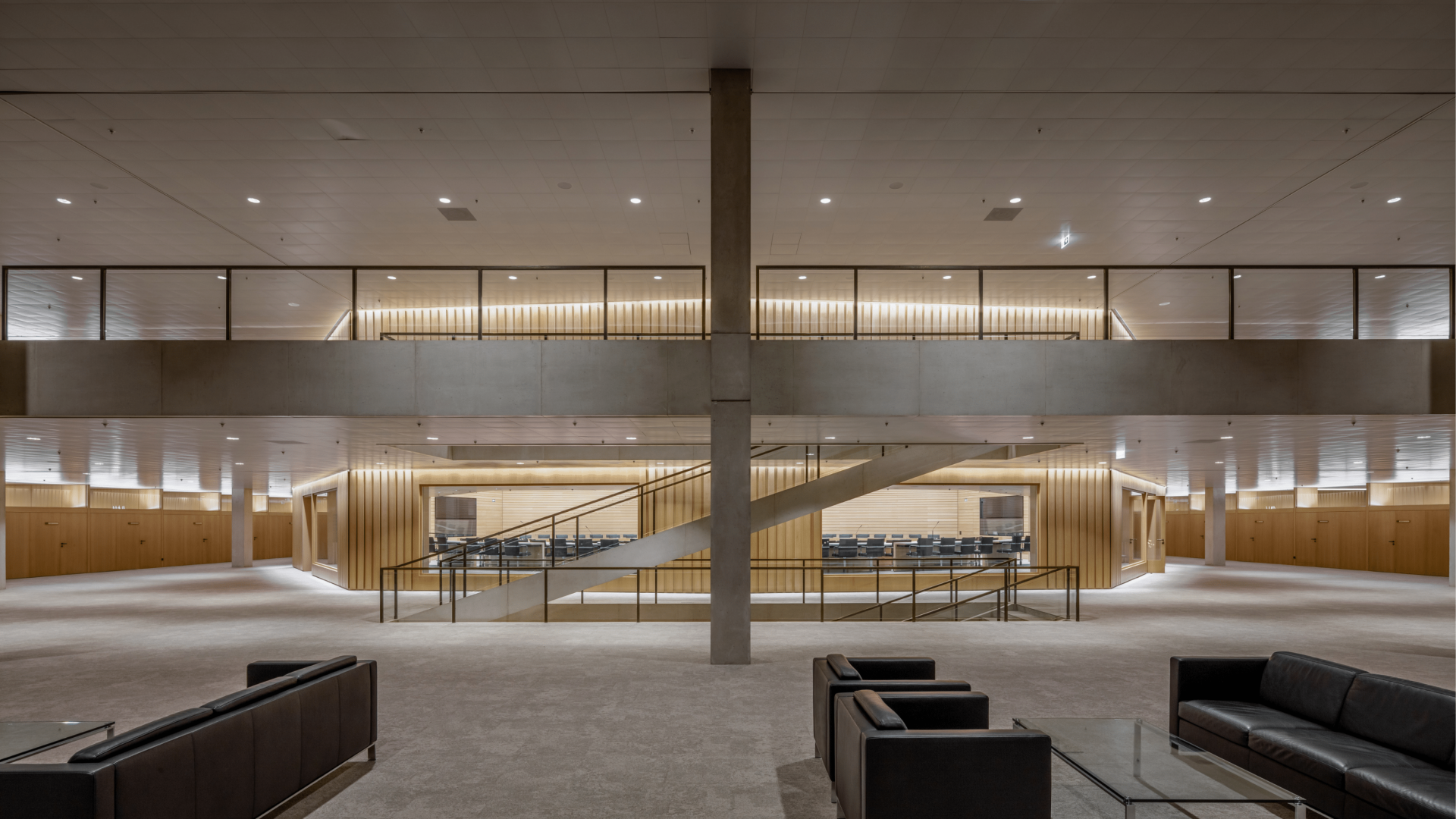 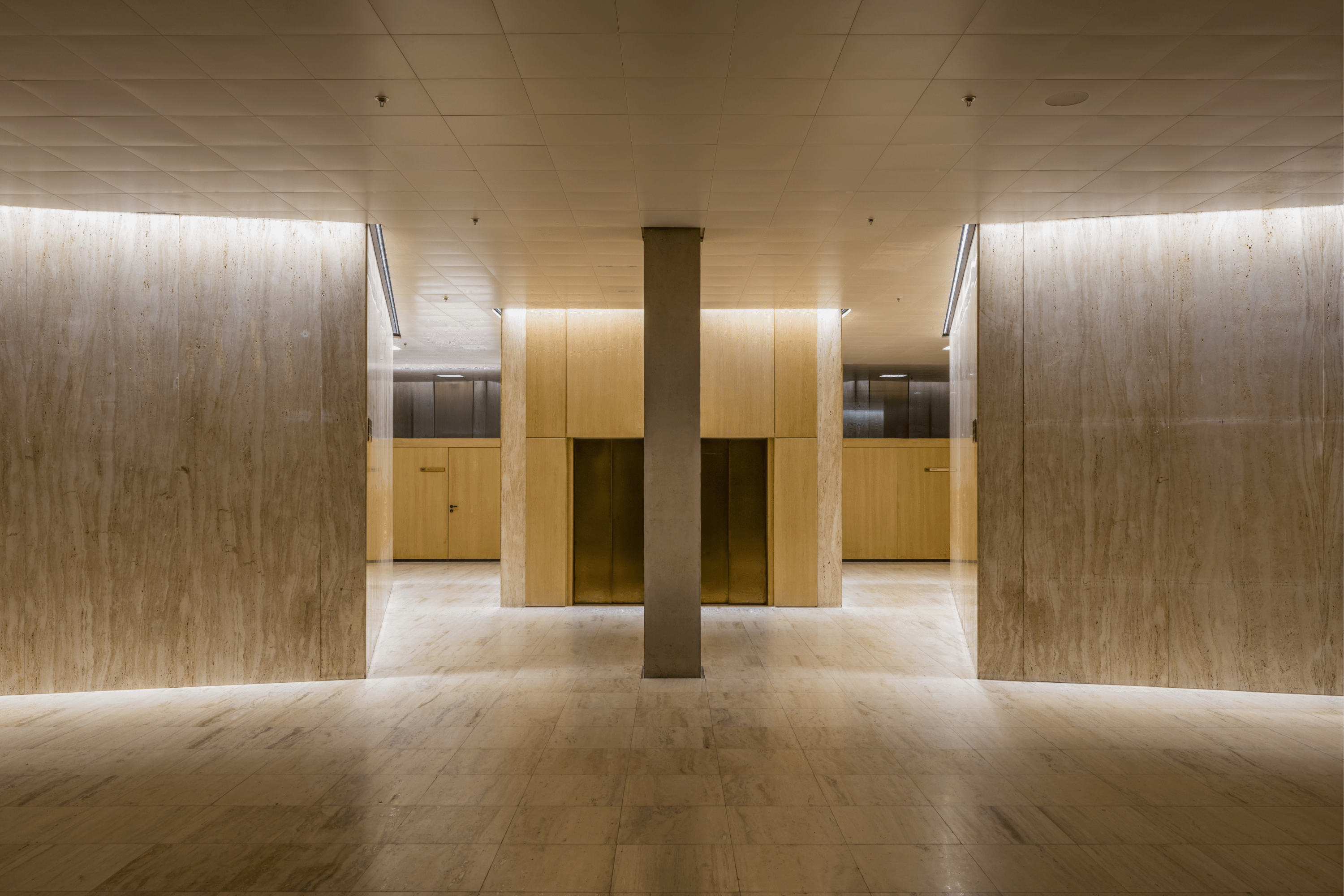 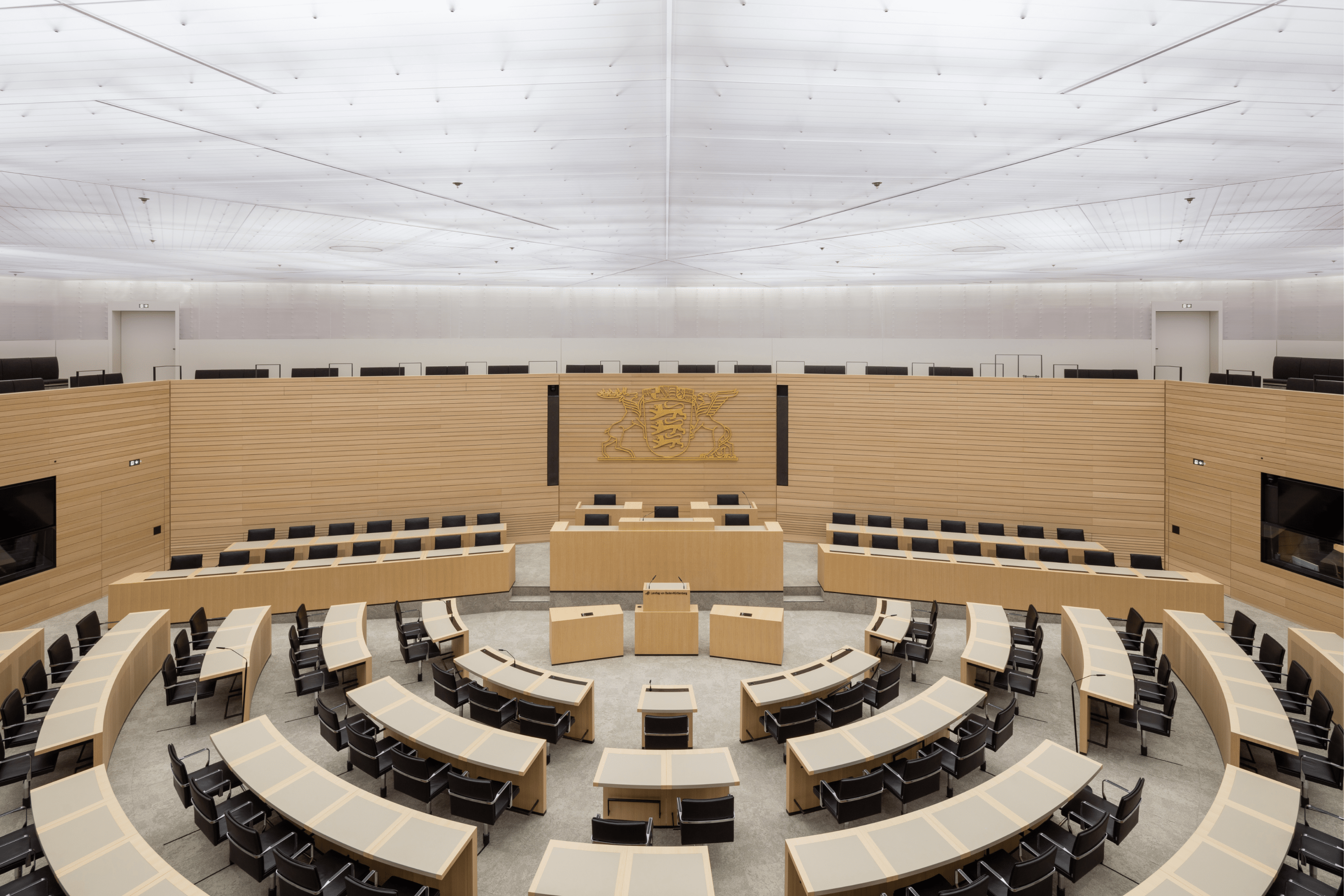 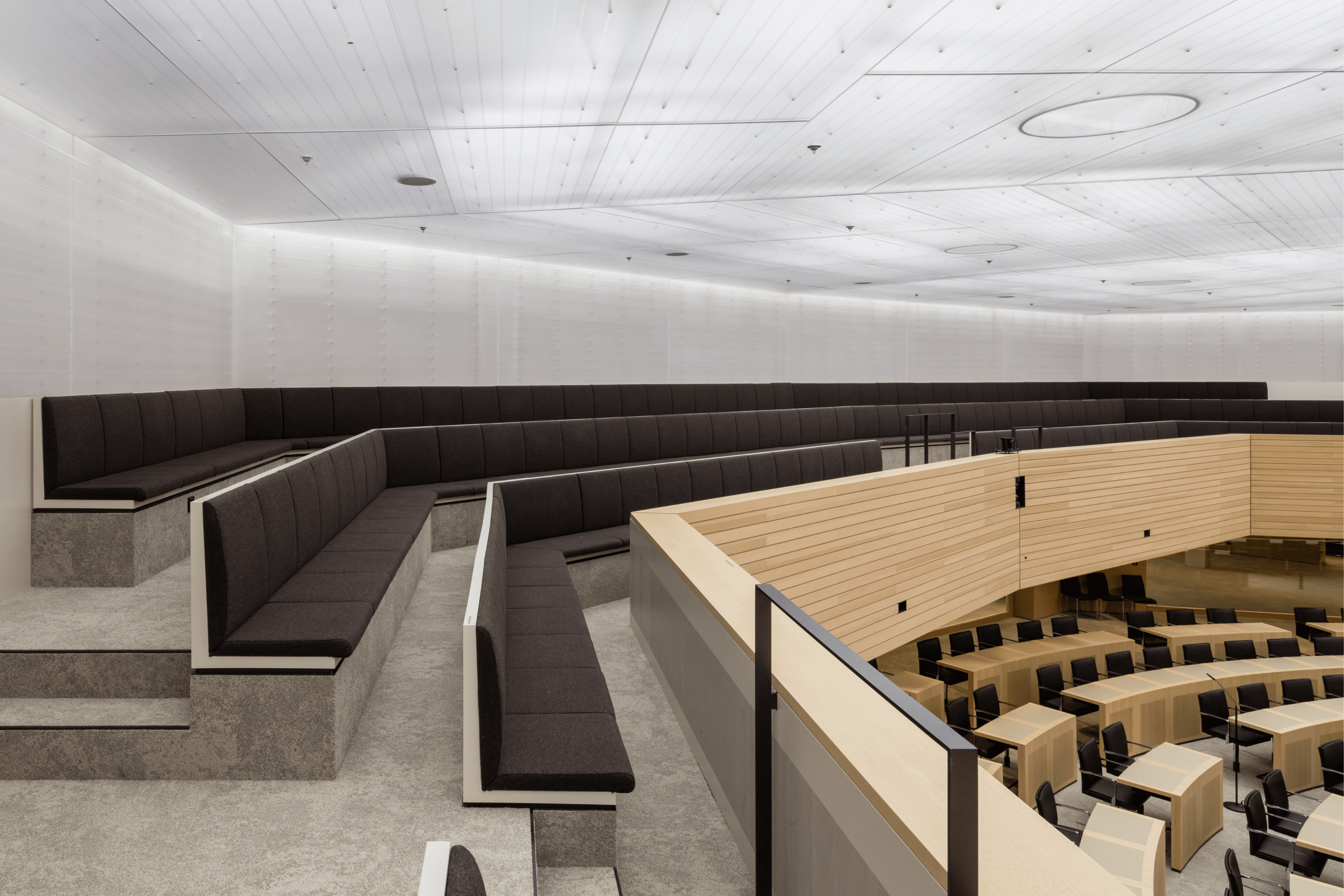 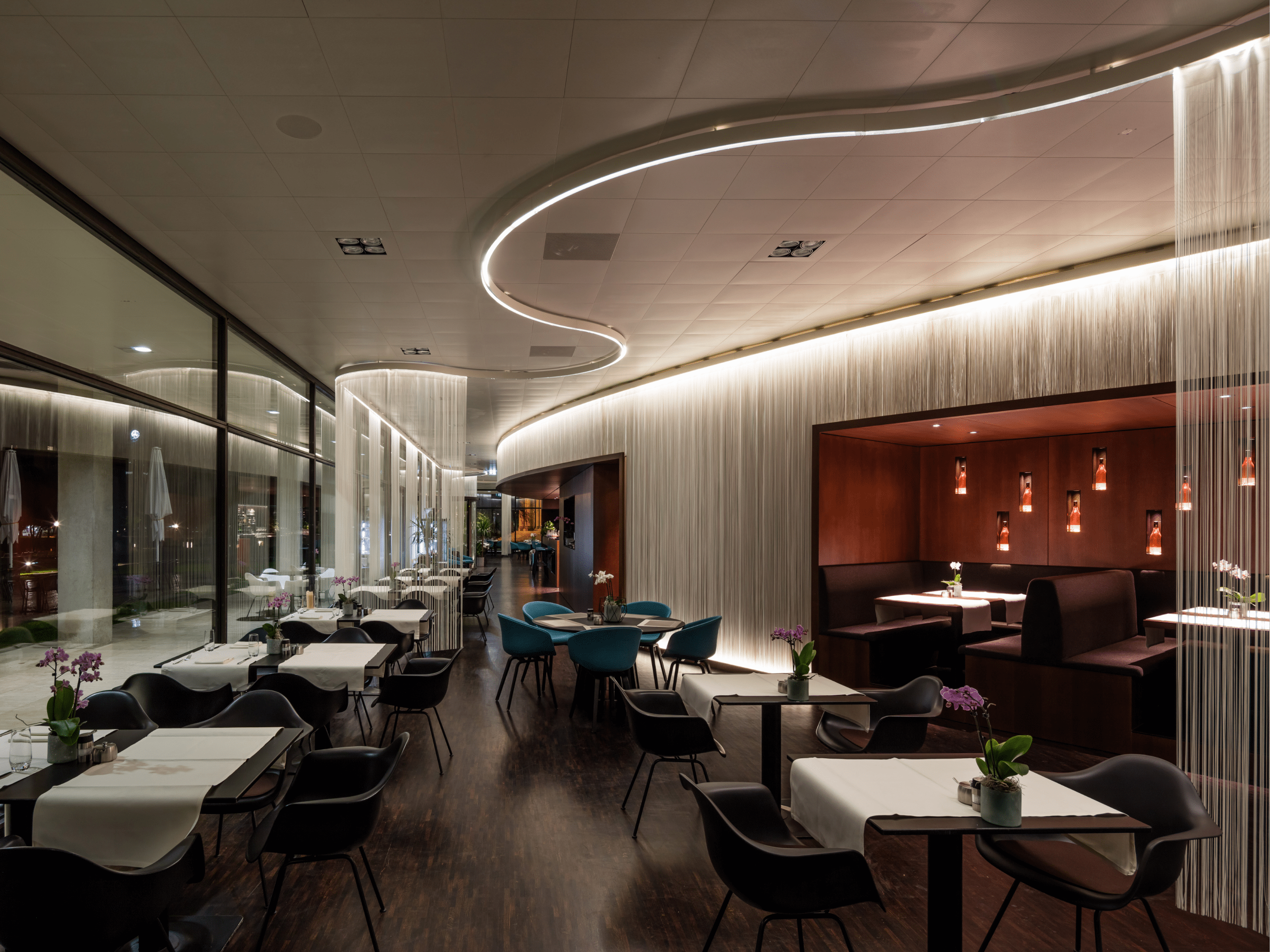 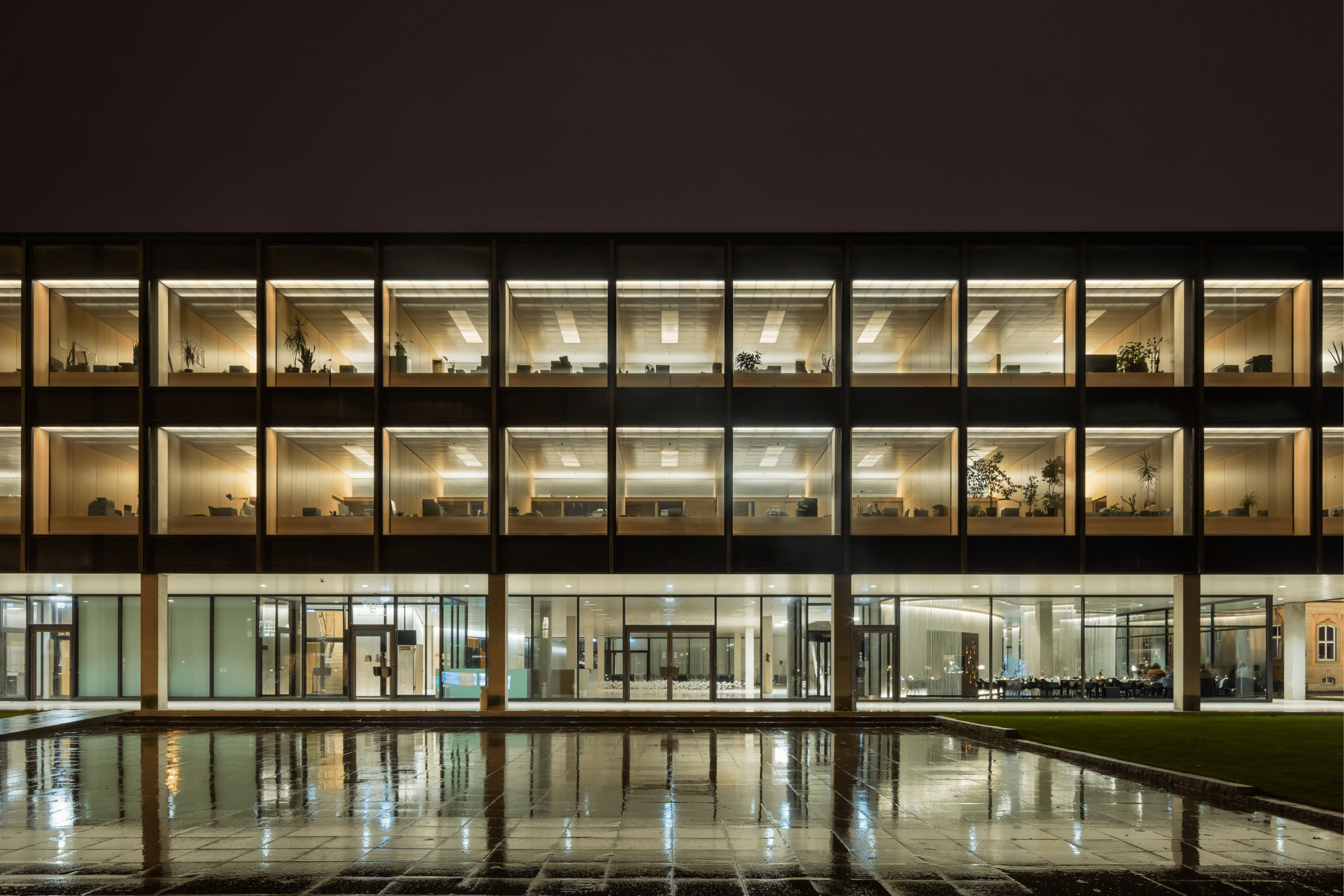 The previously windowless and introverted space of the plenary hall has been moderately opened at its rear, whilst a noticeable influx of natural light and direct visual connection to the outside has become possible by a partial opening of the roof. For this, 12 large circular skylights with a diameter of 2.60 m and 36 smaller ones with a diameter of 0.80 m were inserted flush with the flat roof.

The natural light is transported by an innovative daylighting system and brought into the space via a translucent and satinized ceiling made of plastic panels. For this, large plastic tubes are located directly underneath the skylights. At the small skylights, these tubes are shaped as short cylinders, while long truncated cones are installed at the large skylights. The small cylinders are clad with highly reflective film and end approximately 50 cm underneath the skylights, transporting the light evenly into the ceiling cavity. In contrast, the large, conical daylight openings reach down to the luminous ceiling where they are closed with clear circular panes. The interior finish of the cones is smooth and slightly mirrored, while the outer surface has an opalized finish by use of a special coating technique, giving it a rough feel. This means that they transport some of the daylight down to the assembly hall, while the other portion is emitted over the surface of the cones. Thus luminous volumes are generated within the ceiling cavity, giving the ceiling a sense of vibrancy and depth.

As a result, the natural light arrives as a mixture of diffuse and direct components into the nine-sided plenary hall. The clear end-faces of the cones create prominent light zones, but also enrich the space by allowing direct views into the sky above Stuttgart. The highlight: each seating position is guaranteed a direct and nearly unobstructed visual connection to the sky; the conical detail visually reduces the ceiling thickness, seemingly joining the sky with the edge of the luminous ceiling.

The daylighting system generates vital light atmospheres, with average illuminance levels reaching between 150 lx on cloudy days and more than 800 lx on clear, sunny days. According to the user’s needs, LED light with color temperatures tunable between 2,700 K and 6,500 K, can supplement the daylight to be the sole light source in the evening hours. To achieve this, linear LED profiles were arranged radially around the daylight cones and tubes – similar to the blades of a turbine – and tilted towards their center by 30 degrees. 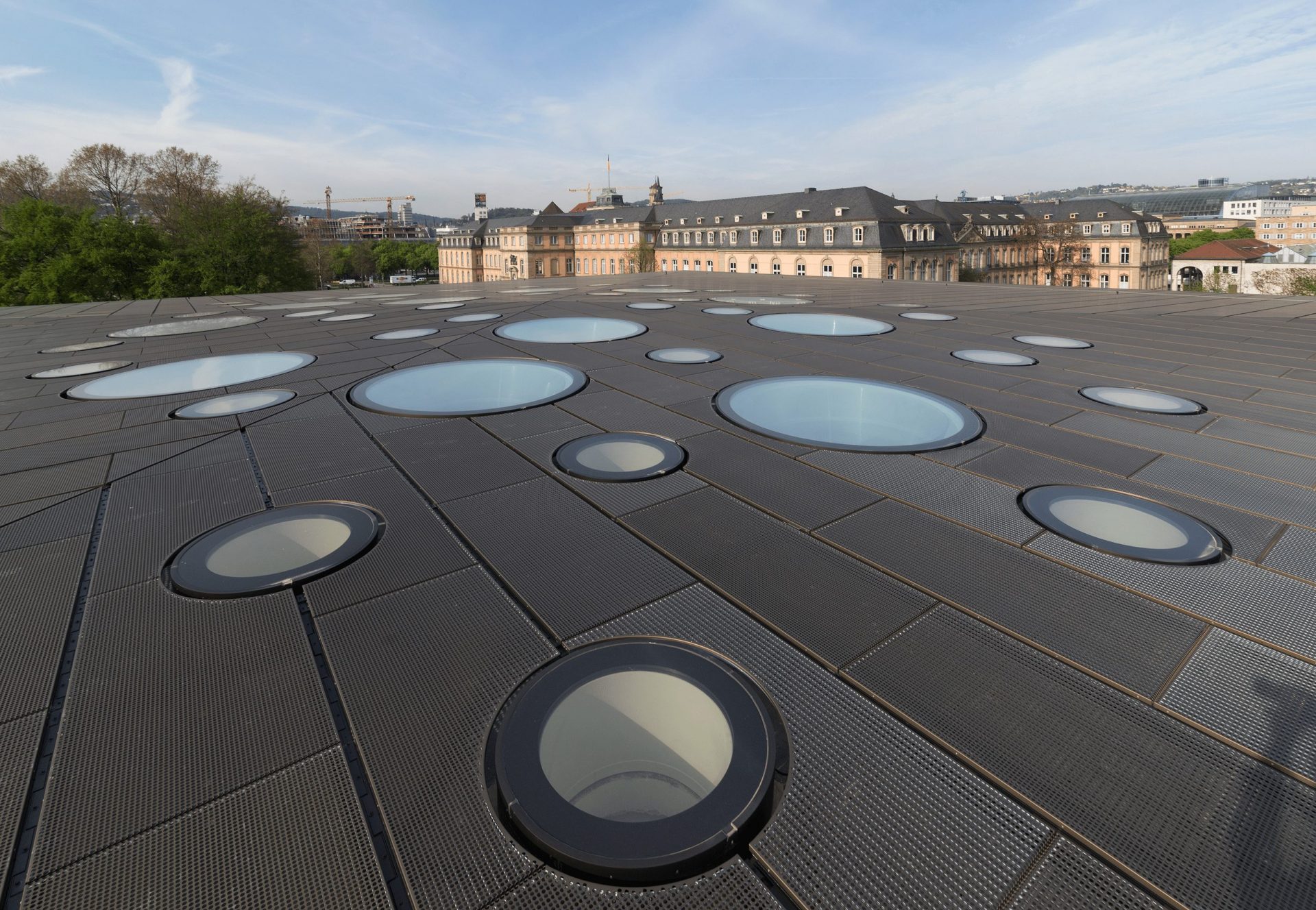 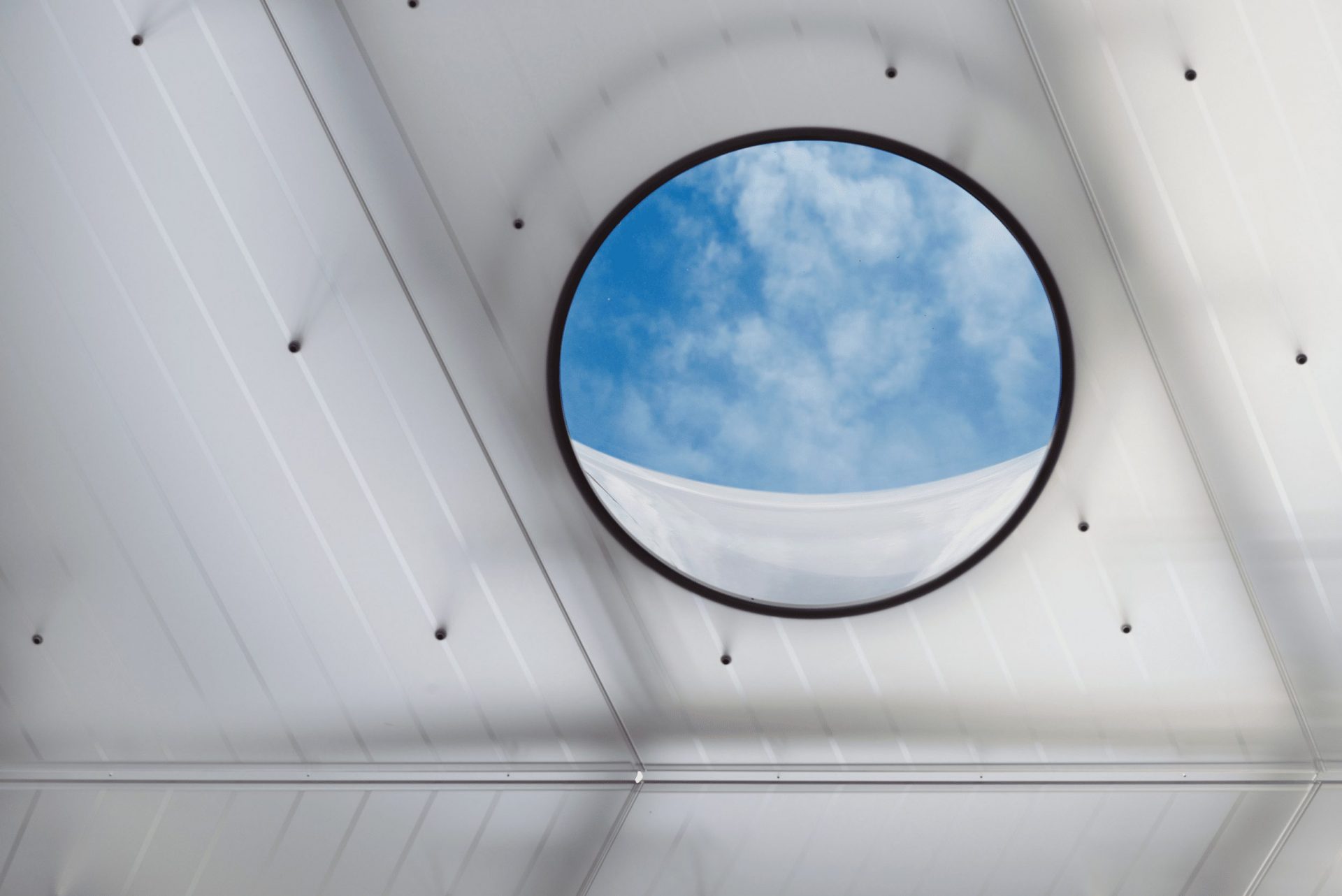 Within the building in several areas the existing lighting solutions’ atmospheric effect called for respectful updates rather than alterations. In the interests of energy efficiency and lighting quality, the technology was brought up to date in these cases, all the while retaining the charm of the existing solution. A good example for such a situation is the foyer, which spans across the first and second floor. With its zoning and elegant simplicity, the existing lighting solution created so much charisma that it was retained in the new concept. Hence, the indirect lighting from the perimeter offices as well as the light cove tracing the outer wall of the assembly hall were maintained. However, all light sources were retrofitted with LED technology and the light levels were adapted to current standards. As part of the redesign in the foyer, the strict grid of the ceiling fixtures was kept, but symmetrically aligned to the columns. The previously pronounced luminaires were replaced by recessed square shaped fixtures with prismatic covers. They quietly and unobtrusively blend in into the ceilings, yet cast a powerful and directed light.

With such a consistently transparent building envelope, the interior lighting clearly defines the exterior perception of the building. Hence, its spatial dramaturgy is easy to read, even in the evening hours: the bronze cladding and tinted windows form the two upper floors into a powerful cube, which seems to float above the ground floor glazing below. The illuminated walls at both the ground floor staircases and the perimeter wall of the assembly hall’s upper floors emphasize the glowing effect of the building. 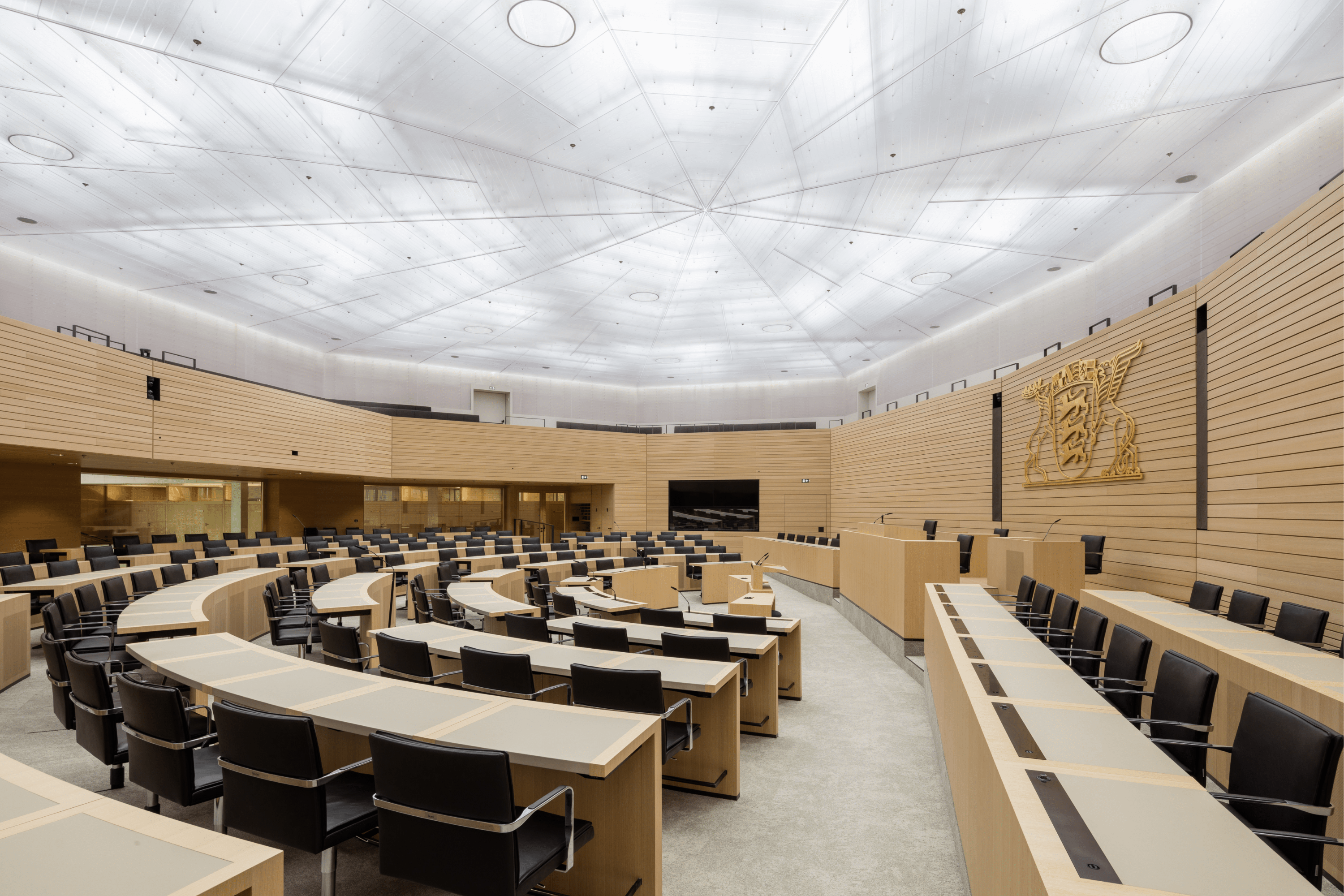 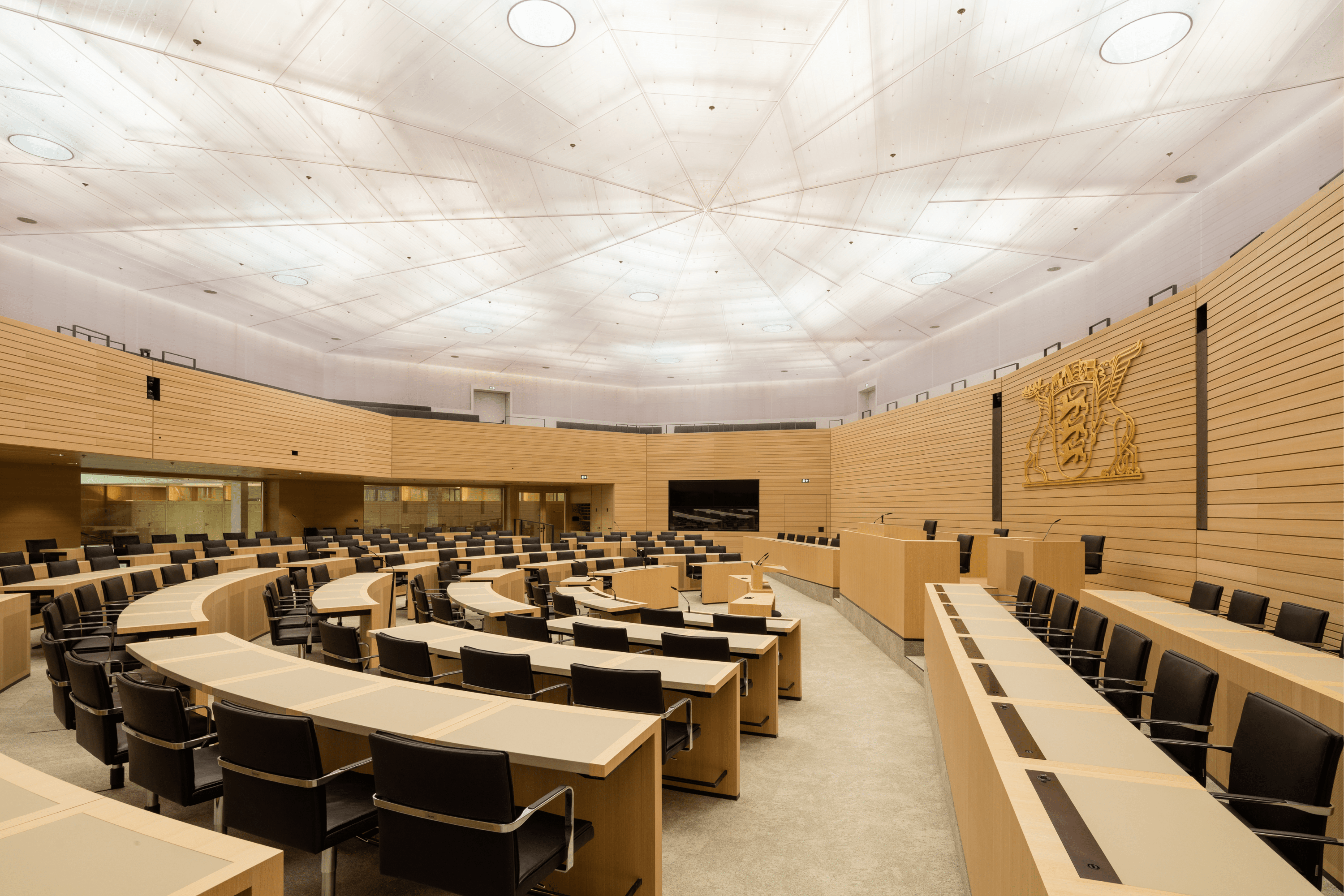