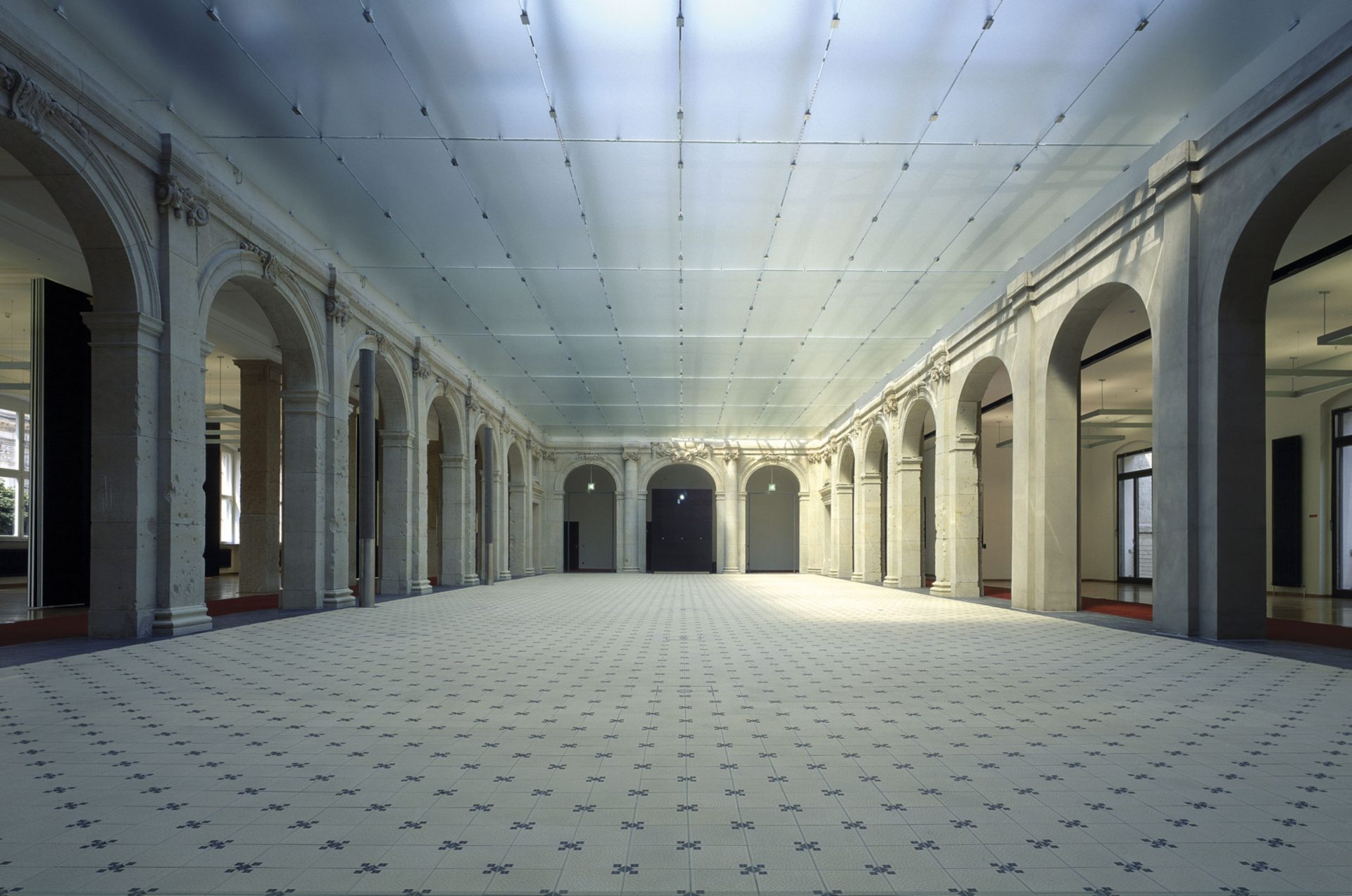 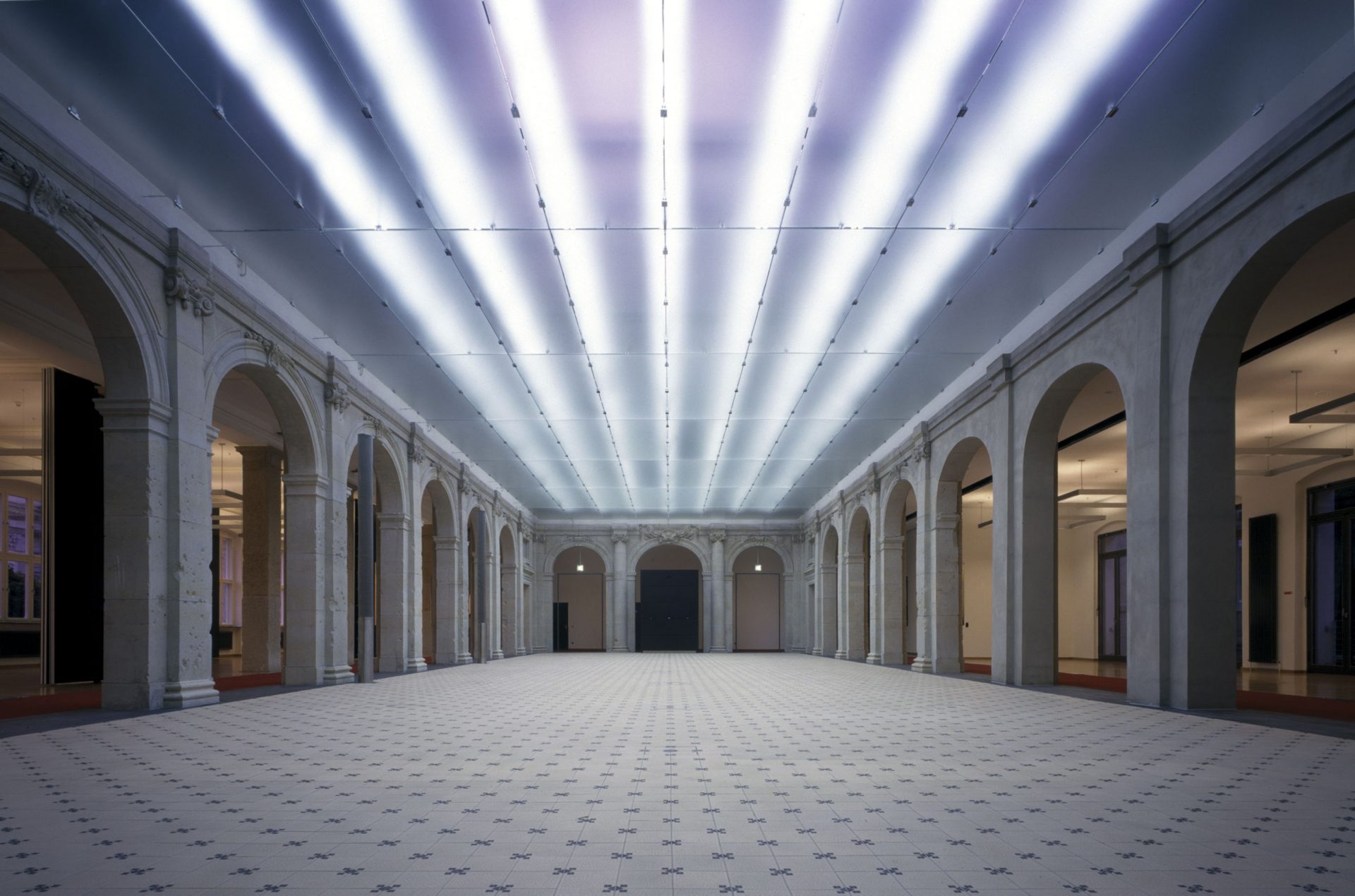 Berlin-Brandenburg Academy of Sciences and Humanities

The original building of the current complex of the Berlin-Brandenburg Academy of Sciences and Humanities was constructed in 1902, near Berlin’s Gendarmenmarkt square, as a 4-storey residential and commercial building housing the former Prussian Bank of Marine Commerce. This oldest part of the building conglomerate contains the space now used for events by the Academy of Sciences and Humanities. 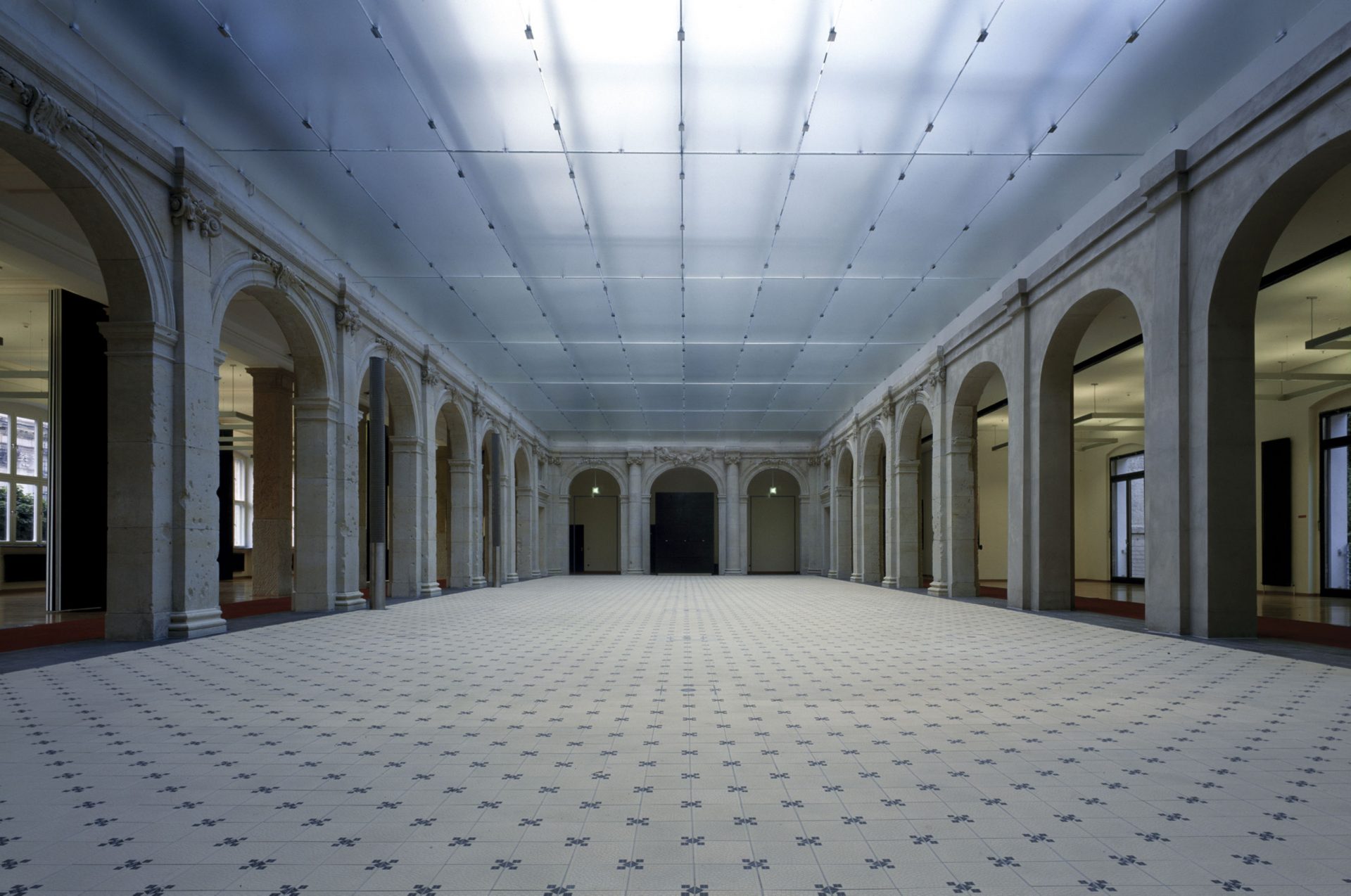 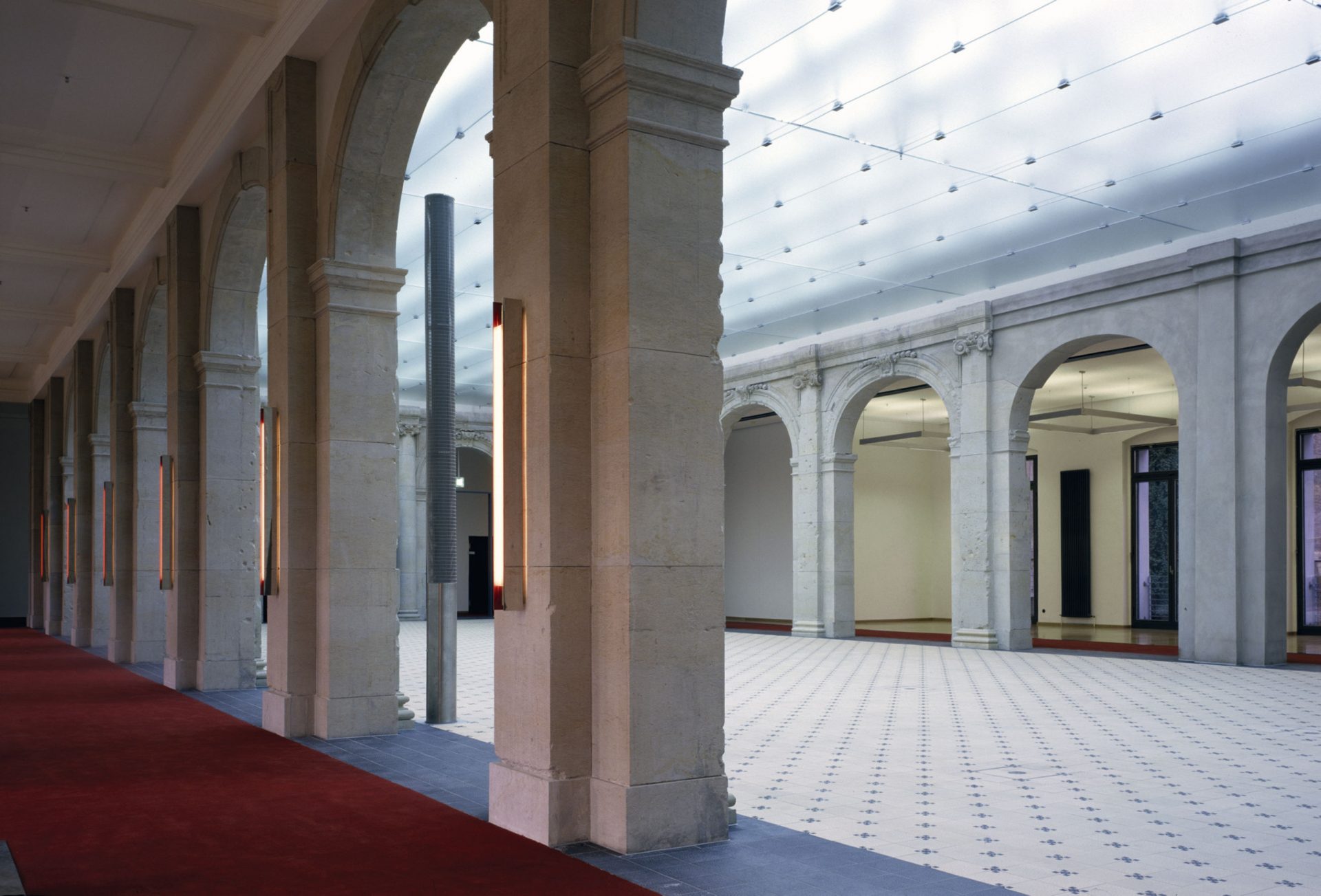 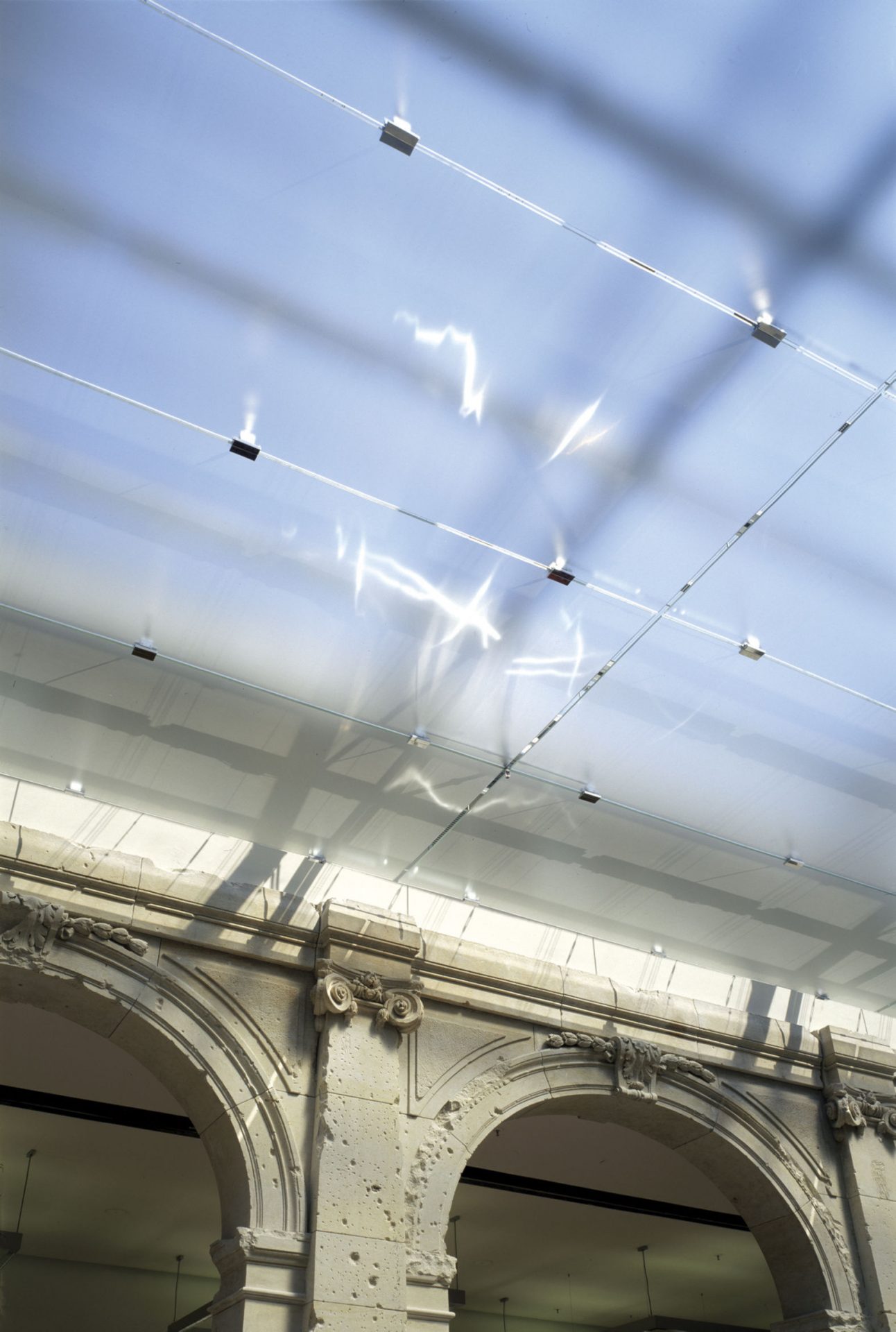 The inclusion of the vitalizing quality of daylight was essential to the use of the space as a lecture hall. The light and weather conditions outside were to be perceptible inside.

Additionally, a supporting artificial lighting system was developed that was well-adapted to the representative character of the space and the requirements of multi-functional use. Parallel to the girders of the roof construction, a linear layout of extremely slender, dimmable T16/T5 reflector light strips has been mounted above the opal glass membrane. The light is directed to the diffusing layer, where the beams overlap. The reflectors shield the ceiling cavity above from the light. The relatively small distance to the glass layer makes the light strips readable as technical elements. The well-balanced frosted glass layer provides a homogeneous general illumination of the hall – independent of seat rows or individual seating variations.

The principle of homogeneous illumination of the central hall has been overturned in the access and circulation zones. The corridors with their linear surface-mounted wall sconces on the pillars of the arches and the gently shadowed zones between the individual luminances take on a certain theatricality and are thus clearly differentiated visually from the hall. Unlike the bright ceiling of the hall, the ceiling surfaces of the surrounding corridors are comparatively dark and shielded to further emphasize the central function of the hall.